The Sterns from Paks - The Impossible Dream 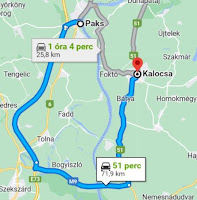 My third-great-grandfather Zelig Stern lived in Kalocsa, but in fact he was born in Paks. Those two towns are not far apart, but they are separated by the Danube so getting from one to the other is a longer drive.

His father is Izak Leib. We don't know his mother's name. Zelig named his eldest son Izak Leib (Ignacz), so we know that Izak Leib died before 1840.

I figured there may be Sterns among the ~500 marked graves in Paks, maybe even Izak Leib himself. We had planned to go Tuesday but Rona suggested we move it to Monday. Good decision.

Keep in mind that after the disappointment in Apostag, I had no illusions, but we arranged for the cemetery to be opened and off we went.

A brief history of the community is here. Paks is different from the other towns we visited - it is hilly, while the others were all flat.

It began with a good sign - an old plastic chair was just inside the entrance. We took it with us both for resting and to make note-taking easier.

The burial area is very large. I can only speculate on how much of that open area contains graves with no tombstones. 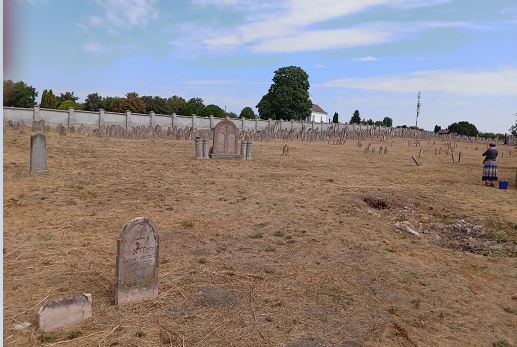 I had no illusions about finding my fourth-great-grandfather in a grave from before 1840, but I thought I might see him named as the father on one of his children's graves. So I was looking for Sterns and and for any reference to Izak Leib or one of its variations. 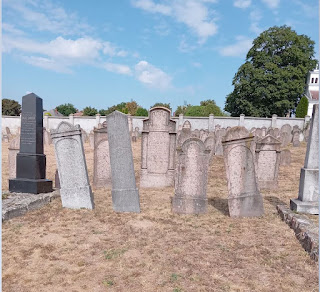 We were not inside for long before I saw this group of eleven stones set aside from the others. Not fenced, just separate. Most are Sterns and a few are Engels. I suspect the two families are related by marriage.

I shall show the most significant ones below, some on both sides, some just one. I will not provide full translations, only the relevant genealogy information. (Esther's is fabulous!)

We saw maybe another dozen Sterns throughout the cemetery, but with no fathers' names it was impossible to pt them together into a whole. One is a kohen, so is not one of ours. 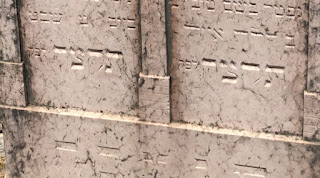 A large number of the graves are legible, some much older than what I was used to. This couple both died in 5595, 1835, which gave me some hope I might find my Izak Leib.

The weather was hot so after nearly four hours we quit and came back the next day.

We also took some pictures for people who were registered in the JewishGen Family Finder with Paks families. 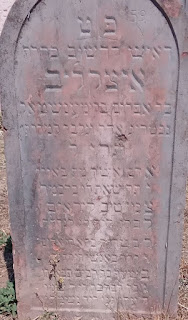 There was a moment of excitement when I found a grave for this Izak Leib, with a nice acrostic as  his epitaph. But his surname was Blumenstock and he died in 5610 (1850), too late to be ours.

After three and a half hours the second day, I had enough. Izak Leib Stern, my fourth-great-grandfather is undoubtedly in that cemetery, but even if he had a legible tombstone, I was not going to find him.

I headed back towards the exit and told Rona I would meet her there. Along the way, something pulled me towards a row I had not looked at and suddenly there was this. 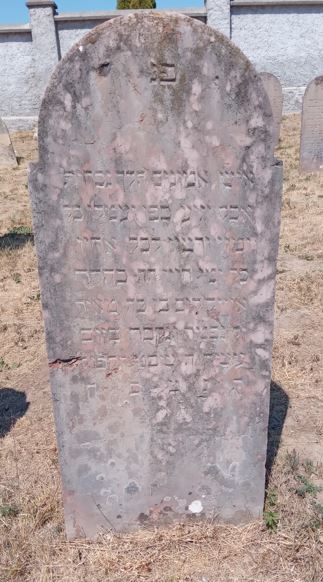 A man of faith, [unclear phrase]

Ate from the work of his hands.

Worked all his days.

Accepted by all his brethren,

all of his life.

May his soul be bound in life.

This stone is 196 years old. Like it was waiting for me.

Now there is no surname here, so all we have is the name Izak Leib and a date before his grandson was named for him in the late 1830s.

But this really felt right. This was the very end of my research trip and I wandered straight to him.

Paks was never a large community and even in 1869 there were fewer than 1200 Jews. Were there multiple Izak Leibs? Aside from Blumenstock?

I have a rule for myself. When I do not have enough proof yet I am quite sure of something, I want to have one more piece of supporting evidence.  The three putative brothers, all Sterns and sons of Esther,  from the group of eleven graves are Shalom, Peretz and Meir. This man's father is Meir.

I think I am going to claim this man as my fourth-great-grandfather. That puts a cap on the trip.

But I will nonetheless go through the Paks records at Family Search.