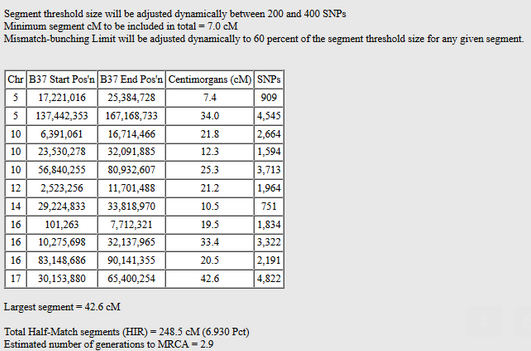 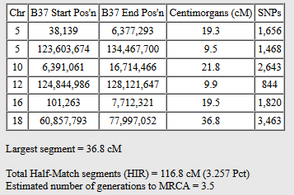 A Very Deep Connection or Just A False Segment

Every few months, I look at the recent FTDNA matches of my 100+ family kits. I save all those which the company calls "third cousin to fifth cousin" or closer, put them in separate spreadsheets for each of my families and sort by match names. Then I go through them painstakingly looking for matches which look worth following up, based on the longest matching segments. Most of my fully Jewish kits have 2-300 such matches.

Then I write to the matches and ask them to give me their GEDmatch kit numbers so I can run the match against each family, using the indispensable Multiple Kit Analysis on Tier1.

In this round, covering the previous five months, I wrote to eighty-nine people and after two weeks thirty-one have responded. I consider that a good rate of reply, perhaps helped by the fact that people are stuck at home with nothing to do. Some of those give me other family kits to check as well.

It is rare when one of these turns out to be an actual, identifiable relative - either of mine or of some of my cousins - but I find the exercise useful in giving some direction. (I plan to write about a new actual relative later this week.) I also get an occasional new match on one of my special segments, such as the right end of chromosome 21.

Then there is Helen's match.

Helen has a run of the mill match on chromosome 19 with six Pikholz descendants which is too small to be useful, probably going back well before 1800. Not only is it small, but it only includes a few of the twenty-odd family members who might match that segment.

On chromosome 10, Helen has an unusual match with both my half second cousin Fred, my fifth cousin Cyndi (over 15 cM) and Cyndi's brother. Fred's only Jewish grandparent is my paternal grandmother's half sister, so matches with Fred do not have the endogamy which so complicates our Jewish research. This should be my great-great-grandmother's Zelinka from Trencin County Slovakia, where they lived since at least as far back as the mid-1700s.

On the other hand, we have tests from descendants of my grandmother and her full brother and sister and they do not share this segment. So perhaps this segment is from Fred's grandmother's other side, who lived in Budapest.

None of this rings any bells for Helen.

Then I ran Helen's kit against my mother's side and found these two segments on chromosome 7. The one on the left is about 12 cM and the one on the right is 18 cM. The matches are with one of my first cousins and his nephew. Since there are no matches with the rest of my family, this clearly appeared to be on my cousin's mother's side, where the known surnames are Kalson (or Keilson), Sadofsky and Brinn, all from Lithuania.

Then I took a more comprehensive look. The segment on the right includes five near-identical matches of nearly 8 cM with my brother, two of my sisters, my paternal second cousin Susan and Fred. And everyone triangulated with everyone else.

There seemed only three possibilities. Perhaps my maternal cousins' Lithuanian ancestors and my own Slovakian Zelinkas or Rosenzweigs had a common ancestor who left us some common DNA. Perhaps the set of seven small matches were a false segment that somehow carried through to five descendants of my great-grandparents. Or perhaps only Fred and Susan's segments are false and this segment is on my mother's side, shared with her brother's son and grandson.

That third possibility seems wrong to me. But I am not enamored of either of the others.

But Helen has one other segment that may shed some light. On chromosome 10, Helen has a segment of 15 cM with Fred and 10 cM with my cousin's nephew. And they triangulate.

It is hard to call this one false. So there really appears to be a long ago common ancestor of my Slovakians and my cousin's mother's Lithuanians.

I think. Helen, of course, has no idea.
Posted by IsraelP at 3:38 PM No comments: