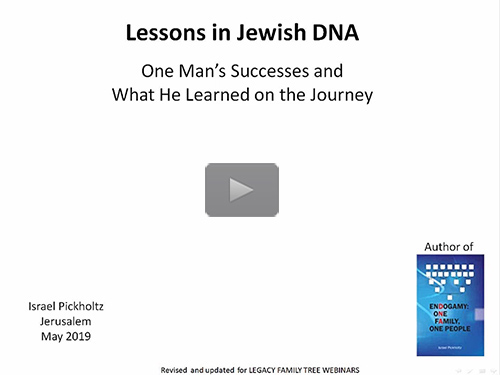 The recording of today's webinar, "Lessons in Jewish DNA: One Man's Successes and What He Learned On the Journey” by Israel Pickholtz is now available to view at www.FamilyTreeWebinars.com for free for a limited time.

The hottest topic in genealogy in recent years has been genetics and many thousands of genealogists have ordered DNA tests. Most of those haven't a clue what to do with their results. The situation is more complicated among Jews, who have married "within the tribe" for hundreds of years, thus ensuring that everyone is related to everyone else, multiple times. Marrying within a closed community - "endogamy" – has barely been addressed by the non-Jewish genetic genealogy community. This presentation – as in the speaker's book" ENDOGAMY: One Family, One People" – does not bring a "how to" approach, as every family is different. The speaker prefers a "how I did it" approach, demonstrating the successes he has had in his own families and the general lessons which are applicable to all genetic genealogy research. His goal is to inspire his listeners and readers to say "I can do this!"
Posted by IsraelP at 7:03 PM No comments:

Redemption of a Fifth-Generation First-Born Son

So commands the Torah. We redeem our first-born (to the mother) sons, whom we "owe" to G-d because he did not kill them in Egypt. In Bamidbar 18, 15 the Torah tells us that this is to be done when the child is one month old and that the price of redemption is five silver sheqalim. The rabbis later clarify that this mitzvah is only relevant if neither parent is a Kohen or a Levi, so the chances of a redemption ceremony in any Jewish family is probably not much more than forty percent.

The ceremony (called pidyon haben) is highlighted by the kohen asking the father if he wants his son or the five sheqalim and the father says that he wants to redeem the child. This is followed by two blessings by the father, several verses by the kohen and wine. Then everyone eats. And perhaps someone speaks.

My late father was a first-born, as am I. So when my first-born son's first born son became a father last month, the baby is a fifth-generation first-born to be worthy of a redemption ceremony. The kohen was one of my grandsons rabbis in his Lakewood yeshiva. There were about forty people in attendance. I made last minute plans to be there - unannounced - but it didn't happen. (See my next blog for that story.)

The kohen for both my father and me was my grandfather's brother-in-law, Uncle Harry Katz. I didn't really know him, my only memory was from going to his shiv'a when I was ten. As it happens, one of Uncle Harry's two granddaughters lives about an hour drive from Lakewood, so I asked her to join us. She was planning to but when my plans were aborted, she decided to skip it. (Rhoda is named for her grandmother, Uncle Harry's wife, who was named for our second-great-grandmother Rivka Feige Pikholz.)

The baby is named for his mother's paternal grandfather whose first yahrzeit was the day of the pidyon.

My trip was aborted, but I told them that I fully intend to attend the pidyon of first-born number six in twenty-five years.