I recently upgraded the Y-DNA of one of my Gordon cousins to Y-111. This is my mother;s paternal family.

Results came in this morning.

He has one match at a genetic distance of 2 and the match is also a Gordon. The match has not done a Family Finder, but I have written him about autosomal testing and GEDmatch.

This is what FTDNA predicts about the most recent common ancestor. 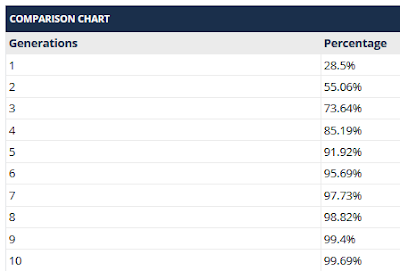 He has two matches at a genetic distance of 3. Those two have the same surname, but it is not Gordon.

My cousin has twenty other Y-111 matches, none of whom are Gordons.

I shall be curious to see where this goes.
Posted by IsraelP at 10:22 AM No comments:

I took advantage of the ongoing sale at Family Tree DNA to upgrade my Y-DNA test from 67 markers to 111 markers. (I have already done Big-Y.) These results were due on 5 September, so good for FTDNA for being quick.

At sixty-seven markers, I had perfect matches with two other Pikholz descendants from Skalat. One goes back to an ancestor (Mordecai) born ~1805 who is probably the brother of my second great-grandfather (Izak Fischel). The other goes back to an ancestor (Nachman) born ~1795 who is probably an uncle or cousin to Mordecai and Izak Fischel. Both of those have tested only at sixty-seven markers.

I have seven matches at 111 markers and they and the two Pikholz are my closest matches at 67. (There are some other close-ish matches at Y-37, but I'll ignore most of them for now.)

I was surprised to see the increase in genetic distance across the board, from three to six of the forty-four additional markers. That seems a lot. The most important matches are the two Spira matches which are perfect or nearly perfect with me at Y-67 and now are significantly further away. (There is another Spira - the one we call the Z-Man - who is perfect with me at Y-37, the limit of his test.)

The question is do the new mutations represent a distinction between the Pikholz group and the Spira group, or is this something at least partially particular to my personal line. Perhaps it will tell us something about the distance between Izak Fischel and Mordecai on one hand and Nachman on the other.

I suppose I shall have to upgrade the other two Pikholz kits in order to answer that question. The sale continues for another two weeks.

There are others who match me at a genetic distannce of five or six at Y-67 and are now beyond the match criteria, so they too would represent increases of six or more.

In the meantime, I have submitted this new data to the project managers for their consideration and comments.
Posted by IsraelP at 4:23 PM No comments:

We Don't Know Our Ancestors

Well, of course we don't know our ancestors. That's why we are doing genealogy - at least most of us. But I am getting at something else here.

I received multiple inquiries every week which begin something like

Often these inquiries will have the inquirer's grandparents' or even great-grandparents' surnames and geography, but they are generally not names I know from my own families.So I do the due diligence and look at the inquirer's matches with my 120+ family kits and respond as best I can. I limit my remarks to segments of greater than 10 cM - there are usually very few over 20 cM - with multiple matches.

Sometimes I can get a sense of direction. A matching segment may appear to come from the same pool as my maternal grandmother's Rosenblooms who lived in Borisov or from my father's maternal grandmother's Bauer and Stern family from Hungary or my faher's paternal grandmother's Kwoczkas from the Tarnopol area or some other fairly well defined part of my family. Occasionally, as in the case of Cousin Debbie, we can determine that our Trencin County third-great-grandmothers are probably sisters, but we have no surnames or parents' names to work with, so cannot make the absolute connection.

Sometimes I will see something that appears to be on the other side of some of my cousins. In one such case, I was able to connect my second cousins Beverly and Sam on their mother's side with their third cousin Melissa. The common ancestors are their Berger great-great-grandparents whose names both sides knew. But that only worked because both sides knew the relevant surnames and given names.

Debbie's case is an example of another phenomenon - being related in multiple ways, the result of endogamy. 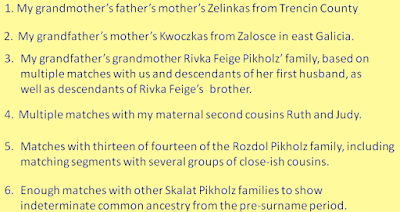 But it is rare when my responses blame endogamy for our inability to define a match. Usually it's just an inability to recognize our own ancestors. On my mother's maternal side, the only surname I know is Rosenbloom. Of my grandmother's eight great-grandparents, I know one surname. Of her sixteen great-great-grandparents, I know one surname. And that does not even consider the validity of the names we know. My great-grandfather is Israel David Rosenbloom, my namesake. But was his father's father Rosenblolom? Who knows! And we know nothing of his wife's family.

My mother's father once told my mother that their name was "always" Gordon, not changed from something else. But aside from my great-grandmother's birth name - Kugel - we have no other surnames. So you can match my mother's family all you want, but the probablility that we can recognize a match is very low.

My father's side is a little better. On my grandmother's father's Trencin County Slovakia side, we have the surnames Rosenzweig and Zelinka in the area since the mid-late 1700s. And one of the mothers may have been a Politzer.

My grandmother's mother's side has more names - four for certain, perhaps five - but none of my Bauer/Stern matches knows any of those names. Or the accompanying geography.

On my father's father's side, my great-grandfather had two Pikholz parents and we have nothing further back besides the estimation that Pikholz was once Spira. And my great-grandmother Kwoczka, whose mother is a Pollak.

None of this is an endogamy problem. It's all about not knowing our own ancestors names beyond the last few generations and not knowing how far back those surnames are valid. And of course, those who make inquiry about DNA matches usually ndon't know their families any better than I know mine.

This kind of large match that my family has with Tara's mother has nothing to do with endogamy, even if we are related multiple ways. It's all about our inability to recognize our ancestors.

Dr. Jeffrey Paull - best known in the genealogy community for his work on the Y-DNA of certain rabbinic families - wrote elegantly about this a few days ago in reply to someone on JewishGen's DNA Testing discussion list. (Emphasis mine.)


The reason that this situation occurs so often among Ashkenazi Jews is
not necessarily due to Jewish endogamy, although that may play a role
at very distant relationships.  There is, instead, a much simpler and
more obvious explanation ... that generally speaking, Ashkenazi Jews
have very limited knowledge of who their ancestors were.
Let's go back to your statement: "However, when I was in touch with
that match we shared all the family names we could think of and none of
them were the same."  The key phrase in that statement is: "all the
family names we could think of."
Let's take the example of you having a genetic match at either the 3rd
or 4th cousin level.  At the 3rd cousin level, you share one pair of
great-great-grandparents out of a total of eight pairs.   At the 4th
cousin level, you share one pair of 3rd-great-grandparents out of a
total of sixteen pairs.  Do you know all 16 of your great-great-
grandparents, and all 32 of your 3rd-great-grandparents, including
their maiden names?  Very few Ashkenazi Jews do.
What typically ends up happening is that Jewish genetic matches compare
notes, just as you did.  They rattle off a list of surnames that they
are familiar with, which represents only a partial subset of the total
number of lineages that they are descended from.  Their genetic match
does the same thing for the partial subset of lineages that they know
about.  More often than not, these two partial subsets do not overlap.
If all Ashkenazi Jews had family trees that extended back at least five
generations to their 3rd-great-grandparents, there is no doubt that they
would be able to identify a large percentage of their 2nd, 3rd, and 4th
cousin genetic matches through autosomal DNA testing, the same way that
many non-Jews are able to do.  Jewish endogamy plays very little role at
these relationship levels, as demonstrated by autosomal DNA studies.

He referred readers to this article. In this context he calls endogamy "a convenient scapegoat." Harsh, perhaps, but not inaccurate.


An additional complicating factor that enters into the equation for
Ashkenazi Jews, involves their surnames themselves.  Most Ashkenazi
Jews acquired their surnames in the early part of the 19th century in
the Russian Empire, where, for reasons related to the Jewish surname
laws, many related people acquired different surnames, while other
non-related people acquired the same surname.

And I add not only that but when surnames came into play, they were not always the same within a family. Three brothers may have taken three totally different surnames. And of course we have the phenomenon of children receiving the mother's name because the Jewish marriage was not regeistered with the civil authorities.


Adding to this complication is the fact that many Ashkenazi Jews changed their
surnames upon immigrating to America.  This surname instability is a
complicating factor that most non-Jews do not have to contend with,
and again, it has nothing to do with Jewish endogamy.

And I add that name changes, truncations and spelling varieties did not only occur due to emigration to America. It happened within Europe as well. And Mandatory Palestine and elsewhere.

Housekeeping notes
Blaine Bettinger has announced the creation of DNA Central. Please have a look. I have already joined. 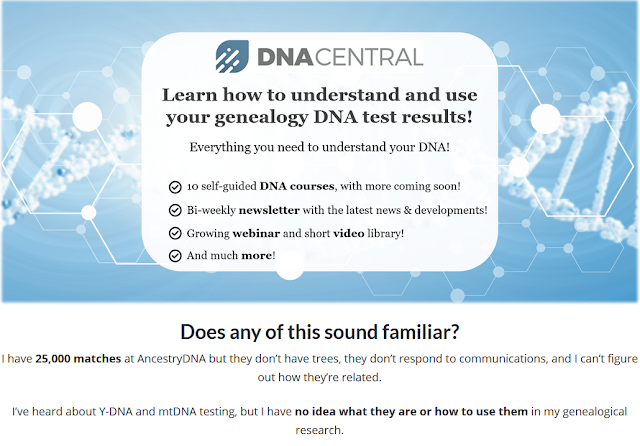 Family Tree DNA has announced a sale during August for both new and upgraded tests. 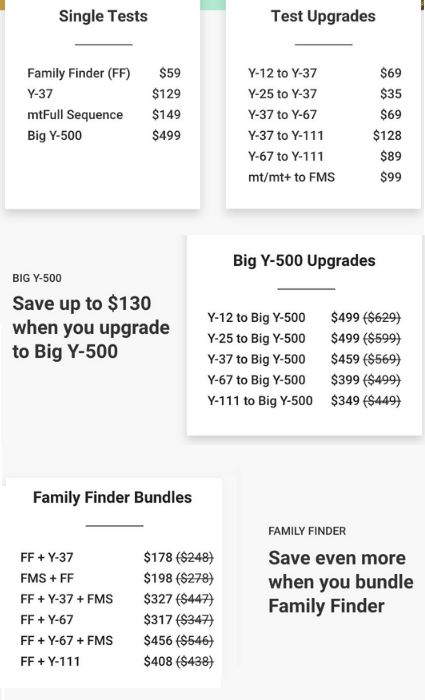 Posted by IsraelP at 2:21 PM No comments: