Debbie
In the course of putting together my summer travel schedule, I did some emailing with Deborah Long, the founder of the Triangle Jewish Genealogical Society in North Carolina. I shall be speaking for them on Sunday 31 July in Durham. (Program directors please note: The Thursday before and the Monday after are still available.)

Debbie did a MtDNA test more than six years ago, but only recently did the autosomal (Family Finder) and her match list came in at the end of April. She sent me a note with all the enthusiasm of the new DNA researcher (including the required exclamation points) showing me that we are second-fourth cousins. She gave me access to her data at FTDNA and I saw that in addition to me, Debbie is a suggested second-fourth cousin to three of my four sisters, my father's sister (Aunt Betty) and my double second cousin Lee. But her best match with my family - and her third best match overall - is Lee's brother Marshal, who is a suggested second-third cousin.

I fiddled a bit within the limited reach of the FTDNA chromosome browser, then helped her upload to GEDmatch where I could do this properly. The matches on GEDmatch are different. Two of her three best matches with my family are Pinchas and Bruce, descendants of the brothers of my great-grandmother Jutte Leah Kwoczka. They are 3.6-3.7 generations away on GEDmatch but only suggested third-fifth cousins on FTDNA. Other matches of under four generations on GEDmatch are Marshal and Lee, Aunt Betty, two of my sisters and my second cousin Susan on my grandMOTHER's side. (Susan is also a second cousin to Marshal and Lee.) FTDNA has Debbie and Susan as suggested fifth-remote cousins.

Debbie and the Kwoczkas
I decided to do several chromosome browsers on GEDmatch, with different combinations of my family and Debbie. First I did the Kwoczkas. I used Pinchas, Bruce and Pinchas' nephew Ben, plus the thirteen (of fourteen) descendants of Jutte Leah that Debbie matches. The results were weak, but there are two of some note. On all the following charts, note that the start and end points are often identical from match to match.

Chromosome 4 has a nice grouping of Pinchas, Ben and Bruce, but without any of Jutte Leah's descendants. The segment is small - not quite 6 cM. Nothing to get excited about, but worth noting, perhaps for future reference. Perhaps, for instance with better results for one of Debbie's relatives.

Chromosome 9 has a match of just over 10 cM with Bruce and matches just under 10 cM with (Aunt Betty's son) Ed, my father's brother Uncle Bob, followed by Aunt Betty, my second cousins Rhoda, Marshal and Lee. Nothing remarkable here, but it does appear that Debbie and the Kwoczkas have a common ancestor.

Debbie's ancestrral surnames and geography:
do not point to anything meaningful vis-a vis the Kwoczkas.

Debbie and Nana
Since there was nothing obvious between Debbie and my Pikholz side, I had a look at my grandmother's side, which also includes Marshal and Lee whose mother is a double first cousin of my father. Nana is Bauer and Stern on her mother's side and Rosenzweig and Zelinka on her father's side.

I do not see my 5C1R on the Rosenzweig side among Debbie's matches and although my fifth cousin Cyndi on the Zelinka side is a fifth-remote with Debbie on FTDNA, I do not see a match between them on GEDmatch.

This time the chromosome browser was much more helpful.

Chromosome 2 has a segment with significant matches between Debbie and everyone in the group except Susan, Shabtai and my sister Amy. (Well, Ed's isn't exactly significant, but it's there.) Most are in the 19.5-20.5 cM range and aside from Ed, they all have the same starting point. The significant match is Fred. His match tells us that this segment comes from Nana's father, either the Rosenzweigs or the Zelinkas. Both those families are from Trencin County Slovakia, back into the 1700s.

But we can get more specific, using the matches on the X chromosome.

Here we see Aunt Betty, Uncle Bob and all four of my sisters, with some of those segments identical. This cannot come from my father's father because the X cannot go from father to son. It could come from Nana's mother's side, but nothing hints at that as a source. That leaves Nana's father's side, as on chromosome 2 above, and it cannot be from his Rosenzweig father. It must be, therefore, from my great-great-grandmother, who is a Zelinka. And the line from her to the common ancestor with Debbie cannot have a father-son on either Debbie's side or ours. Since both our side and Debbie's almost certainly have another woman or two on the way to the common ancestor, I do not expect that person to be either a Zelinka or one of Debbie's Munks.

Geography
In citing her ancestral surnames, Debbie mentions Munk from Slovakia. She specifically mentioned the town of Baán in Trencin County..According to the JewishGen Communities database, Baán is the Hungarian name for what is now known as Bánovce nad Bebravou, located at 48°43' N 18°16' . This is Zelinka-Rosenzweig territory, though we do not have anyone in that particular town, so far as we know. But now with Debbie, it seems we do.

Debbie has no matches to speak of involving Hersch's two full sisters. There are, however, matches involving Lillian and Erika - a granddaughter and a great-granddaughter of Hersch's half sister Breine Riss.

First of all, Debbie has three segments of 5-6 cM - on chromosomes 1, 3 and 16 - where she matches both Lillian and Erika. So we see a common ancestor between Debbie and Rivka Feige (or perhaps her first husband).

Second, Debbie has matching segments with Lillian and my second cousin Rhoda on chromosome 7. These segments of are also in the 5.5-6 cM range. If these are legitimate segments, they too point to Rivka Feige.

On chromosome 11 (above), Debbie has matching segments of about 7.3 cM with Erika, Uncle Bob, one of my sisters and me. This too, points to a common ancestor for Debbie and Rivka Feige, though once again, the segments are small.

Finally, as an afterthought, I did the same chromosome browser again, adding three kits of descendants of Rivka Feige's two brothers who are not known to have additional Pikholz ancestry. That showed Debbie with one more matching segment in the 8.7-10.3 cM range. This is a segment on chromosome 19 and it includes Jane, three of my sisters and me.

Let us keep in mind that with all the matches of this sort, we cannot see how exactly they match Debbie without getting tests from some of her first and second cousins.

Due Diligence
I ran a chromosome browser on my mother's side - two first cousins and two second cousins on each side. There was nothing significant there with us, but Debbie has two small matches with my two second cousins (first cousins to each other) on my grandfather's side. On chromosome 15, the two matches are nearly 10 cM and have the same starting point. On chromosome 16, the two matches are identical - 5.62 cM. If these are real segments, they are probably on the Jaffe side of those cousins' grandfather. But likely a very long time ago.

Debbie matches thirteen of the fourteen Rozdol Pikholz descendants according to GEDmatch, with three at 4.0 generations or closer. (FTDNA shows only seven matches, with one as close as suggested third-fifth cousin.) Nothing particularly significant there, though there is a <10 cM match with two second cousins on chromosome 9 and another with two 1C1R of chromosome 16. The relevant surnames here aside from perhaps Pikholz, are Blum and Mensch.

Finally, I checked Debbie's matches with the rest of the Pikholz families, descendants of Nachman (b.1795), Peretz (b.1820), Mordecai (b.1805) and a few others whose lineage is unknown. Chromosome 1 has a match of about 8 cM with Irene and Gili, great-granddaughters of Peretz. Chromosome 13 has small overlapping matches with Jacob, Maciej and Maxine, descendants of Nachman.

Debbie also has two sets of matches on the X chromosome - one with Thelma and Daphne who are not know to be related, the other with Ron and Charlie, also not known to be related. These - and the Nachman/Peretz matches - are no doubt indicative of common ancestry, but probably no more than vestigal, from quite long ago. 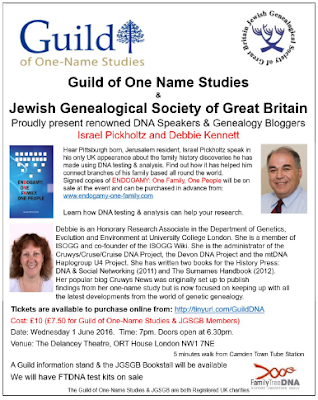 My London program with Debbie Kennett is barely three weeks away. It is under the joint sponsorship of the Guild of One-Name Studies and the JGS of Great Britain. Order tickets at http://tinyURL.com/GuildDNA.

London will be followed immediate by the Ontario Genealogical Society Conference in Toronto, where I will be giving several presentations.

Those who want to order "ENDOGAMY: One Family, One People" for pick-up in London or Toronto, signed and with no shipping charge, may do so here until 30 May.

You can also order for pick-up at the IAJGS Conference in Seattle, where I'll be giving three presentations. Deadline for Seattle order is 10 July.
Posted by IsraelP at 7:21 AM