I attended Hillel Academy of Pittsburgh for grades seven through ten. Those years were significant and they made an important contribution to who I am today.

The week before last, the school sponsored an evening reunion for alumni in Israel. (Their definition of "alumni" is, shall we say, liberal - not limited to graduates of eighth or twelfth grades.) The reunion was in Modiin, about a forty-five minute drive, and I actually attended, together with my cousin Bobbi and her sister Tamar.

There were probably sixty people or so there, including some spouses of alumni. I counted six who are older than I and a few others who are old enough that I knew them back then. I think I am the only person from my eighth grade class here in Israel, though I know of one who left after sixth grade. Quite a few alumni from my age cohort were no-shows. I wore my bright yellow "DNA My Kind of Acid" shirt, which attracted a bit of attention.

I also met Gary Coleman, who was seated at the next table. I have known his name for years but I don't think we ever met. I knew that he was in kindergarten with my sister Amy, but he didn't remember that. He mentioned that he is a cousin of Yaacov Temes, who is related to my cousins Rhoda, Roz and Marty, grandchildren of my grandfather's sister Aunt Becky and her husband Harry Katz. It turns out that Gary's mother is an Elinoff and I know her mother Chaje/Clara Katz to be Uncle Harry's sister.

So why does this matter? I mean it's the family of my grandfather's sister's husband. Not part of my gene pool. And I don't have any particular interest is other similarly tangential families. What's special here?

Well, there are two things. First of all, Uncle Harry, Gary's grandmother Chaje and Yaacov's grandmother Feige Malka are three of the ten children of Mordecai Katz and Beile (maybe Beile Nesia) Zwiebel. Beile's sister Jutte (maybe Jutte Leah) Zwiebel was married to Pinchas Kwoczka the brother of my great-grandmother. Their great-grandsons Pinchas and Aaron are my third cousins. They are third cousins of Rhoda, Roz and Marty the same way I am. But Rhoda, Roz and Marty are also third cousins of Pinchas and Aaron via Beila and Jutte Zwiebel's parents Shimon Leib Zwiebel and Ester Chava Lewinter.


I have referred to this double relationship in my Lazarus presentation.

All these families - Kwoczka, Zwiebel, Lewinter, Katz and Pikholz - were from the Tarnopol area of east Galicia and undoubtedly have additional relationships further back, that we don't know about. 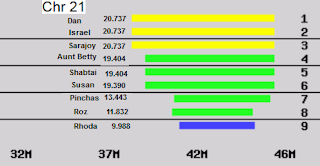 But it gets better. As I wrote nearly seven months ago, Rhoda, Roz and Pinchas share a segment of chromosome 21 with the descendants of my great-great-grandparents Shemaya Bauer and Feige Stern who - like several generations of their ancestors - lived in Hungary. So somewhere back in genealogy time, some Bauer or Stern ancestor of mine is also an ancestor of an unidentified Zwiebel or Lewinter. Back in time but recent enough that a segment of at least 13 cM has been preserved from each side.

I have found a number of strangers who share that segment of chromosome 21, but thus far none of them has had any useful information to contribute.

I found it interesting that Gary did not know of his Fleischman cousins and the others descended from Sarah Chana Kwoczka but he does know the family of Aaron, whose grandmother is Sarah Chana's sister.

Neither Gary nor Yaacov has done DNA testing (yet!) and we have no known cousins who are unambiguously Lewinters or Zwiebels on one hand or Bauers or Sterns on the other, so we have no clue where we might find the common ancestor. Yet!

I made a kiddush in shul this past week to mark my mother's seventh yahrzeit and while I was at it, my granddaughter's engagement.
Posted by IsraelP at 10:36 PM No comments:

The Way of the Land of the Pelishtim

The opening verse of this past week's Torah reading has an interesting genealogy angle.

And it happened, when Pharaoh had let the people go
that Gd led them not through the way of the land of the Pelishtim (=Philistines), which was near;
For Gd said "Lest the people reconsider when they see war and [decide to] return to Egypt"

The word "karov" is generally translated as "near" and this is the simple interpretation of this verse.

But "karov" also means "relative" (in the genealogy sense, not the Einstein sense).

Note - this is not the place to discuss the fact that Pelishtim or Philistines means "invaders."

BREAKING NEWS - We have a new Y-67 match at a genetic distance of one. Someone who is outside the known Pikholz-Spira group. I have written and look forward to hearing from him. We have no one else that close who is not a Spira or a Pikholz..

I made a kiddush in shul this past week to mark my mother's seventh yahrzeit and while I was at it, my granddaughter's engagement.
Posted by IsraelP at 5:02 AM No comments:

Tara, Her Paternal Grandmother, My Cousin Kay and Others

This is the second of at least three posts regarding my families' matches with a young woman named Tara in Toronto. I discussed her matches earlier and now we have results from both her mother and her paternal grandmother. I will discuss her mother's matches in a few days, but there is something else I wish to address first. (My mother used to say that "a few days" means less than a week. No promises.)

Chromosome 8
Using the GEDmatch basic one-to-many tool, on chromosome 8, Tara matches my brother and my sisters Amy and Jean on identical segments of about 12.6 cM, the range being 96,812,006 - 107,594,161.  My sister Sarajoy is on the same segment with 9.8 cM that ends in the same place as the other three, but starts a bit later.

The triangulation is a bit odd as everyone matches on the appropriate segments except Dan and Sarajoy. It is not clear to me how that happens, but that is not what I am getting at.

I then ran the Matching Segments Tool for Tara and found a surprise. My first cousin Kay (our mothers are sisters) is on the same segment almost exactly matching Dan, Jean and Amy. But she hadn't been on the regular one-to-many. And the fancy Tier1 one-to-many has the same result as the old reliable.

The Matching Segments result for Tara is here on the right.

Kay triangulates with my brother and all three sisters on that segment of chromosome 8.


Kay should show up as a match to Tara on the one-to-manys and she doesn't. Something odd is happening at GEDmatch. Perhaps it is because this is the only segment on the twenty-two chromosomes where Tara and Kay match, though I don't know why that should matter..

So now Tara has the results for her paternal grandmother, whom we shall call Ida. Ida matches my brother, my three sisters and Kay on the basic one-to-many slightly more than does Tara. (Perhaps the fact that Ida has two segments with Kay comes into play here.) But Ida does not match Kay on the Tier1 one-to-many. On the other hand, Kay shows up in Ida's Matching Segment results but Sarajoy does not.

There is a lot of inconsistency here and it all seems to lie at the door of GEDmatch. If nothing else, it appears that we must check both one-to-many tools as well as the Matching Segments every time we look at someone new.

But we do know that we have at least one common ancestor with Tara on my mother's side of the family. Unfortunately since none of my second cousins match Tara on this segemnt of chromosome 8, we cannot break it down any further.

Chromosome 23
Another GEDmatch mystery involving Tara and Ida is on chromosome 23, the X.

Tara has  a segment of about 10.5 cM with my sisters Sarajoy and Jean, together with my second cousin Ruth on my mother's father's Gordon/Kugel side.

Ida has Sarajoy and Jean on that same segment using the regular one-to-many - and Kay as well - but not Ruth. The four of them all triangulate so they should all match both Tara and Ida. On the Tier1 one-to-many, neither Kay no Ruth appears. On the Matching Segments tool, Ida matches Jean and Kay, but not Sarajoy.

There will be more about Tara's matches "in a few days."
Posted by IsraelP at 10:52 PM No comments:

As I prepare to read Parashat Shemot (Exodus, Chapters 1-5) in shul this week, the following passage brings back a memory.

And it was in those days, that Moshe grew up and went out to his brethren and saw their burdens. And he saw an Egyptian striking a Hebrew man from among his brethren.

I was four years old and attended nursery school in the old Hebrew Institute building, currently the site of Maxon Towers. The teacher was Mrs. Gertrude Nachman who worked at the Institute for decades, mostly as an arts & crafts teacher. She told us the story of Moshe in Egypt. According to her version, young Moshe received a horse for his birthday and went out riding, which led to the above verse.

"Why do you remember this?" you ask.

Well, we play-acted the story.

I was the horse.

Play-acting as an educational tool works. Especially for the child who gets to be the horse.

During the subsequent fifty-odd years, I have looked for traditional sources that mention Moshe's having a horse and have found nothing. I think Mrs. Nachman made it up.

Bonnie Morris says that is Cena Glatstein, not Miss Tanner and Hy Kimmel, not Joseph Bayer.

I think the "unknown" in the back row is Rabbi Shaul Rowner. Chuck Fax agrees.

Mrs. Kreiger was my first Hebrew School teacher (when I began going four days a week), Mrs. Milch my second and Mrs. Goldberg my third.

Mr Kantarof spoke at my father's unveiling and I spoke at Mr Kantarof's funeral.

The portrait on the wall is Israel Aaron.


Housekeeping notes
On 8 January, I shall be giving two presentations for the genealogy course run by Yad Vashem and the Central Zionist Archives, "From Roots to Trees." Both in Hebrew.


5:30-6:15 – The Importance to Genealogy of Understanding Jewish Culture and Customs
6:16-7:00 – Using Genetics for Genealogy Research

Posted by IsraelP at 7:11 PM No comments: