It's That Time of Year Again. The Skalat Memorial Service.

Sunday at five-thirty, the Skalaters in Israel gathered at the memorial in the cemetery in Holon, just south of Tel-Aviv, to remember our community and its members, seventy-seven years after the destruction of the ghetto. No "all the Skalaters," of course, especially this year when some are still considered "high risk" for the virus. Yocheved Sarid is one of those who was not able to be there, but her four children were. 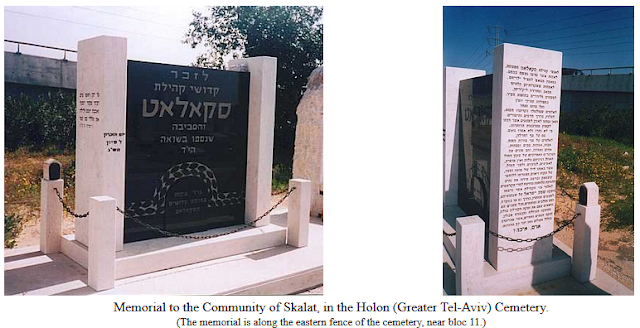 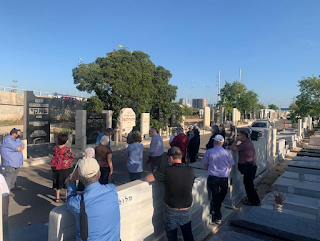 There were nearly thirty people in attendance - fifteen men and nearly that many women. Three women who actually lived in Skalat. Everyone wore masks.

There were copies for the taking of the Hebrew version of Avraham Weisbrod's Yiddish yizkor book. This edition includes about sixty pages of personal testimonies, organized by Lusia Milch. Zvika Sarid, who has run the memorial service for quite a few years now, read one of those testimonies, by Phyllis Nissenbaum Linnel, (p. 153).

Zipi Tal - the daughter of Chaim Dlugacz and Cyla Pikholz  - read some prepared remarks based on her own experience as a second-generation survivor. Her parents came to Israel in 1939 and her mother's two surviving sisters came some years after the war ended.

Tova "Giza" Zehava, who survived the Holocaust in Skalat as a child, spoke from the heart about her own experiences, with an emphasis on her mother's sister Betka Marder and her infant son. Betka's husband was Moshe "Munio" Pickholz, whom I believe to be a third cousin of my father. 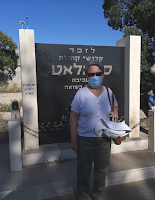 Chaim Sarid reviewed the situation of the two memorials in Skalat - one in the corner of the soccer field which had been the Jewish cemetery and one in nearby Novosilka. He reported on the need for repairs and the associated finances. He had sent some photos in advance of the service and asked for $100 contributions. 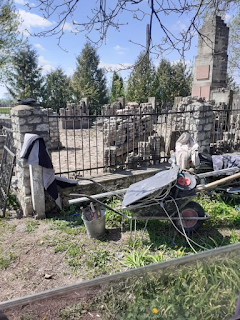 Zvika asked me to read Psalm 130 and say Kaddish.