The funeral for my brother Daniel - Zvi Moshe - will be held Monday at two o'clock at Shalom Memorial Park, Arlington Heights Illinois. Additional details to follow.


Amy and Sarajoy will sit shiva at Amy's in Buffalo Grove Illinois. They will be receiving visitors 10 AM - 5 PM and 7 PM - 10 PM, Friday morning and 6-10 Sarurday night..

I will sit at home in Jerusalem, beginning directly after the funeral, which will be late Monday evening here. Services will probably be at 6:40 AM and maariv at 7:30 PM. I do not know if we will have enough for a minyan for minha. The address is Avraham Arest 6/4, on Patt by the entrance to Bet Zefafa. Check back here for updates or talk to me by phone or email. 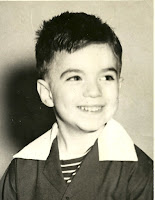 Judith and Jean will sit at Judith's in Elkana, though Jean will go home to Arad Friday.

All of us plan to have email open during shiva. We` get up Monday morning, but Amy and Sarajoy should get up Sunday morning.

Dan's increasingly serious condition is why I was in Chicago last week.

I do not expect that there will be any changes in my travel plans. 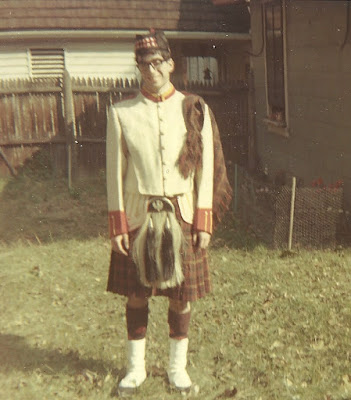 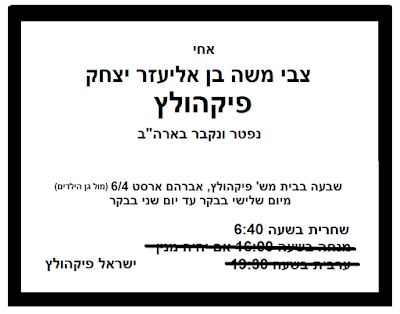 I am in the midst of a very brief personal trip to the US. Some notes.

** The flight from Israel had a stopover in a major European airport where, despite regular security, they do additional interviews at the gate. So I'm waiting in line for my security intervew and the gate agent on my right says to the couple she was talking to "Can you spell that for me?"

And the woman spells out their name "K-L-x-x-x."

And I say "You're from Podkamen." and she says "How did you know that."

So I say "All the KLxxxs are from Podkamen." And she says "Yes, but how did you know that."

And I say "I'm a genealogist. And besides, some of my family lived in Zalosce - the next town over." Now the husband gets involved and he says "Some of our family also lived in Zalosce."

So feeling I was on a winning streak, I say to the man "Your name is probably Pinchas." And he says "Yes it is, but how did you know?" And I say "All the KLxxxs are named Pinchas."


** I have mentioned my four sisters often in the context of our DNA tests. I also have a brother, whom I saw last week. I am pleased to report that two vials with his DNA are on their way to Houston.

I would not be surprised to find that he has segments that the rest of us don't, but I will be truly surprised if something significant shows up. Of course, we cannot know what may come of any specific DNA test until we have the results in hand.


** The call for papers for the 37th IAJGS Conference on Jewish Genealogy came out a few days ago. The Conference is planned for 23-28 July in Orlando Florida. I will probably submit proposals for the three presentations I made last year,plus the new "Uncle Selig" that I described here a few weeks ago.


** Anyone who is interested in a program in mid-July, especially in southern United States, please let me know. For that matter,we can also talk about late April early May 2018 when I expect to be in the US for my grandson's bar mitzvah.


** And there are still some speaking dates available in the US at the end of January. Let me know if you are interested. 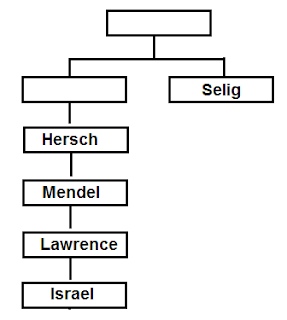