The Nurse Was Killed By A Shell Thirteen Days After Independence

We had to do a couple of things in Jerusalem yesterday, so we stopped by two family graves.

The Mount of Olives

My cousin Bruce in Beer Sheva has wanted to visit his uncle's grave since he arrived here from New Jersey a few years ago. Bruce's grandfather was the younger brother of my great-grandmother, so he is my father's second cousin, though he is a bit younger than I. Avraham Kwoczka is the only first cousin of any of my grandparents buried here in Israel and I visited his grave some years ago.

We met Bruce and his wife Yehudit in Jerusalem and went up together. 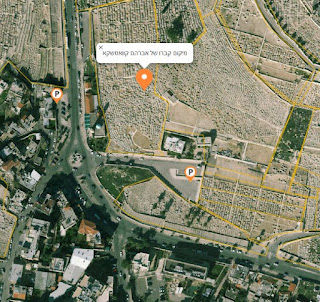 It's easy to find and only a short walk from one of the parking areas. This image is from the Mt. of Olives website. He doesn't show up at all on the popular newish Graves app.

He had no children.

Last year I wrote about my father's half second cousin Egon Riss who was a doctor in the Old City during the War of Independence seventy-four years ago, which I had only learned about the time of that blog,

His wife was a nurse at nearby Hadassah Hospital and was killed thirteen days after independence by an enemy shell. Today is her yahrzeit and it was quite unintentional that I visited her grave yesterday.

Here is my translation of her entry in the IDF memorial site.

Hava Zhezmer Riss, the daughter of Fruma and Yaakov, was born on the twentieth of Tammuz 5679 (18 July 1919) in Tel-Aviv. She studied at the "Talpiyot" school and the "Balfour" high school in Tel-Aviv. Afterwards she was accepted to "Hadassah" Nursing School in Jerusalem and was accredited as a nurse and a midwife. She worked at Hadassah Hospital on Mt. Scopus and with great love attended to the sick and the new mothers, particularly from the poorer neighborhoods of Jerusalem, taking great pride in her work. All her patients would forever remember her kindness and patience. She was a modest woman, a characteristic she inherited from her parents, at home, at school , at work and as a member of the Haganah resistance movement. After she married, she continued to work and to support her husband's medical studies. Twice they miraculously avoided injury on their way to work during the siege of Jerusalem - she in the hospital and he as doctor of the Old City itself.

Posted by IsraelP at 9:21 AM No comments:

The "New" Cousin and The lesson Learned Yet Again

Most of those who did DNA testing for my family project did so with Family Tree DNA. I have also tested with Ancestry and 23 & Me and have my kit on MyHeritage. Last week, I found a match on Ancestry with 183 cM of shared DNA over ten segments.

This size match - if it is all from one ancestor - is on the edge of second cousin territory. But of course, we could be more distantly related, in multiple ways.

I wrote to the match (his name is Chris) and it turns out his father in unknown. He uploaded to GEDmatch, where I could see how he lines up with the rest of my families and perhaps get a handle on who might be his father.

Our one-to-one match looked good, but it still didn't tell me if this is all from one ancestor, or more properly, one ancestral couple. 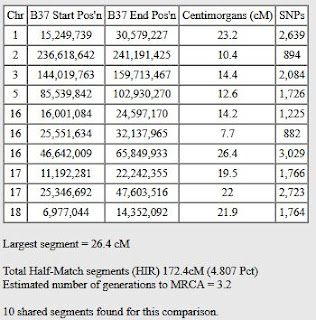 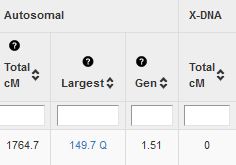 Once I could see his results on GEDmatch, it became crystal clear. He matches one of my father's paternal first cousins with 1764 cM, with a longest segment of nearly 150 cM. A grandson of this cousin and with no X, he belongs to one of his sons.

This first cousin of my father is deceased as are his two sons. One of those has two sons and the other was never married and had no children.

I made some introductions and they are now talking to each other. I have also given Chris some of the general Pikholz-Kwoczka family background. It remains to be seen if one of my second cousin's sons will test and confirm that Chris is their half brother, or if they will leave it to be determined.

I have three or four Non-Paternal Events in my family genealogy, but never anything quite like this. For some genealogists, this kind of discovery is fairly routine, but not with us.

But I am writing this for another reason. A drum I have beaten here multiple times over the years.

Two of my first cousins match Chris with 145 cM and 81 cM. All eight of us are related to Chris in exactly the same way, through our grandfather. If my match had been 81 cM, rather than 179 cM, I would have been less interested.

There is a lot of randomness in DNA matches. Cousins match differently The more cousins you test, the better your chances of finding good matches.