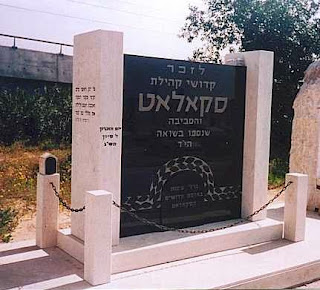 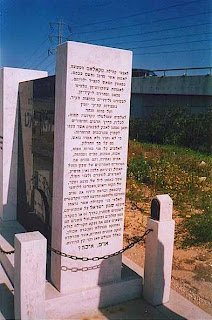 To the suffering people of the Skalat community
to the fathers who took their lives in their hands,
in desparate attempt to save their children,
to the mothers who hair blanched
from pain and fear for their dear ones,
for those tortured and shot in the town streets,
in the ancient citadels
and on the banks of the river,
to the thousands taken in the death cars,
to Belzec, on the road of blood and suffering
and were ground to dust., to the few who dared
to jump from the speeding trains,
because they never quit or gave up hope,
even at the edge of destruction,
for the thousands at the pts of death,
fathers, mothers, grandfathers and grandmothers
brothers and sisters, counting the
last grains of sand in the hourglass,
their eyes desparate and no one comes to rescue,
to the brave, the daring, the fortunate,
who in that night of storm and unrest,
of hope and desparation, joined the fighters of
Kobpak and whose blood filled the path
of the Resistance in the Carpathian Mountains,
to the thousands of the community who were killed
with the cry of SHEMA YISRAEL on their lips,
to the few who remained, by miracle or by chance,
fewer every year, and during these many years
they carry the cries of the entire community,
and the greatest and heaviest cry of them all,
the cry of the dead and of the living, echoing
throughout the world, from then until the end of time:
MANKIND,  WHERE WERE YOU?
Posted by IsraelP at 4:48 PM No comments:

Add to that mix the fact that Family Tree DNA's cut-off for acknowledging a match at all is nontrivial. You can have a small match but they don't count it. (I think their cut-off is 20 cM.)

Over the last couple of years, I have gotten used to Family Finder results that make some kind of sense and I have succeeded not badly at coming to conclusions that I did not think likely going in. This despite the vagaries of genetic inheritance that can show two fourth cousins who do not match at all, while their siblings match wonderfully and convincingly.

Another way of saying that is that I have gotten spoiled. That is why the newest compilation of Family Finder results feels so weird, though it really is not. For the most part.

Below is a table showing relationships among seven family members, identified by initials.

Here is the level of certainty of the relationships.
The new results are for S and M.

D, the weakest of our assumptions, shows his first four suggested relationships as correct. F looks good, at least on the first three. G and R are great with each other and with J.

S's matches are generally is not as good as I'd like, though the matches with G, R and particularly D are important.

But the three fully documented relationships among J, M and S (marked in yellow) do not show up on FTDNA at all. This will undoubtedly raise credibility issues for the whole study, among some of the participants.

According to GEDmatch, the match between M and S is indeed very small, just 12.6 cM altogether with none of the three segments larger than 5 cM.

But the matches that J has with M and S on GEDmatch are not so simple.

Both are over 50 cM, so should certainly show up as matches on FTDNA. I asked the folks there to have a look at this and will add their findings at the end of this post when they become available.
The GEDmatch results are pretty much in line with the results predicted by ISOGG.
Posted by IsraelP at 11:33 AM No comments: