The Annual Skalat Memorial - Back On Track

The annual memorial meeting in memory of the Jews of Skalat was held Monday, the seventh of Sivan, seventy-nine years after the murder of the last Jews in town. Because of the pandemic regime, we missed last year and most of us truly missed it. 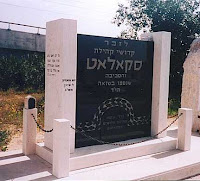 We met, as usual, at the monument along the eastern fence of the Holon Cemetery. There were close to thirty of us, mostly second and third generation survivors. There were two women who actually had lived through the war in and around Skalat. Last time there were three but we lost Yocheved Sarid last month. All four of Yocheved's children were there and her son Zvika ran the service as he has done for the last dozen years.

The first person I spoke to was Tova "Giza" Zehavi, one of the two survivors. She gave me a small book she had recently published about her three years as a refugee between Skalat and Israel. 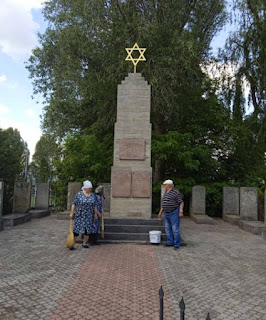 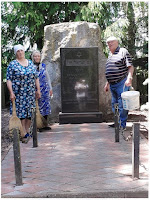 Over twenty years ago, we (I was not yet part of the group) sponsored two memorials in Skalat itself, one at the edge of the old cemetery (now a soccer field) and one outside town where much of the killing occurred. There is an older man in Skalat who looks after them and he had asked for more money, so that took a few minutes of our time.

Zvika spoke about his mother then asked the other survivor, Bronia, to speak about her personal experience.

David Braunstein spoke about his father Chaim, who had been the driving force behind the annual meetings, the memorials and the two trips that some of the group had taken. He also wrote the Hebrew-language memorial book about Skalat.

Zvika led us in Psalm 130 and kaddish and said a memorial prayer.

He asked me to prepare something to say about my family research for next year.

Posted by IsraelP at 7:08 PM No comments: