Nava - A New Match on Chromosome 21, With A Twist

I have written in this space about my great-grandmother's chromosome 21 on several occasions, most recently barely two months ago, based on an article I wrote for the JGSGB publication Shemot.. The quick background is that two of Regina Bauer's grandchildren and three great-grandchildren match her brother's grandson on a segment of 23 cM on chromosome 21. Her known ancestral names are Bauer, Lowinger, Stern, Grunwald and Hercz from Hungarian towns south of Budapest.

Smaller matches on that same segment are three of my cousins on a different side, which are almost certainly from an ancestor they share with one another, but not with the rest of my family. Their ancestry there would be Zwiebel and Lewinter from the Tarnopol area of east Galicia.

As I wrote two weeks ago:

My recent piece discusses the fact that I have about three dozen other people who match on that segment, the largest being Robbie whose match with Shabtai is 19 cM. Those who have responded to my inquiries have little to add to my research, though one has Bauers with different geography.

So what brings me back to this segment? A week or so ago, I received an inquiry from a woman named Nava, here in Israel, who has a match with me on MyHeritage. This is not the Nava whom I discussed in red two weeks ago, but someone else.

This is Nava's match with our group. The six with the red blobs near the top are my Bauers and the three towards the bottom are the Zwiebel/Lewinter cousins. I have labelled Shabtai and Robbie by name. 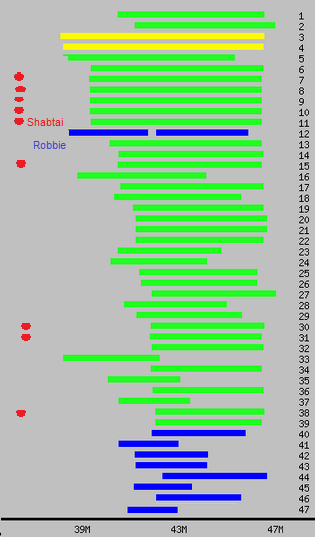 Nava's match with Shabtai is over 18 cM, nearly as large as Robbie's but a bit further to the left.

She also has matches that go further left with lines 3, 4, 5, 12 and 33. I brought that to the attention of those matches but have not heard from them. Truth be told, I do not know that I want to midwife that correspondence on my own.

But it gets better. We also have this new segment. This is a small match - just over 10 cM with Shabtai and generally barely worth mentioning. Except for one thing. 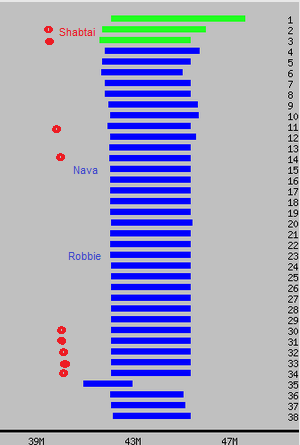 In fact, they have five small segments in common which indicate one or more ancestors common to both of them, but probably much further back than their own ancestral knowledge.

And of course, some of those segments may be false.

But there is more. Two weeks ago I wrote this:


When I first learned of DNAPainter.com nearly two years ago, I mapped out twelve segments where Shabtai matches multiple descendants of Regina with at least 18 cM. The largest of these are 61, 57, 47, 38 and 35 cM.  Using the “Segment Search” tool on GEDmatch Tier1 (this was previously known as “Matching Segments Search”), I was able to see other people who match those specific segments. Most of my larger segments of interest had few outside matches, but I wrote to the matches where I could and none of them knew anything helpful.

Nava's husband Joseph is the first of the matches on chromosome 21 who also matches another of my Bauer segments, in this case on chromosome 17. The matches are my father's sister and brother and three of my sisters. And of course Shabtai, who is the basis for this comparison.

Of course, I have no way of knowing - at least for now - if the segments on chromosomes 21 and 17 come from a single ancestor but the lead itself is interesting. I am waiting to hear from Nava and Joseph about their ancestral surnames and geography, but I am not optomistic. Nava keeps referring to Belarus/Lithuania.

The "Segment Search" tool gives quite a few matches on chromosome 17, all on the segment on the right in the figure above. (I ran it with a threshold of 13 cM, just to keep it manageable. There are another two dozen in the 10-13 cM range. And remember, "Matching Segments" is limited to the top ten thousand matches.) 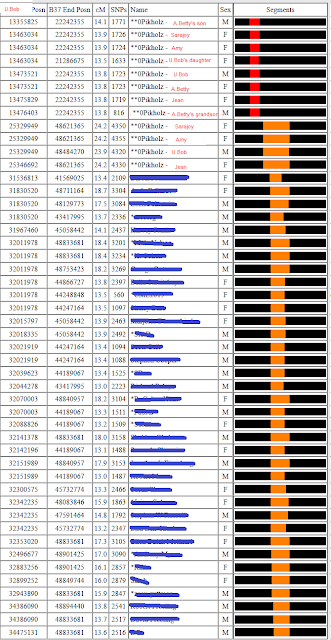 I wrote to some of these chromosome 17 matches about two years ago. Perhaps I shall revisit these.
Posted by IsraelP at 3:29 PM No comments: