Some months ago, Jessica Feinstein, the editor of the Jewish Genealogical Society of Great Britain quarterly Shemot, asked me to write a brief piece for their winter DNA issue. That publication came out recently and my article is reproduced below.

There is, however, something new which came in after Shemot was already closed. I have added that here in red.

Background  - The Bauers and the Sterns
I manage DNA kits of over 120 people – about two-thirds of them Pikholz descendants and most of the rest known members of my other families. Those include two grandchildren and nine great-grandchildren of my father’s maternal grandmother Regina Bauer Rosenzweig and one grandson (Shabtai) of her brother. Regina Bauer was born in 1870, one of five daughters and two sons of Simon (Shemaya) Bauer (1833-1902) and Fani (Feige) Stern (1842-1911).

The Bauers were a large family in Kunszentmiklos Hungary, about an hour south of Budapest;  in the 1700s they had lived in Apostag, about half an hour further south. We have many Bauer records from both places.  Fani Stern was born in Kalocsa, another half hour further south, and her father Salomon (Selig) Stern (~1805-1862) was from nearby Paks. Fani’s mother was a Grunwald from Perkata, which is across the Danube from Kunszentmiklos.

When I first learned of DNAPainter.com nearly two years ago, I mapped out twelve segments where Shabtai matches multiple descendants of Regina with at least 18 cM. The largest of these are 61, 57, 47, 38 and 35 cM.  Using the “Segment Search” tool on GEDmatch Tier1 (this was previously known as “Matching Segments Search”), I was able to see other people who match those specific segments. Most of my larger segments of interest had few outside matches, but I wrote to the matches where I could and none of them knew anything helpful.

Robbie
While reviewing my Family Tree DNA match alerts, I found Robbie from Chattanooga Tennessee. Robbie showed matches with my father’s sister, my second cousin Susan, my brother, one of my sisters and me – and Shabtai. The match was 19-21 cM on chromosome 21 (where our segment with Shabtai is only 23 cM) and clearly showed that Robbie had a common ancestor with Regina Bauer. It is his only match with us. I asked Robbie about his ancestry, but he is adopted, so could not tell me anything.

But this is only half the story.  Here is Robbie’s full match with us on chromosome 21. 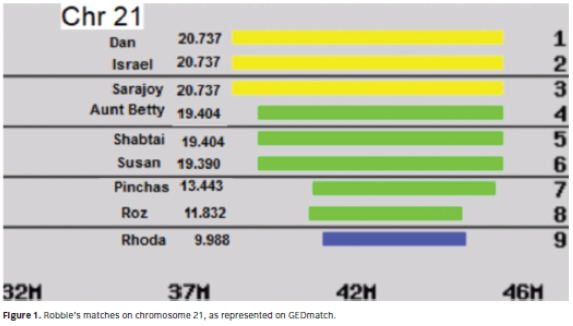 In addition to the six Bauer descendants, he matches three of my cousins on my father’s paternal side – Pinchas, Rhoda and Roz. Rhoda and Roz are my second cousins, first cousins to one another. Pinchas is our third cousin.  But it’s more complicated than that. Pinchas is a third cousin of Roz and Rhoda on a second path that has nothing to do with the Pikholz family. That second path is almost certainly what is in play here.

The great-grandmothers of Pinchas, Rhoda and Roz are the sisters Beile and Jutte Zwiebel and their mother is Ester Chava Lewinter. The Zwiebels and the Lewinters are from the Tarnopol area of east Galicia and have nothing to do with anything Hungarian, since 1800. Nonetheless, the three of them triangulate with the six Bauers – everyone matches everyone else on this segment. 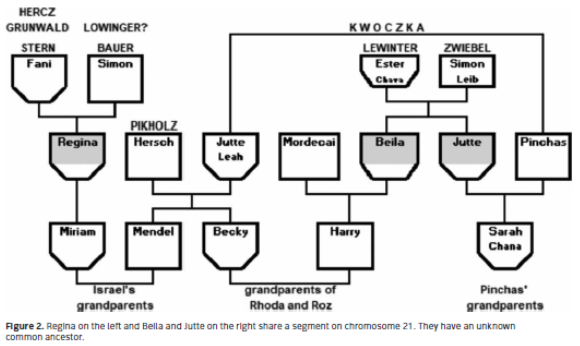 This is a classic case of Jewish endogamy, where my Hungarian family and my Galician cousins have some sort of common ancestor. Maybe on the Bauer side, maybe on the Stern side. Maybe on the Zwiebel side, maybe on the Lewinter side. Who knows! But a common ancestor there is – recent enough that the match between the groups survives yet far enough in the past that it predates the known geography of the families. The fact that Robbie has only this one segment with us sounds like it is further back than the 20 cM segment might otherwise indicate.

We have no cousins of either Regina Bauer or Beile and Jutte Zwiebel, so we cannot determine whether our segment 21 comes from their fathers’ sides or their mothers’ sides.

The Other Matches
Recently I went back to the Segment Search tool on GEDmatch Tier1 to see who else matches on that segment. There are about three dozen who match our chromosome 21 with more than 12 cM. Five of those have a match of 18.0-18.2 cM and another’s match is 16.8 cM. The rest are 12.0-15.1 cM. Robbie’s match of 19.3 cM is still the largest. A few of them are managed by people I know as researchers – or even know personally. A few are related to one another. By and large, these are kits that – like Robbie’s – don’t have significant matches with us outside of chromosome 21.

I wrote to all of them. Fifteen responded.

One – Andrew – has a Bauer grandmother. He writes:

My line of the Bauer family, and most likely yours too, originated from Moravia, and from there Northern Hungary (what is now Slovakia), particularly in Hluboka, Nyitra County. In the early 19th century, there was a great movement of Jews (and also Slovaks, or Tóts) to south-eastern Hungary, where more opportunities opened up at that time. Your Bauers were not that far there from  my Bauers, they may have visited each other, but how they were related, I don’t know; perhaps you can find out. I have looked at your Kunszentmiklos Bauer database, many names are similar to my list, but they are clearly not the same people.

Regina Bauer spoke German, in addition to Hungarian, so there may be something to this. And if it is real, it may or may not include chromosome 21.

Andrew has no Bauer candidate for a Y-DNA test, so we cannot compare his line to mine.

Another match is the daughter of a woman named Zendel and suggests a similarity to Zwiebel. I don’t think so.

Another dozen said they did not have any of the seven surnames on my side or any geography of real interest. The rest of the matches never replied.

Nava
Last week, I received a note from a woman named Nava, with whom I had corresponded earlier about chromosome 21. Nava's match to us on chromosome 21 is small, about 10 cM with Robbie and a bit smaller with my six Bauers. It does not match Pinchas, Rhoda and Roz who start a bit further to the right on this segment, but that does not bother me. 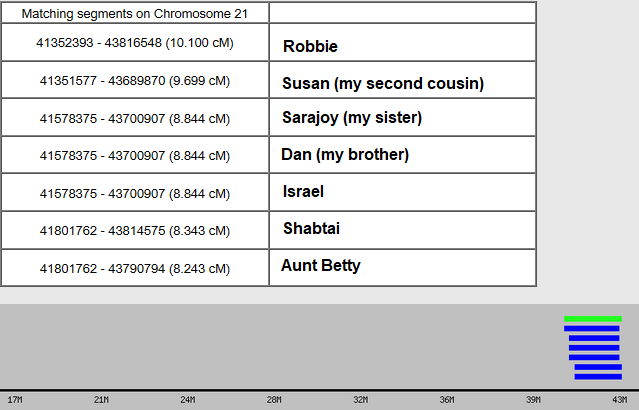 
I've built out much more of my family tree since we communicated last, at which point I was just beginning the research. I took a look again at the info you shared in your email and have noticed a possible connection.
I've followed my mother's line back to my great-great-grandmother. Her name was Szara Hercz, born 1830 in Berczalja, Saros, Kingdom of Hungary (current-day Slovakia). I wonder if that could be the link we share on your Hungarian branch as you mentioned the name Hercz? She married Saja Czigler (born 1829) and their daughter, Anna (b. 1859) emigrated to the states in 1892. One of her daughters was my great-grandmother, Blanche Zuckerman, who died in New York when I was a child.

So perhaps this segment come from a common Hercz family. Or not. Our relevant towns are 156 miles apart which proves nothing one way or another. (Actually, her Hercz family lived quite near my great-grandFATHER's family.)

Nava has no matches with our six Bauers (or Robbie) over 10 cM on any other segment, though she does have a small match with my brother and my cousin Susan on the same segment.Of course, that needn't be from the same ancestor as the one on Chromosome 21.

This brick wall will fall
How, I don’t know. More testers, more patience by me, more DNA analysis tools – for the DNA itself and for the test results – more older records, more traditional genealogy research to find additional descendants of these families, even cleaning up the Kunszentmiklos cemetery.

When, I don’t know that either. I’d like to think it will be in my lifetime.

For now I need to keep shining a light on this corner of my family genome. We never know what will prompt a breakthrough.

But this brick wall will give up its secrets.

Israel Pickholtz is a US-born professional genealogist who has been living in Israel for forty-six years. His flagship work is The Pikholz Project, which means to identify and reconnect all Pikholz descendants. He blogs at http://allmyforeparents.blogspot.com, writes and speaks on genealogy in Israel and abroad as the opportunities arise and is a member of the Israel Genealogical Society, Gesher Galicia, the Guild of One-Name Studies and a number of SIGs and research groups and a two-time alumnus of the Genealogy Research Institute of Pittsburgh. In 2015 he published his book "ENDOGAMY: One Family, One People" about his successes with DNA and lessons that are relevant to all genetic research. He has recently relocated from Jerusalem to Ashkelon and can be contacted at IsraelP@pikholz.org .
Posted by IsraelP at 3:33 PM