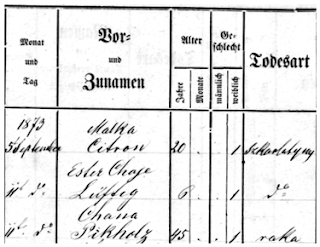 
8 January 2018 as part of the Yad Vashem / Central Zionist Archives series “From Roots to Trees” at Yad Vashem in Jerusalem.
5:30-6:15 – The Importance to Genealogy of Understanding Jewish Culture and Customs
6:16-7:00 – Using Genetics for Genealogy Research
Posted by IsraelP at 5:06 AM No comments:

Scoring A Big DNA Win - For My Cousins 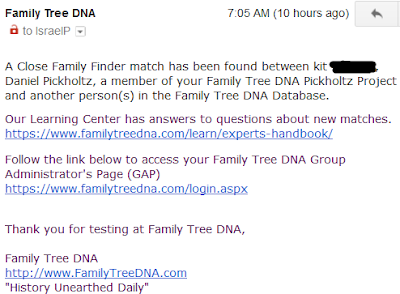 I manage over a hundred family DNA kits, almost all with Family Tree DNA. So I get many scores of these notices every week. Not only each person, but since, for instance,  Dan is a member of all five of my projects, I get all of his notices five times. Others are members of multiple projects and for them too I get multiple notices.These notices of "Close Matches" means matches that FTDNA considers to be suggested second-third cousins.

A few months ago, I decided to deal with these alerts in a systematic fashion. As I wrote in detail at the time, I decided to download as an Excel file all the matches during the month of May for each of my project members. Then I arranged them in separate Excel files by group: my mother's side, my grandmother's side, the Rozdol-Pikholz side, etc. That's a lot of work by itself but after that I had to sort by the names of the new matches to see who may have interesting matches with several people within each of my groups.

There were some successes, of the sort that determined that so-and-so is definitely connected to my family through my great-grandfather's Rosenzweig or Zelinka sides or my maternal grandmother's Rosenblooms. Most were either vague or turned out to be scattered across the family with no direction at all. I wrote about the successes for May and repeated the experiment for the June alerts, writing about those successes as well.

I got some of that done before the Sukkot holiday and during the Intermediate Days at the beginning of last week but it was very frustrating and I was not even getting the level of successes that I had previously with the Duncans and Robbie and Sam and the others.

I worked on the responses from my mother's side last night and this morning sent out analyses of the GEDmatch kits of about thirty of these supposed matches. One of those was for a woman named Barbara Jo Strauss, who had nine matches with people on my mother's side. People who appear in the Borisov Project that I am doing with Galit Aviv Sisto.

It turns out Barbara is the sister of Mark Strauss whom I met two years ago the day of my book launch at JGS Maryland. He was there with his wife's brother's wife who is a Skalat Pikholz cousin of mine. Mark is an experienced genealogy researcher with a good working knowledge of DNA and it was he who responded when I first wrote Barbara last week.

Barbara's results
I reported to Mark that Barbara had two Borisov matches of interest, plus a third which I considered marginal at best. 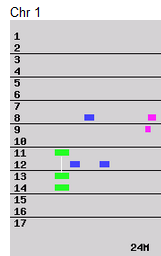 The three green bits on chromosome 1 are 11-12 cM. The first is my second cousin Sam, the second my first cousin Kay and the third my second cousin Inna. That means one representative of each of the three children of my great-grandparents Israel David and Etta Bryna Rosenbloom.

This is not impressive at barely 12 cM but it is definitely a valid match. (Kay has no Jewish DNA on her father's side, so that pretty much eliminates the endogamy factor.)

We have only the one surname Rosenbloom on my grandmother's side, so it's really not much to work with - like so many others of these alerts analyses.

Chromosome 6 has a slightly stronger match - 14-15 cM - with four of my parents' children, my first cousins Kay and Leonard and a second cousin Liya. No one from Uncle Hymen's family. This too appears a legitimate match, though it was also unlikely to lead us anywhere absent some Borisov or Rosenbloom knowledge from Mark.

There was one other match I didn't even mention to Mark. A segment on chromosome 10 of near-identical 13.5 cM matches with five of my parents' children, but with not a cousin to be found, it was quite useless.

The one I thought marginal is on chromosome 12. There Barbara has matches of nearly 15 cM with my father's sister, my brother, one of my sisters and my second cousins Rhoda and Marty, who are sister and brother. Together with those are smaller matches with my other three sisters and me.


So that is a match on the east Galician Pikholz or Kwoczka side and those never go anywhere, as we have so little to work with in the way of surnames.

I reported all of this to Mark in my usual generic fashion, without all the names and numbers. His response was:


Ok.  If you give me the kit numbers of a few of the most significant matches, I can see which of my cousins also match those same segments to narrow geography and surnames.

Mark then asked me for more detail about Rhoda because she is Barbara's best match among my project members - 90 cM total with a largest segment of 41.1 and 11.1 cM of X to boot.


They all share my paternal grandmother’s Berkowitz family in common, originally from around Humenne, in Eastern Slovakia, near the border with Ukraine. Other known surnames are Eichler and Burger.

For some reason I do not recall, I had discussed Rhoda's mother's family with her a couple of years ago and remembered that someone was from Slovakia/Hungary. Rather than hunt through my correspondence, I copied Rhoda on my reply to Mark. A few minutes later Mark told me that Rhoda's maternal grandmother was indeed an Eichler with the correct geography. He and Rhoda share a fourth-great-grandfather "Moyzes Eichler, who was born in 1785 in Hencovce, Slovakia."

And Rhoda (who carries the name of our second-great-grandmother Rivka Feige Pikholz) just told me that her youngest daughter has taken an interest in genealogy.

So that is a success for Mark's family and for Rhoda. For me it's a collateral success and a good reason to continue plugging away at the FTDNA Alerts. Of course, it helps when the person on the other end of the conversation understands the material.

Perhaps I'll send a notice about this blog to all those whom I've been talking to about alerts this month.

Housekeeping notes
Cousin Debbie's sister's DNA results just came in. She does not have the big segment that Debbie shares with us, but when we get her on GEDmatch, we'll see if perhaps she has some other matches of interest that Debbie does not.
Posted by IsraelP at 6:45 PM No comments: