Rosa Pickholz, the Teacher, Her Family 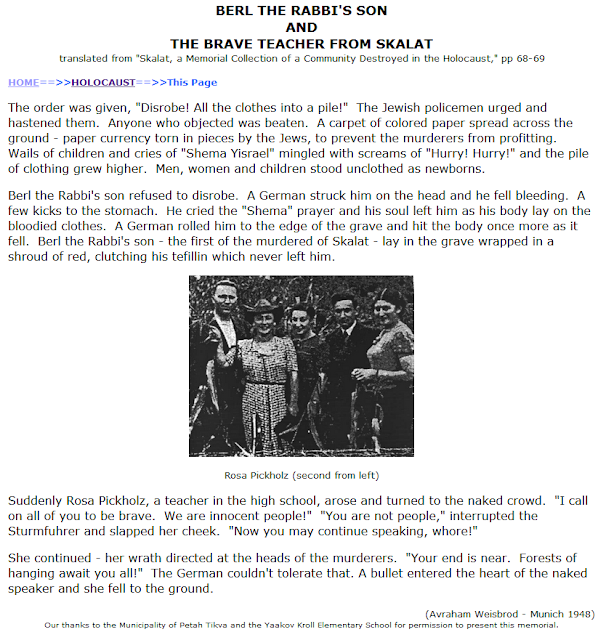 I posted this on the small Shoah section of the Pikholz Project website, with permission. It was published by Avraham Weissbrod in his Yiddish yizkor book "Skalat, Death of a Shtetl," pp. 58-59 of the Hebrew translation and reprinted in Haim Bronstein's Hebrew-language "Skalat - A Community Destroyed," pp. 68-69.

The Weisbrod version contains one additional sentence which Bronstein omits.


The crowd envied her pain-free death.


So why am I writing about this pre-Passover event now? Well, it's about the new records and her family. 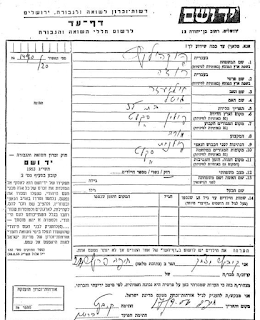 Until now, we knew that her parents are Eliezer and Gittel and that she was 35 years old, based on a Page of Testimony submitted to Yad Vashem by Yitzhak Kiwetz in Haifa. Yitzhak filled out scores of Pages of Testimony and did not explain his relationship with any of the victims.

A later Page submitted by Giza Zehavi names Rosa's father but not her mother and says she was 38.

Yitzhak's grandmother Chana Chaja Pikholz was married to a man named Eliezer (~1822-1878) with dozens of descendants, including a number of Eliezers, but I could not find anyone among them who might be Rosa's father. (I have just submitted a Y-37 test for the one living male-line descendant of this Eliezer.)

The identity of Rosa's Pikholz family has been nagging at me for nearly twenty years. The only other thing I knew was that Rosa had a younger brother Moshe (aka Munio) whose wife was Giza's aunt. And that Rosa herself was never married.

Last week, I reported on my first look at the newly-available Skalat records from JRI-Poland and I have now had a deeper dive. One of the new marriage records was Leiser Ber Pickholz (b. 1876) and Marjem Gittel Baras from Zbarazh. Leiser Ber's parents are Leibisch and Ruchel Pickholz, according to the marriage record, which we have only as an index.

I have long known of Leib Pickholz and his wife Rachel Qualer (or Kweller). She was from my grandfather's Zalosce. (There was a Zalosce Kweller in my high school class in Pittsburgh.) I had always assumed that their first known child Leiser Ber had died in childhood, as they had a son Markus Leiser in 1884. But this marriage record made it clear that he lived to adulthood. I went back into my colllection of records for people whose places in the Pikholz family were unknown.

So Rosa was shot dead two months after her fortieth birthday and her brother was killed the same day. Moshe was Max, a name almost always associated in east Galicia with Mordecai.

So we now know Rosa's parents are Leiser Ber and Marjem Gittel and that her grandparents are Judel and Reisel Baras(ch), Leib Pickholz and Rachel Qualer. Leiser Ber had five siblings at least three or four of whom did not survive early childhood.

Who is Rosa's grandfather Leib? I mentioned this last week. We know Aryeh Leib Pikholz who was born about 1829 and lived until 1919. His wife Sara Kreisel Glisner died in 1874. They had six children, four of them under age fifteen when Sara Kreisel died. It would have been normal for Aryeh Leib to marry again.

Did this forty-five year old widower with youngish children marry Rachel Qualer, who was barely twenty. Their first child Leiser Ber was born in 1876. I think that is what happened but I am not going to enter that into my database, other than in the comments as a "probably." I am too conservative for more than that. But if it is true and if Aryeh Leib's father Mordecai is indeed the brother of my g-g-grandfather Izak Fischel, Rosa is my father's third cousin. I shall begin referring to her that way.

Now I wonder who Rachel Qualer's family is. She and Leib didn't find each other on J-Date. And Skalat and Zalosce are not close enough for casual contact. She must have been someone's relative. I'm betting it had something to do with my Uncle Selig.
Posted by IsraelP at 7:06 AM