Robbie
A couple of weeks ago, I described my new approach to handling the alerts I get from Family Tree DNA for Family Finder matches. I had some minor successes but it was a lot of work. My June inquiries - which related to test results received during May - produced two good but non-specific results, one for the families of each of my grandmothers. And responses are still trickling in.

Since the Pikholz family is much larger and less well-structured than some of my others, I decided to concentrate my July inquiries on my grandmothers' families. One of them produced this match with Robbie from Chattanooga. 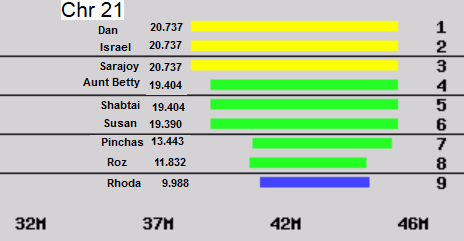 One of the interesting things here, before even looking at the numbers, is that Robbie has no other segments in common with any of the nine kits on chromosome 21.

The first three are my brother, one of my sisters and I. Aunt Betty is my father's sister. Shabtai is my father's second cousin on my grandmother's mother's side and Susan is my second cousin. This group of six matching segments points to the family of my great-grandmother Regina Bauer. Her father's family - the Bauers - lived in Kunszentmiklos Hungary and before that in Apostag. Her grandmother was probably a Lowinger. Regina's mother is a Stern from Pacs and Kalocsa Hungary and additional surnames are Grunwald and Hercz.

Robbie's other three matches here are on my father's father's side. Rhoda and Roz are my second cousins, first cousins to one another. Pinchas is my third cousin, the great-grandson of the brother of my great-grandmother Jutte Leah Kwoczka. But these three have an additional connection that has nothing to do with my family - the Zwiebel and Lewinter families from Tarnopol - and that is the source of Robbie's match.

These two groups triangulate; there is a common ancestor between the two groups. So it appears clear that someplace back in genealogical time there is common ancestry between Shabtai's Hungarian Bauers or Sterns and the east Galician Zwiebels or the Lewinters. Back in time, but recent enough that segments in the 12-21 cM range were preserved in both groups.

If this looks familiar, it should. I wrote these two sentences almost exactly one year ago. About a smaller version of the same segment.

The only person missing here is my brother who tested a few months later. But it's the same segment. The match is with Carolyn.

Carolyn and Wendy are trying to identify Carolyn's father, a man who left her some clues on chromosome 21. Something to do with the Bauers or the Sterns and the Zwiebels or the Lewinters.

And, it turns out, Robbie has exactly one segment over 5 cM that matches Carolyn and that is, of course on chromosome 21.

Unfortunately Robbie doesn't know anything about this corner of his ancestry.

Sam
As I mentioned above, some of the responses from last month are still trickling in. Sam, for instance. He was travelling so he got me his GEDmatch number a bit later. I looked at his matches last week and saw a few bits related to my mother's side. Plus a set of six on a segment of about 17 cM on chromosome 17, but it was just my father's children,  sister and brother, there were no cousin matches to help us be more specific. I write this:


> Well, there are a few places where you have matches that point to my
> mother's mother's Rosenblooms from Borisov (Belarus). Nothing huge, but
> it's there. Unfortunately, we have no other surnames there to work with.
>
> There is a segment of not quite 10 cM which includes my father's sister, three
> of my father's children a second cousin on my gm's side and a second cousin
> of my father on my gm's mother's side. Those would be Bauer, Stern,
> Gurnwald, Lowinger and Hercz from Kunszentmiklos, Kalocsa and elsewhere
> in Hungary. Not very strong, but it's there.
>
> Maybe something with my p-gf's mother's Kwoczka from Zalosce in east
> Galicia.
>
> There is a nice segment of ~15-16 cM with my father's sister and brother plus
> four of my father's children, but no cousins, so it's hard to say more.
>
> Thank you for particiipating.
>
> Israel P.


Minutes after concluding my analysis of Robbie's single segment, an email came from Sam.


> Well thanks for your response!
> I'm pretty new at this. Where do we go from here?

I reviewed his matches and what do you know, that "segment of not quite 10 cM" is on chromosome 21.

It's a smaller version of Robbie and Carolyn's segment. Roz is missing because her 5.9 cM match is under the threshhold and simply didn't show up in Sam's results.

And like Robbie, Sam matches Carolyn here and no where else, using the standard threshhold.

Sam also has a small triangulated 7-8 cM segment with Rhoda and Shabtai on chromosome 7, showing once again that the two families have a history.

Eventually this wall will crack. And my approach to the alerts is working.
Posted by IsraelP at 1:21 AM