The Bauers of Kunszentmiklos - Part Two

Continuing the story of our visit to the cemetery in Kunszentmiklos.

As I said previously, I had four goals in mind for this visit.

1. Visiting and photographing the graves of my known relatives.

2. Clarifying the source for my father's name.

3. Clarifying the name of my second-great-grandfather's mother.

4. Gathering whatever information I could about the many members of my great -grandmother's Bauer family.

My father's name is Eliezer Yitzhak. My grandmother said many times over the years that he was named for her mother's brother Lajos Bauer, who was a government official under Emporer Franz Josef. Being a trusting sort, I took her at her word and assumed that Lajos was Eliezer Yitzhak.

But over the years, I began to wonder. Lajos' paternal grandfather was Lazar Bauer. Perhaps my father's first name was for him and the Yitzhak was for someone else. But who? And my grandmother was no longer here to ask.

There are two obvious possibilities. One is her own other grandfather Isaak Leib whom I wrote about a few days ago, at the start of this series. He - like Lajos - had died in 1917, six years before my father was born. But then why did my grandmother never say that he was named for her maternal uncle and her paternal grandfather?

And of course there was the possibility that both names came from Lajos.

So now I have visited Lajos' grave and he is only Eliezer, plus Simon's grave says his father is just plain Eliezer. So although I will still probably never solve the Yitzhak identity, at least I have eliminated one possibility. 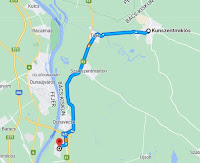 This Lazar was married to a Rosa Lowinger (~1796-1879) and they had a daughter Katalin. Katalin was married to Jakob Speizer and died in 1921 in Kunszentmiklos. I did not see a grave for her there, not for Lazar and Roza. There are conflicting documents for Katalin's birth year, but she could be a sister of our Simon.

So on one hand, I have been listing Lowinger as one of my ancestral names. But on the other hand, I have not recorded Lazar and Roza as Simon's parents. There could, after all be two Lazars.

What I was hoping was that Simon's grave would name his mother. That happened a lot in Hungary. In fact, Simon's epitaph ends with "His mother's name is Rachel." Not the Hebrew name Rachel, but spelled as non-Hebrew name - resh-yod-yod-tzadi-yod-lamed. Could that be Roza? Very possibly. Would I call that additional evidence to enable me to assign Simon to Lazar and Roza. No way.

I was hoping to find a grave for Simon's father Lazar/Eliezer in Kunszentmiklos. But if he died in 1867, his grave (and his wife's?) would be closer to the front of the cemetery where there are no stones. It is also possible that since he was born in Apostag, he might have wanted to be buried there. We had a brief look at the cemetery there - it has some 400 stones and many are in good condition. We'll spend one day there next week.

Now one other thing. My grandmother told me a family of cousins that her mother Regina had, two of whom lived in Pittsburgh. Those cousins were born in Szécsény in northern Hungarian to Josef Heidenfeld and Lina Lowy (or Lowi or similar). There are instances of Lowinger becoming Lowy. So there's that.

Some years ago, I made an outline chart of Bauers from Kunszentmiklos, based mostly on birth and death records. Just as in Galicia, the birth records do not include the parents of the father, which makes it hard to identify family members. I had hoped that the cemetery would help by adding the fathers' names. That outline chart is here. Note that ten people were born in Apostag, maybe a few more.

As far as the cemetery goes, I can only beg excuses. Photography is not one of my talents. The sun did not help. The black stones gave very poor contrast. Hungarian on one side and Hebrew on the other. The sun was more of a problem on the Hebrew sides. This will take a lot of work and I am not sure what its value is.

The situation was not conducive for note-taking, nor was my patience. My clipboard was in the missing suitcase. There was no place to sit and write. Or to sit and rest.

I saw some graves which I recognized from the records with information that I knew to be useful. I may do something with this... eventually.

Here are some of the better examples. 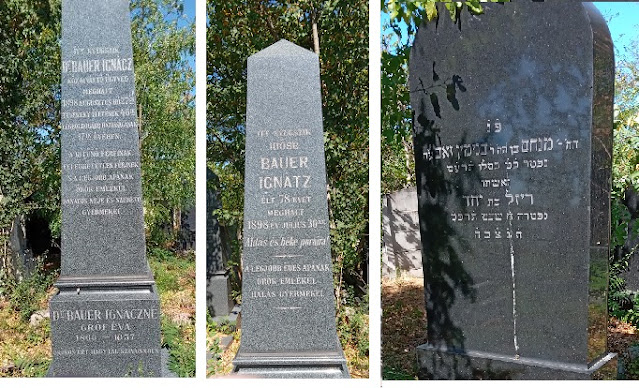 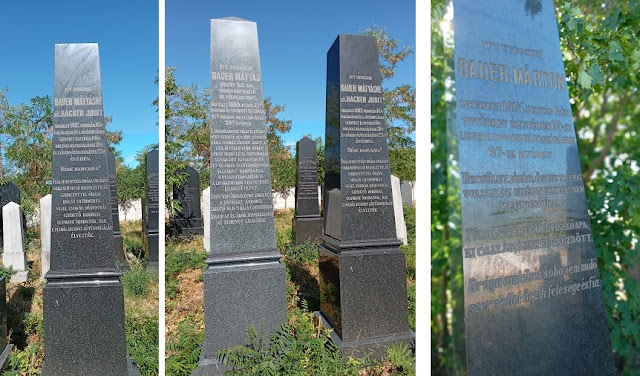