I mentioned earlier in this series that at least that at least ten of the Bauers in Kunszentmiklos had been born in Apostag and there are quite a few Bauer records there. So I figured we should have a look at the ~400 graves there, just to see what shows up.

That became our Sunday project, partly because the cemetery in Apostag has a coded lock and there is no need to bother anyone about a key on a Sunday. We began Sunday a bit later than usual as the Steelers played Saturday night and I stayed up for that. 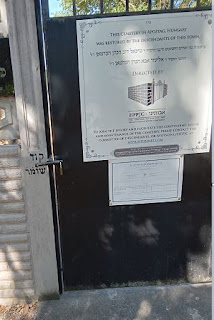 We let ourselves in and walked around for a couple of hours, seeing some families we recognized but no Bauers. A lot of stones in poor condition but many of which were easily legible. Just not of interest.

And as we had already discovered, many Hungarian tombstones do not reveal the father's name. So even if we were to find Bauer graves, they might not tell us anything useful. It made for a frustrating way to start the week.

I was ready to go back to Dunaujvaros but Rona wanted to get more of a feel for the places my ancestors had lived, so we went back to Kalocsa, the home of my third-great-grandparents Zelig and Bluma Stern. When we were there last week, I mentioned it to Linda - remember she and I had been here five years ago - and she said I should send her regards to Andrej from the Club Hotel, where we had stayed. 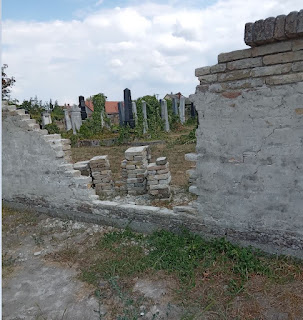 So Rona went looking for Andrej and found him with some effort. He definitely remembered Linda. (Linda is like that - memorable.) Andrej got into the car with us and directed us to the larger, newer, locked cemetery not far away and then took us to the shul. I took him home while Rona walked around and I actually managed to find her afterwards.

Then we went to the new cemetery. It was indeed locked, but the neighboring Hungarian cemetery was open and there was a breech in the wall between them and we pretty much walked right in.

And once into the Jewish cemetery, who is the first person we see? Ignacz Stern, the older  brother of my second-great-grandmother Fani Stern! Called Izak Leib after his paternal grandfather. We knew of Ignacz and his approximate age from his 1871 Kalocsa marriage record to Betti Schneider and now we know that he died at age 68 on 20 March 1905. According to the stone, this was "Esther Taynis," the way my grandmother always said it.

But there was one important bit of information that surprised me, on the very last line. "And his mother's name is Rivka." Not Bluma. We know that Fani (who was born maybe three-four years later) was the daughter of Bluma because it says so on her grave in Kunszentmiklos. And Fani herself is named for Bluma's mother.

Now it could be that there are errors on one or more of the tombstones. And it could be that Fani's mother was Rivka but Bluma brought her up so she was considered to be her mother by the family. And it could be that Bluma and Rivka are sisters, so Fani would be the mother of them both. But I am going to go with Occam's Razor here and say that Ignacz was the son of Rivka and the others were from Bluma. All of them, of course, the children of Zelig Stern.

Not all the stones in the new Kalocsa cemetery were in such pristine condition, but I was not able to identify and other Sterns. Nor did I see either of Fani's two younger married sisters.

But the Kalocsa cemetery had not yet given up all of its surprises. As I discussed earlier, Bluma is a Grunwald from Perkata. That's about seventy kilometers away today. Not very far but not close either.

There are a number of Grunwalds buried in this Kalocsa cemetery I cannot help but wonder if this is Blima's family. None that I can connect to Bluma, but it would not surprise me to know that there is a close connection. This will take some serious work in the Kalocsa records.