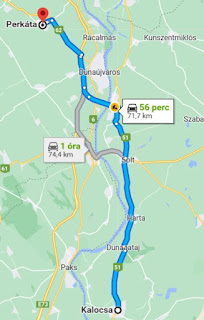 When my cousin Linda and I were here five years ago, we visited Kalocsa, about forty minutes south of Kunszentmiklos. That's where Fani Stern was born before marrying Simon Bauer in Kunszentmiklos and where we knew her father had died in 1862. The cemetery there is adjacent to the main highway, no fence and in quite good condition. Linda found Fani's father Salomon Stern (Yehoshua Zelig) fairly quickly and I found his wife Bluma (d. 1887) a couple of rows away.

Although they raised their family in Kalocsa, the records showed that both were born elsewhere. Zelig Stern, our third-great-grandfather had been born in Paks and Bluma in Perkata. From his tombstone we knew that Zelig's father was Izak Leib and Bluma's death record told us that her parents were Jakob Grunwald and Fani Hercz.

We planned Perkata for Friday and Paks for the following week, but in he meantime, we visited Zelig and Bluma's graves in Kalocsa. 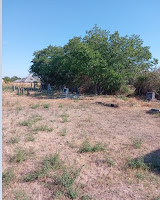 I do not know how big the Jewish community was in Perkata. It does not appear in JewishGen's Gazeteer or Town Locator. I had learned from the cemetery organization MAZSHISZ Ogyvezwtoi Titkarsag that the cemetery had twenty-six tombstones and it was unfenced, next to one of the town's streets. I assume that there had been more than twenty-six, but the area was small, so apparently the community was never very big.

Perkata is a twenty minute ride north of Dunaujvaros, where we are staying, and we found the cemetery on Ady Endre Street with no problem.

I had hopes of finding Jakob Grunwald's grave. None of Bluma's children or known grandchildren were named Jakob, so his stone might be relatively new. And legible. His wife Fani died before his granddaughter Fani was born (1842), so chances of finding a legible stone for her seemed lower. 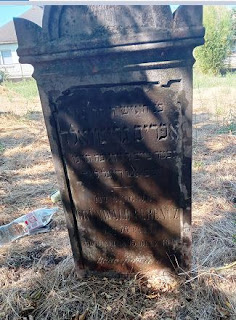 The first two legible stones were Grunwald, in adjacent plots. Ferentz Grunwald (Ephraim Grinwald in Hebrew) died at age 76 on the fifth day of Hanukkah 1896, December 10. Both the Hungarian and the Hebrew are on the same side. His father was not named but his mother is Rachel Leah. (Rachel is spelled resh-yod-yod-tzadi-lamed, not the usual way.)

He could be our Bluma's half-brother from a different mother. Or a cousin.

She appears to be unmarried and her father is Yaakov Yuda. I think I am willing to declare her Bluma's sister, which adds a second name (Yehudah) to my fourth-great-grandfather. This is an easier decision because the community was very small. Bluma's stone does not name her father and having only one of the given names on her death record (Jakob) is not unusual.

I am less certain about Ephraim as a half-brother, but I still think it fairly likely, especially since he and Perel are in adjacent plots. In fact, considering the ages, it seems to me that Pepi is also a half-sister of Bluma, not a full sister.

Here is Perel, Hungarian on one side, Hebrew on the other.. Once again, I apologize for the quality of the photographs. 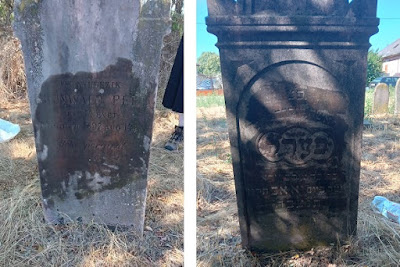 An additional Grunwald is also buried in Perkata. This is Katalin who is buried next to Lipot Mandl. I assume this is a married couple but there is no further information, though the stone seems to me to be newer. 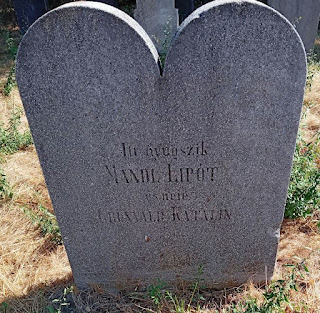 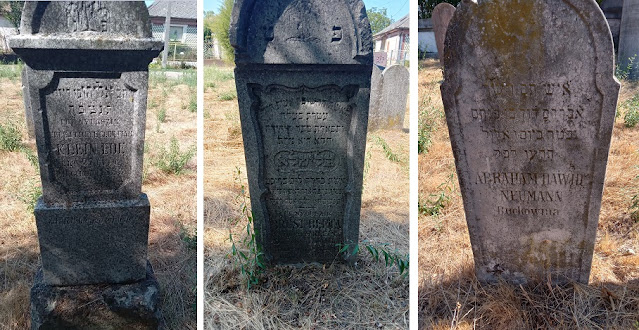 Upon our return to Dunaujvaros, our suitcases were delivered, ninety-two hours after our flight landed.