My paternal grandmother's paternal grandfather is Isaak Leib (Ignacz) Rosenzweig, Yitzhak Yehudah in Hebrew. He was born in Pucho in Trencin County Slovakia, about 1821 and according to my grandmother lived to age ninety-six. His wife, Mali (Miriam) Zelinka, died in 1905 at age eighty, in Vag Besztercze which is known today as Povazska Bystrica. Her death record notes that she was buried there.

I do not have a date or document for Isaak Leib, but I have certainly assumed that he too was buried in Vag Besztercze, possibly next to his wife.

Five years ago, I visited Povazska Bystrica with my cousin Linda and our fifth cousin on the Zelinka side, Cyndi Norwitz, and described that visit in a blog post, one of eight from that trip. The conditions on the ground were difficult and many of the tombstones were broken, scattered or illegible. 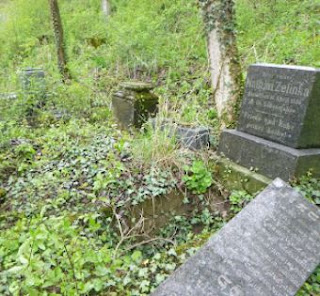 But we found the stone for Nathan (Nahum) Zelinka, Mali's brother. Broken off but completely legible. He was an important member of the community in Zilina. Next to Nathan were two stones that had fallen face down in the mud. There was enough of a pedestal left for one, to tell us that it is for a ninety-two year old man.

I got it into my head that these two must be my second-great-grandparents, with Mali buried between her brother and her husband, despite the small discrepancy in the man's age.

For the last few years, I have been trying to get the local Jewish community to turn those stones over so we can see if they are ours. I am not so much interested in setting the stones back in place - I do not expect that anyone in the family will ever come to visit again. I just wanted to confirm that these are my second-great-grandparents and to see exactly what is written on the stones.

A few months ago, things began to fall into place both for his couple and for several cemeteries I wanted to visit on my great-grandmother's family, in Hungary.

My wife and I bought tickets for Budapest for last Monday intending  to go to Povaszka Bystrica the first day, then to Hungary for the subsequent days. Sunday, the folks in Slovakia told me that they had turned over one of the tombstones.

Joachim Grun. Not my Rosenzweig. But the name Grun is familiar from my Rosenzweig research. My Isaak Leib's father Simon was married twice - once to Isaak Leib's mother whose name is unknown. Then to a woman named Sali Grun, whose father is Jakob. Ancestry's ThruLines keeps telling my that Isaak Leib's mother is Sali Grun when we know he isn't and the several people doing Grun research insist on leaving that as is. I have no idea who Joachim is.

So they wrote me as follows. "We turn around first grave stone, second one is bigger is larger so I want to ask if it important for you."

I replied "Let me say it this way. I do not know Joachim. But that does not mean that the second grave is not important. I do not want to go to my grave wondering if we overlooked something so close at hand.

Nathan's sister died in 1905 so maybe she was buried next to him. But her husband who died ~1917 may be someplace else."
I had set to meet them in Povaszka Bystrica Tuesday, so we proceeded with that plan.
Then Monday, things began going wrong, some self-inflicted, some beyond our control. It didn't work out with our driver to the airport, so we had to drive ourselves and leave the car at long-term parking. (Please do not tell me we had other options.) It looked like we would miss the plane, but we boarded as planned. Our luggage did not. And there were a few other issues.
The plans to meet in Povaszka Bystrica fell through with one person after the other, but we made our way to the pension at about 10:30 that night. I'll spare you the details, but let's just say it was not my style. 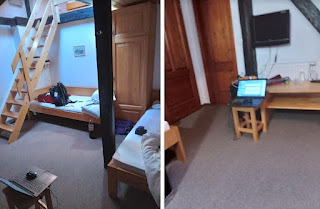 Tuesday we left for Budapest, stopping at the Povaszka Bystrica cemetery, just to say we had been there. Rona went in; I did not. All I wanted to do was to get to the Kosher Market, since all our provisions were lost who-knows-where. I wanted to get to our Airbnb in Dunaujvaros Hungary and restart everything the next day in Hungary.