Five years ago, my cousin Linda and I visited the cemetery in Kunszentmiklos Hungary. Our great-grandmother, Regina (Rivka) Bauer was born there. Her father too.

I remember my great-grandmother, who died when I was nearly three. She lived with our grandparents and used to give me M&Ms. She and her husband are buried at the Poale Zedeck cemetery in the Sheraden neighborhood of Pittsburgh. My grandparents and other family members are buried there as well. 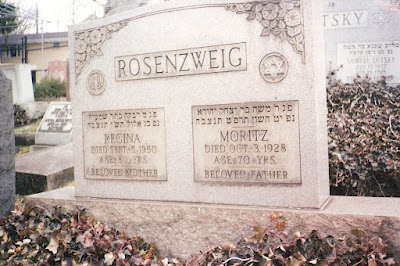 There are dozens of Bauers buried in Kunszentmiklos including the parents of my great-grandmother and her brother, who is my father's namesake. But when Linda and I were there five years ago, it was badly overgrown and we could not see anything of use, although many of the stones themselves were in very good condition. I wrote about that visit as part of an eight blog series describing that trip.

So here we were, Wednesday morning headed from our Airbnb in Dunaujvaros to Kunszentmiklos thirty-six km away, to meet Imre, the keeper of the key to the cemetery. They truly did an excellent job cleaning up the cemetery and making the existing 189 tombstones accessible to visitors, though it is not easy walking around.

By the way, all the Bauers are written בויער in Hebrew, pronounced Boyer.

I had come with four goals in mind for this visit.

1. Visiting and photographing the graves of my known relatives.

2. Clarifying the source for my father's name.

3. Clarifying the name of my second-great-grandfather's mother.

4. Gathering whatever information I could about the many members of my great -grandmother's Bauer family.

I knew from cemetery records that my great-grandmother's parents and brother were buried in Kunszentmiklos. This would be Simon (Shemaya) Bauer (died 1902), Fani (Feige) Stern Bauer (died 1911) and Lajos (Eliezer) Bauer (died 1917).

I expected that my great-grandmother's older sister Ilona (Dobrisch) Bauer Wiesel (died 1893 at age 30) was also there because I have seen her death record. This even though I have not seen her in cemetery records.

Simon and Fanny are side-by-side, with Hungarian on one side and Hebrew on the other. The Hebrew sides did not photograph well, because of both the quality of the work and the direction of the sun. But I bring it all here. 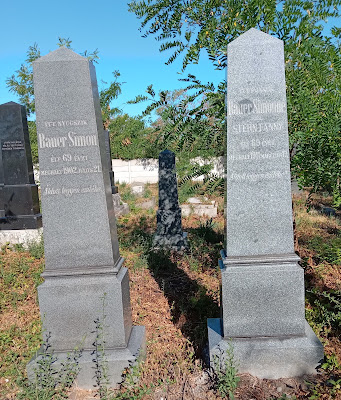 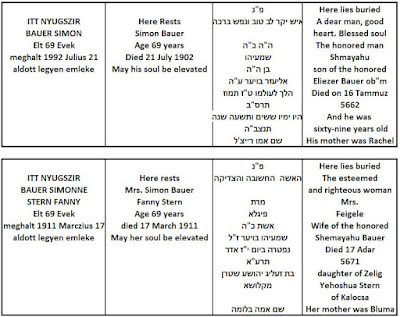 I find it interesting that Simon is called Shemayahu on his stone and his wife's, but the simpler Shemaya everywhere else, including my father's cousin Simon who is named for him.
And Fani is called Feigele rather than the more formal Feige on all the stones.
Their son Lajos is right behind them in the next row. (You can see his stone between theirs.) He is called a young man (bachur) at age 42 because he never married. My grandmother always said that my father was named for him. Lajos' epitaph is all on one side, with both Hebrew and Hungarian. 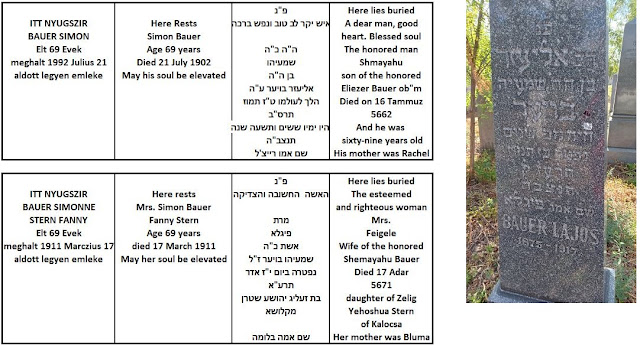 A bit later, as we were looking at some of the older, more difficult stones, I saw this, which Rona enhanced with a bit of water. 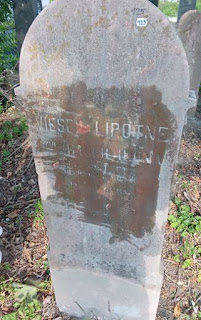 The other side is in Hebrew. Here is a partial photograph. 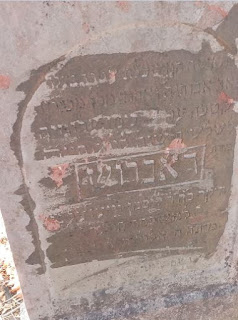 The educated woman, crown of her husband

Pride of her family and beloved of her acquaintances

Plucked away in her youth, age 30

Dear to her husband Lipman Wiesel

From the Bauer family

Her mother's name is Feigele.

This is the eldest of Simon and Fani's children and Regina named her daughter Helen after her in 1896.

I shall address more of my Kunszentmiklos goals probably tomorrow.