Beyond A Doubt - Another Resolution

I have a lecture about dealing with things we are quite sure about but do not have the supporting proof. It may not even be available.

In that presentation, I break the general question into seven considerations and give an example of each. For each example I decide to accept the conclusion into my family database or to reject it for lack of sufficient evidence.

Example #5 deals with the family of Gabriel and Sara Pikholz of Husiatyn. They had a son Moses in 1851 and I have been quite convinced that this is the same Moshe who married Chana Muhlrad in Skalat and together they had eight children in the period 1874-1894.

I also believed that this Gabriel is the son of Nachman Pikholz who was born about 1795.

I discussed this family in some detail three years ago. 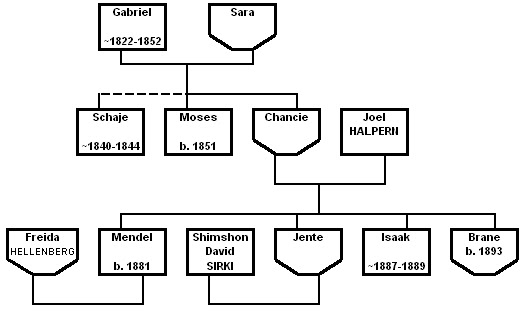 This is the family of Moshe who I would like to think is the Moses born in 1851.

Moshe's granddaughter Miriam Reiner told me that her grandfather had "died young," well before she was born in 1913, but could not be more specific. In fact, I found an 1894 death record for a Moshe Pikholz in Skalat, which seemed to make everything fit - but for one little problem. The Moshe in that death certificate was fifty-seven years old so could not have been born in 1851.

On the other hand, we had no unaccounted-for Moshe born around 1837, so the death record may have simply had the age wrong.

But I could not justify a decision to say that Moses from Husiatyn was indeed the father of the Skalat family and in the conclusion to my presentation, I left the matter unsettled.

A couple of weeks ago, Mark Halpern of JRI-Poland sent me a spreadsheet with 695 Skalat deaths during 1908-1915. That list includes twelve people named Pikholz and at least two other Pikholz family members with a different surname. Most of the twelve are listed without names of parents or spouses, so it is not always clear who the deceased is. For instance, there is a Josef Pikholz who died in 1909 and I am not sure if this is the one born 1862 or the one born in 1863.

The index also does not include towns of origin, at least not for our entries, but those may appear on the actual records.

The entries have ages, of course, and also house numbers. The actual records have always had house numbers, but they were usually not included in the index.

Moses Pickholz who died in 1908 at age 57, so would have been born 1851. This is a perfect fit for Moses from Husiatyn. So perhaps he is not the father of the Skalat family and there are two separate Moshes.

But the house number is 23. Six children of Tobias - Moshe's son - and two of his grandchildren were born in that house. Surely this must be Tobias' father. 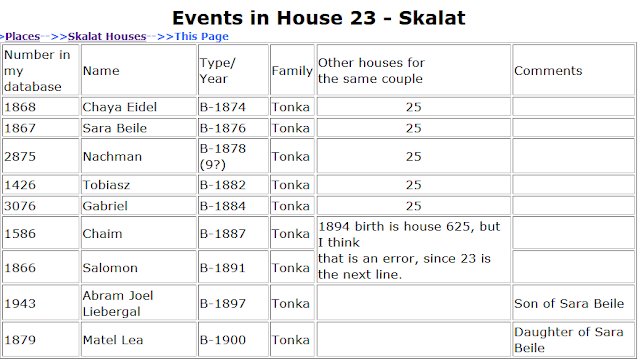 Furthermore, the new spreadsheet has a four month old daughter of Tobias dying in that house in 1912.

So I can now say without reservation that the Moshe who had the family in Skalat was indeed the son of Gabriel and Sara and was born in Husiatyn in 1851. That leaves me with an 1894 death record for a different fifty-seven year old Moshe Pikholz in Skalat - who on earth is that?

I'll write about some of the others in that spreadsheet in a subsequent post.

Housekeeping notes
My daughter-in-law in New Jersey had a baby boy a few hours ago. I am not going to chance a flight home after a Thursday berit, so I am in the NJ area a few more days. If anyone in NJ/NY wants a program Wednesday 15 February, Thursday 16 February or Sunday 19 February, please let me know and we'll see what we can put together.
Posted by IsraelP at 1:03 PM