The DNA of the Seventh Sibling

A few weeks ago, I began a series about the DNA of my own siblings after the Family Finder results of my recently deceased brother came in. (I have been busy with other things and have only done that single post, but I'll get back to it soon.) As I reported then, our full set of DNA comes from my brother, my four sisters and me - six altogether.

But in fact, we are seven. 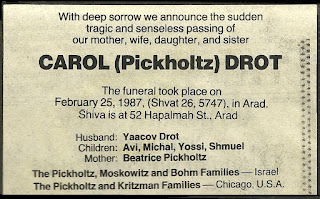 We lost one thirty years ago this past week.

I wrote about that terrible day in one of my very first blogs, five years ago and I shan't repeat it now.

This morning (Friday) some of us - including three of her four children and four of her nine grandchildren - met at the grave in Arad and then went for breakfast together.

The intersection was redesigned a few years ago and now is much safer. It includes two stoplights.

The grave needs some repair. The lettering has been repainted a few times. The empty section in front is now largely filled with new graves, so her children - kohanim - can no longer stand as close as they could when we chose the site.

Of course, we never took her DNA. But we have it because she and Judith are identical twins. We think. It seems there is some debate about whether the "identical" part is in fact proven, though that seems obvious to anyone with eyes and ears.

So yesterday Judith asked me if any of Carol's children have tested. She considered that might help solve the "identical" question. So this morning she asked Avi and Michal if one of them would test. Avi swabbed this morning and I'll send it in next time there is a sale.

Judith herself has three boys and will get a Family Finder from one of them. If the girls are identical, the tests will show the first cousins as half-siblings.

Both twins are married to kohanim who have some geography in common. I am not sure if I want to go there, but they can decide this themselves. (Both fathers are alive and well and can test if they wish.) 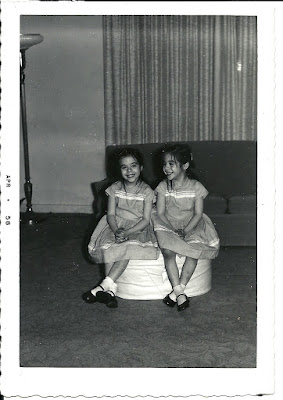