Six Siblings - Part Two: Who Is Closest To Whom

A week before he died two months ago, my brother gave me DNA. That gives us the whole set of six siblings. (A seventh was killed in an accident thirty years ago, but her identical twin is one of the six, so we count the set as complete.)

Part One - Origins is here.

Other than the randomness of DNA and the fact that siblings can be significantly different from one another (TEST THEM ALL, PEOPLE!), I am not sure about the value of this kind of analysis except to sate the curiosity of the family members themselves. Some have actually asked, which is more interest than they generally show, so here are some bits of data. Once again, the tables are in age order.

This table shows who matches whom how well, according to the FTDNA algorithm.

All four of the girls match Dan best of all.  After that, it's pretty random.

Dan and I match Sarajoy best and then Judith.

It is also interesting considering my blog a few days ago in which two nephews - sons of the identical twin sisters - are submitting Family Finder tests to see if they show up as half siblings.

Here are my first eleven matches - the five siblings, followed by my father's sister and brother Aunt Betty and Uncle Bob, then four first cousins.

Note that Aunt Betty, Uncle Bob, Kay and Linda all are rated as possible half siblings to me by FTDNA. These boundaries are far from clear and I often laugh when I hear people speak of these numbers as having absolute meaning - especially, but not only, in endogamous populations.

These are the numbers behind the "ratings" in the first table above.

Dan and Sarajoy share both the most DNA (2891) and the largest segment (253). Dan's second largest total is with Judith (2652), but his longest segment with everyone else is longer than with her (162). You can pick out other anomalies, but they are not really anomalies because there is no reason these numbers should line up in patterns. Not only is it randomness, but the totals are not that different from one another.

Then there is the matter of Aunt Betty and Uncle Bob - which of us is closer to which of them. 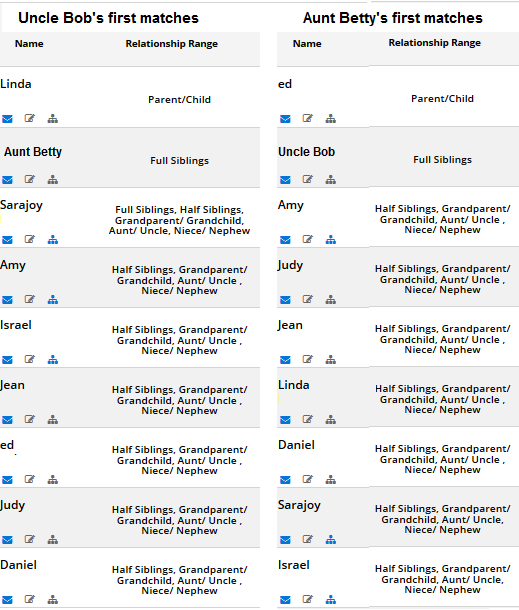 Uncle Bob's first match is his daughter Linda and Aunt Betty's is her son Ed. That's pretty basic. Then their match with each other. Followed by the nieces and nephews. The tenth match for each is their first cousin Herb, not shown on the chart above. Nothing much to see here except perhaps that Amy is the closest of us to Aunt Betty and the second closest to Uncle Bob.

Here I have included the centiMorgans because the differences are significant.

Kay is either first or second for all of us, with only one match below 900 cM. FTDNA considers her a possible half sibling with all of us except Judith.

Leonard is either last or next-to-last for all of us, with only one match over 900 cM and one as low as 592 cM..He is a possible half sibling only with Sarajoy.

This begs the question how close a match is Kay to Leonard. For both it's their top match, with 1126 cM total and a longest segment of 76. I'd be curious to see how their siblings would fit into this analysis, but unfortunately they are all deceased.

Ed is the top cousin for Judith and Amy, with more than 1000 cM but he is last for Sarajoy, Dan and me with less than 800 cM. Linda is over 850 cM with all of us. 850 cM is what the ISOGG wiki gives as the average for first cousins. On average we are above that and I don't thinks it's a matter of  endogamy.

In our own family we have some other first cousins: Herb with Aunt Betty and Uncle Bob, Beth with Beverly and Sam, Rhoda and Roz, Ruth and Judy and in the wider Pikholz families Gloria and Marvin, Sharon and Karen and the two Riss cousins. And some others in process. But I am not going to look at their numbers here.

Housekeeping Notes
I have two presentations coming up here in Israel. One in Hebrew in Rishon LeZion, but we have not yet set the date. The other in Raanana in two weeks.
16 March 2017, 7:30 – IGRA, Beit Fisher, 5 Klausner Street, Raanana (in English)
Lessons in Jewish DNA: One Man’s Successes and What He Learned on the Journey

For the attention of any program chairs (or anyone who knows program chairs), I'll be available in the US late April-early May of 2018. Another bar mitzvah in Chicago.
Posted by IsraelP at 5:03 AM