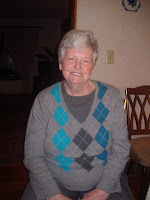 Less than a week after learning of the existence of my Rosenbloom/Kaplan second cousins (described here), I went to see my second cousin Lydia in Columbus Ohio. This was last Wednesday and I was on my way to a Thursday evening speaking engagement for JGS Michigan.

Lydia is eighty-two, was born in Moscow and has been in the US for twenty-two years. Why Columbus? Her late husband has relatives there. We were both very excited about the meeting.

As I mentioned last week, she has pictures. Her grandmother, for instance, a bit older than the mid-1920s photograph that we have. 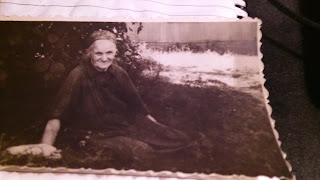 There is some difference of opinion about when Alta died - whether 1968 or 1973. But everyone agrees she was ninety-three. That's well into my lifetime and long after her younger sister, my grandmother, died in 1959. We should be able to check Alta's date of death as the whole family is buried together in Moscow's Vostrikovsky Cemetery.

I had always figured that Alta was born about 1880, as she had at least two grandchildren when contact was lost in 1929. I was quite sure she was several years older than my grandmother Sarah, because the younger brother (Uncle Hymen) was called Chaim Benzion because previous sons had died in childhood or infancy. There was not much room for multiple sons unless they were between Alta and Sarah.

Lydia says - and I think this is apocryphal - that when Alta was older, she would often be found wandering around Moscow and when asked her name, she would say "Alta Rosenbloom from Borisov." That's how the grandchildren came to know her maiden name and birth place. I have my doubts because her children - also born in Borisov - outlived her, and surely knew her history.

We took out pictures, she in a well-kept album that had been smuggled out of Russia and I on my laptop. We had identical pre-WWI photographs. Alta as a younger woman with her father - my namesake
- Israel David Rosenbloom, for instance.

She had the same majestic picture of Israel David that had hung om my grandmother's wall. It had hung on Alta's wall as well. And there were others.

But she had some that she could not identify. 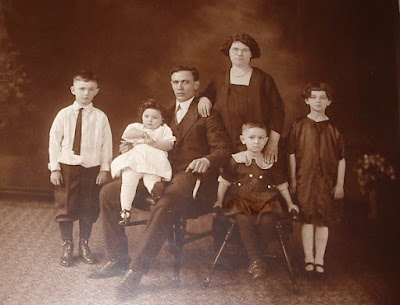 My grandparents in Vandergrift Pennsylvania, with their four older children. Mother was not yet born, so this would have been late 1924 or early 1925. And Lydia has an original baby picture of my mother, sitting on a stool.

She had one of Uncle Hymen and Aunt Becky with their two sons, taken probably 1926 before their daughter was born. And of course she had no idea who these people were. But she had preserved them in her album nonetheless.

We knew that Uncle Hymen had had some contact with at least his father until 1929, but it was now clear to me that the two sisters were also in contact. I had no expectations of my grandmother who never spoke of Russia and in her depression with small-town life far away from her family, burned some of her own pictures. But there it was. Well into the 1920s.

The labeling I cited last week on the picture of Uncle Hymen with Aunt Alta's family, is not completely correct. The younger daughter Sonya could not have been in that 1914 photograph as she was not born until after WWI. Apparently there was another sister who died and whom no one remembers. And the older girl in that one might be the half sister Aunt Mera, rather than Alta's older daughter Etta Bryna (Esfira in Russian).

Odd about that. All three surviving siblings, Alta, Sarah and Hymen named their first daughters Etta Bryna, after their mother. My Aunt Ethel and her husband adopted a daughter after a dozen years of marriage. She later had two naturally. Uncle Hymen's Ethel had no children and adopted a son. Esfira too had no children, but raised her husband's son from his previous marriage.

It was a joyous meeting, but far from complete. We will find a way to do this again and I hope to talk to the others in the family. Lydia gave me DNA. Her mother is not Jewish, so all her Jewish DNA is Rosenbloom and Kaplan. And she told me proudly "I did giyur" showing me a conversion certificate issued in Columbus. For now, her son - born 1965 - is not interested in any of this and in any case was not in town when I visited.

So here, if I have it right, is what we have added to our Rosenbloom family. Lydia's grandfather Lev was probably named Yehudah after Etta Bryna's father.

The following evening, my second cousin Reuven Rosenbloom and his wife came to hear me speak and on Shabbat I had lunch with a Rosenbloom cousin of the next generation.

Housekeeping notes
The Cleveland audience was excellent and included several Pickholtz descendants. They say there were 55-60 people and there were lots of questions. Earlier in the day, I had said kaddish with two of the Cleveland Pickholtz brothers and then went to the cemetery where their parents are buried. Their mother's stone setting is planned for Mothers' Day.

I am writing from Salt Lake City, I want to get some research in at the library tomorrow (Tuesday) and Wednesday, before RootsTech begins. I am speaking Friday at eleven o'clock.

Sunday I am off to California for the last two presentations of this trip. No Rosenblooms there, but there are some younger generation Pickholtz cousins who might show up.

And I am speaking back home on 16 March, in Raanana. In English.
Posted by IsraelP at 5:59 AM