Last week, I looked at the Pickholtz-Bernstein family who came to the United States from Skalat in 1890. We do not have all the details of their first years in the US, but the main gap in the story is what happened to David Bernstein, who was eleven months old when the ship sailed.

This week, I want to have a closer look at the other two Skalat families who followed the Pickholtz-Bernstein family on the passenger manifest, almost consecutively.
You can see the actual manifest, but it is easier to work from the transcribed information presented here on the right.

I spent a morning looking at the JRI-Poland vital records for both the Kaczors and the Aberbuchs. (This was complicated by the fact that their "sounds-like" algorithm does not think that Aberbuch sounds like Auerbach, even though the same people are listed both ways.)

I'll spare you the details, but I did find two connections between Aberbuch and Kaczor. The more obvious (but perhaps less useful) is Nuchim Kaczor who married Lea Auerbach. They had six children in the period 1891-1901 in Podwoloczysk and in one of the birth records, Lea is identified as being from Skalat.  I don't see anything connecting them to anyone else in our story.

The other is Leiser Auerbach and his wife Zipore Goldstein. They had six children 1881-1888 in Zbarazh. In several of the records, Zipore (aka Cipre) is identified as being from Skalat. Zipore died in 1890 at age twenty-eight having buried four of her children at between six and thirteen months of age. 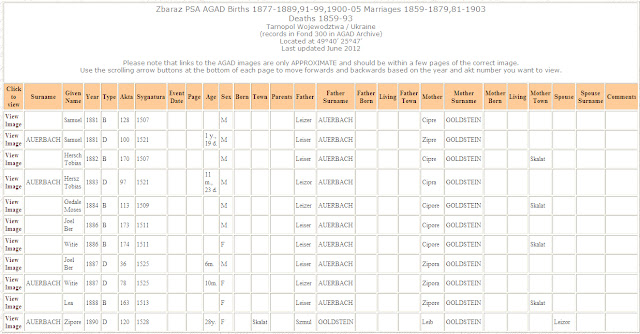 Here is the thing. Zipore Goldstein, the wife of Leiser Auerbach is the sister of Rifka Kaczor, the wife of Rachmiel from the passenger manifest.

I would not be surprised to find the widower Leiser Auerbach in the United States in the 1890s or early 1900s, but I have not really looked for him there.

I have no idea if Leiser is closely related to Aron from the passenger manifest, but if he is, it would not surprise me one bit.

I saw no connections between Aberbuch and either Pikholz or Bernstein.

The Kaczors of Skalat are a much bigger project. In fact, I know several people who are working on parts of that family - including a client of mine - but to my knowledge no one is looking at all the Skalat Kaczors in a single project.

I started with a search for "surname sounds like Kaczor" and "given name sounds like Rachmiel." There were thirty-six records in the Tarnopol area - twenty-nine in Skalat and one family of seven in Podwoloczysk. ("Sounds like Katcher" produced those same results.) There is nothing there that tells us anything about Rachmiel's parents, so unless someone dives into this on the American end - death or cemetery records, for instance - there is not much to do on that.

Searches for records which include both Kaczor and Bernstein come up empty and, of course, had there been and Kaczor-Pikholz connections, I would have been all over them long ago. (That said, I have a low priority interest, considering the possibilty that Kaczor, Kaczka and Kwoczka all come from a single source.)

So why is this any more than several families from the same place travelling together? Maybe it isn't. But still, let's see what else we have.

First of all, in discussions a few years ago, Lee Katcher, the late Norman Kotcher and Steve Pickholtz concluded that one of the Kaczors lived with Steve's grandfather while in school. I don't know the specifics - not even if he was from the family on the passenger list - but they felt thatthis was an indication of a family connection. Maybe. Or maybe it was just good friends from the old country.

Then there is a mortgage document in the names of "Berisz Pickholz and Sarah his wife, Rachmiel Katcher and Rochil his wife, [Heren?] Katcher and Catherine his wife and Bluma Barenstein." (Note that Rachmiel's wife was Rifka on all previous documents.) A second document is similar but does not include Bluma. They are identified as being from New York City. The documents are dated June and July 1890 and refer to land purchases in Pittsgrove New Jersey. Pittsgrove is just a couple of miles from alliance where Sarah was buried eighteen months later, so at least Berisch and Sarah must have actually lived there.

Here again, this joint mot\rtgage may be a sign that we are talking about family. Or maybe it was several Skalat families participating in the experiment that tried to make New Jersey farmers out of east European Jews. This plan is probably what put them on the same voyage. How long they remained farmers, who knows. Local Pittsgrove records probably can shed light on that period.

This is Steve's project, but perhaps someone reading this might have something to suggest. I for one have no experience with US land records. Nor do I have the time or inclination to acquire that experience at this time.

BERNSTEIN
This is a good time to make some additional Bernstein comments.
There are three researchers listed in the JewishGen family Finder doing this large family. Two of them seem to be active and I am in contact with one of them. Many of these Bernsteins - may all of them - are kohanim.

We have at least one other Pikholz connection in that Bernstein family. 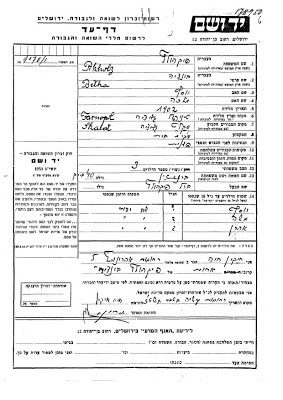 In 1955, a woman named Haya Henkin in Rehovoth submitted a Page of Testimony to Yad Vashem in memory of her sister Betka / Boncia Bernstein of Skalat, who was married to Berl Pikholz. They had three sons - Josef, Moshe and Aharon, all of whom were killed.

I spoke to Haya's daughter Malka on Kibbutz Saad, who also filed a Page of Testimony for Betka. She confirmed that this is the Bernstein family who are kohanim. She did not know anything about her Uncle Berl, so I do not know where he fits into our families.

Neither Haya nor the daughter knew the ages of the children.

Betka was born in 1902, so her husband could be one of several Berls we have who were born in that period. Perhaps we will know later on.
Posted by IsraelP at 7:30 AM