SO WHY NOT WRITE A LETTER TO THE NEWSPAPER? 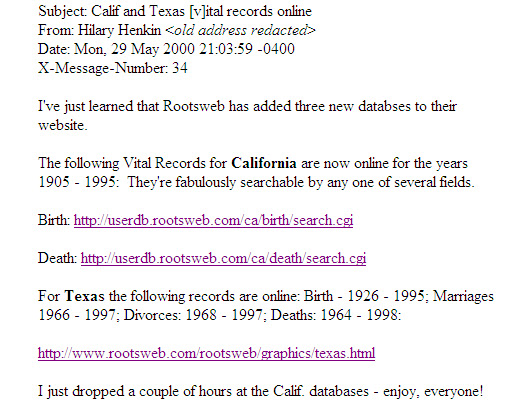 The Texas link is now elsewhere and the California birth index soon fell victim to privacy concerns, but they both worked back then, and the link to the California death index works to this day, up to 1997. 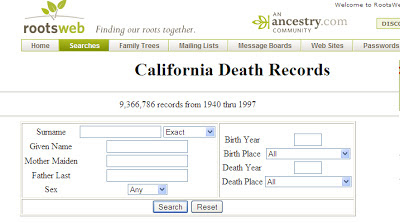 This is the way the search form looks today, essentially unchanged from thirteen years ago.

You can search by three different surnames - the deceased and both of the deceased's parents - so I immediately checked all three with different versions of Pikholz.

The search produced results for two people totally unknown to me, people born in places where I had not seen any Pikholz before.

The story of the Kaplans in Omaha sounded interesting, if fairly conventional, but the telling is for another time. A Pikholz descendant named Henrietta Rochester Evans from someplace in Missouri (St. Louis seemed likely) was completely off the charts and that's where my attention was drawn.

As I recall, at that time the 1900 and 1920 censuses were fully indexed, but not online. (1910 was indexed for only a few states.) So I asked my friend Carole Feinberg to see if Henrietta showed up in 1920 - either in California or in Missouri.

Carole came back to me with this:

Nellie Pickholtz, huh. Well, I certainly didn't have anyone by that name.

I did find a daughter for Henrietta in the death index and there seems to be a granddaughter, based on the no-longer-available birth index, but I have not succeeded in making contact.

I found Jacob Rochester, born 1907 in Missouri, in the California death index - no mother's name listed. But he matched the 1920 census. I found no children.

So Jacob and Henrietta were in California, but I saw no evidence of anyone else in the family. Of course, some of them - particularly Reuben and Nellie could have died before the death index begins in 1940.

So I went back to Kansas City and started by writing to the funeral home that handles most of the Jewish burials. Unfortunately nothing like Feldman's in Denver - I wrote and faxed several times but never received an answer. Meantime, I learned on JewishGen that a book with all the Jewish burials in Kansas City had been published and Maurine found me the single Rochester in the book - eight year old Abraham, who died in 1909. The others - particularly Reuben and Nellie were conspicuously missing.

Maurine checked the city directories and they disappear after 1923.

This was not a high-priority project and I worked on it sporadically. So much else to do. Such progress that there was came in fits and spurts.

In early 2002, someone suggested I put an ad in the Kansas City Jewish Chronicle, or perhaps write a letter to the editor. Well, that seemed pretty desperate. It had begun to look like they had all left town long enough ago that no one would remember them. But as my Aunt Betty says - if you don't ask, the answer is always "no." The 1930 census was not yet available, much less indexed, so I had no other good ideas.I don't seem to have a copy of my letter to the editor, but here is the response I received from Jeff on 9 March 2002:

I read your letter to the editor of the Kansas City Jewish Chronicle seeking information about descendants of Jacob and Nellie/Nettie Rochester. My wife's paternal grandmother was Frances Rochester; my wife's father was [name redactcted]. Frances lived in Kansas City with her family until her death in the mid 1950's. I am not sure Frances was related to Jacob and Nellie but I will investigate this. I assume you or a family member or friend is somehow related to the Rochester family. I'd be interested in knowing more.

Suddenly I had a lead.  Two days later, Jeff had more to report.


So the whole family went off to California in 1923 or 1924, but there was a married daughter who remained in Kansas City.

So back to California it was. I tried Lena, Mary and Ida using their given names and "Father's surname = Rochester." Mary showed up like this:

She had translated Pickholtz to Peckwood.

There was a death entry for an Ida born 1909, but nothing showing the parents. I also found that Ida had a daughter who died in 1982 and a son, whom I did not find. (Note to self - Have another go at that. And Henrietta's granddaughter, as well.)

I found nothing for Lina (or Lena), but Hilary checked a brides' index and found that Lina had married a second time - a man named Worthington. She too had no parents' names in the death index.

Eventually I found the deaths of Reuben and Nellie - in 1927 and 1931. Neither has a stone. But I did get to a proper death certificate for Nellie, with Mary Rose as the informant. Daughter Mary must have been married at least twice. 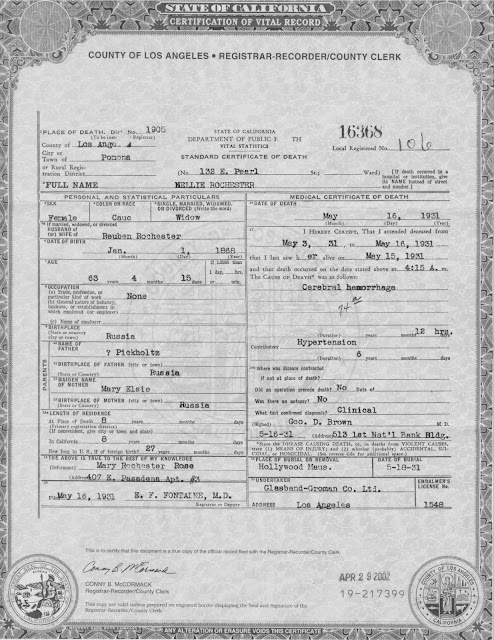 I took the 1868 birth year as an approximation. I wasn't sure about Russia, since the Pikholz families were all from Galicia. Father's name "? Pickholtz" - OK. Mother's name "Mary Elsie," obviously a back-translation. ("Mary, you are named after my mother...")

I found the graves for both Nellie and Reuben. Neither has parents' names or other identifying information on the stones. Neither has a stone.

In July 2003, I came up with a passenger manifest showing Nellie (called "Nese") and four children sailing from Southampton (UK) to New York in 1904, to meet husband/father Reufin Rochester in Kansas City. The four children were Morris, Fanny, Leah and Abraham. The two girls are obviously Frances and Lina and we have Abraham's Kansas City grave. Morris was a new one. He was not in the 1920 census, not in the grave book and not on Jeff's list. Nor did I see him in California. He was with the family in the 1910 census.

Soon after that, we received the1914 naturalization papers, which showed that he had been born in Bratslav in 1864 and she in Nemirow - both in Podolia. So Russia is correct. We had record of a Moshe Pickholz from Nemirow who sailed to England on his way to New York, but we never found him in either the US or UK. He may well be a brother of Nellie. Morris, Fannie and Lena were listed as having been born in Odessa.

The naturalization petition did not give Reuben's original surname or the name of the ship he travelled on, but he had said it sailed from Antwerp to Philadelphia in 1903, so that limited the possibilities. 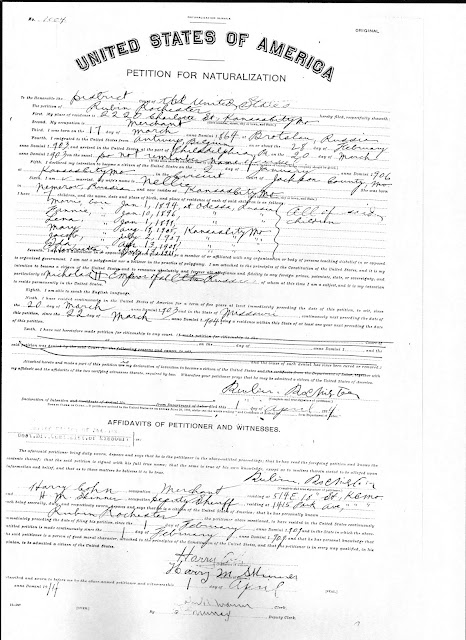 His name in the passenger list was Rackister (which we learned later was actually Rechister) and his last address was not England - where his wife and children were - but Odessa. There was a Pickholtz family in Philadelphia who had previously lived in Odessa, but that not whom he said he was going to. Reuben Rochester was going to a "cousin" Jankel Goldberg on Tasker Street, as was the next person on the passenger list - Jankel Braverman. I didn't find any significance to either of those names.

We have no idea what brought him to Kansas City.

I also found two other births - a son Chaim Gedalya was born in Odessa and apparently died there (we don't see him later) and a stillborn while the family was in London. The Odessa birth records had Nellie's name "Neche."

Recently we found Morris. He never married and died as Morris Davis at age fifty-nine in Kansas City.

So that's about where we are holding. We don't know who Nellie's parents are. We don't know why they went to Kansas City. Reuven and Nellie had seven children who grew to adulthood and apparently only five grandchildren. We have no graves for the four sisters in California.

But I have had the pleasure of making the email acquaintance of most of those six great-grandchildren in Kansas City, one of whom is participating in our DNA project.

And the key was finding the family who stayed behind in Kansas City - with the help of my letter to the editor.

The National Library on the Giv'at Ram campus of the Hebrew University is trying to learn more about genealogy, so as better to serve the general research community. As part of that effort, they have invited several genealogists - myself included - to make presentations to library staff, explaining what we do and what resources we use. Following that, they will show us some of the lesser-known resources that they can offer us.
Posted by IsraelP at 7:30 AM