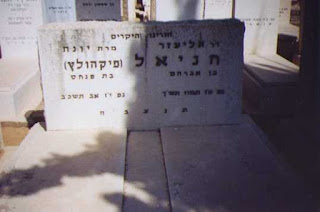 Dr. Eliezer Pikholz Haniel was the first Pikholz descendant we know of to make aliyah, to immigrate to Eretz Israel. He died fifty-three years ago this week - 13 Tammuz 5720* - and is buried in the journalists section of Kiryat Shaul in Tel-Aviv.

My father's third cousin, he was born in Kopicienice (east Galicia) 20* May 1880 to Avraham Grunfeld and Gittel* Riwke Pikholz, the daughter of Eliezer and Chana-Chaya Pikholz of Skalat. His mother died when he was four and it is not clear whether he was raised by his father and step-mother or if perhaps he went to his mother's family in Skalat.﻿
﻿He studied agronomy in Vienna with the intention of using his skills and education to further the cause of Jewish settlement in Eretz Israel and in 1910 was invited by Dr. Arthur Ruppin and the Keren Kayemet (Jewish National Fund) to serve as the agronomist for the Hulda and Ben Shemen forests. During that period, he lived in Ben Shemen.

As a well was being dug in Kibbutz Hulda in 1911, some unusal samples of earth turned up about fifty meters underground and after performing some experiments, Dr. Pikholz concluded that they had found oil. The Austrian Geological Institute confirmed his findings.

Dr. Ruppin was approached about developing this resource and he supposedly denied any possibility of oil in Hulda, saying that if the Turks thought there was oil, they would never leave.

He soon left the KKL and moved to Petah Tikva, where he ran an agricultural school. The school was closed down during the war years, partly because the foreign students were no longer able to receive support from their parents in Europe. It reopened in 1920.

In the interim, Dr. Pikholz served on the steering committee for the war against the locust invasion of 1914 and he was arrested several times by the Turks for contact with the underground,  anti-Turkish organization Nili. (His daughter was not sure if he in fact had been involved with Nili.) In 1918 he married Yonah Soroker of Petah Tikva, with whom he had two daughters. In 1923, he changed his surname to Haniel, perhaps in memory of his maternal grandparents Chana and Eliezer - but he continued to be known as Pikholz.

But foremost in his mind was the school and his students, even during the war years when the school itself was closed. His great-grandson Or wrote the following for a school project. (He refers to his great-grandfather as "grandfather.") Translation from Hebrew is mine.

Background for "the initiative"
While he was principal of the agricultural school during WWI, Grandfather took an unforgettable initiative, which was later recounted in the memoirs of two of his students who married and lived on Kibbutz Ein Harod. This is the background for "the initiative."  In 1911 Grandfather had set up an agricultural high school.  This school was in the Jewish moshava Petah Tiqva and brought an agricultural high school education to the children of farmers, age fourteen and up.
This school had some important advantages.  The students were able to continue living in the moshava and could help their families with the workload without having to travel to school at the distant Tel-Aviv Gymnasium or in Mikve Israel.  In addition to the students from the moshava, there were some twenty students who had been sent by their wealthy parents abroad to live and study in Eretz Israel. There was much hope for the future of the school but suddenly WWI broke out in 1914.  The first to suffer were the students from abroad who were no longer able to maintain contact with their parents and were left without means of support.

The war between Turkey and Britain became fiercer.  Many people  were deported because they were Russian citizens.  Those who remained were required to take Ottoman citizenship and to be drafted into the Turkish army.  Many went by sea to Egypt were they waited out the war as refugees.  One of the farmers gathered the foreign students and urged them to leave for Egypt where perhaps the Jewish and Zionist institutions would care for them.  The students accepted the farmer's advice, collected their belongings and headed for Jaffa Port.

"The Initiative"
As the students were walking towards Jaffa Port, a carriage came in the opposite directon carrying their teacher and principal, Dr. Pikholz, on his way to Petah Tiqva.  He stopped and asked the students what was going on and when they told him he said," No one is going anywhere."  He ordered them to return and said," Don't worry, we will take care of you.  If we have to suffer, we shall suffer together and whatever happens will happen to all of us."

Upon their return to the moshava, Grandfather had to find ways to support these students who had lost contact with their parents.  Since the students were young and inexperienced, it was difficult to find work for them.  Grandfather convinced some farmers to give work to the boys in exchange for food - food that was no more than oranges.  Grandfather also found temporary work for some of the boys at the JNF farms at Ben-Shemen and Hulda.
In addition, in order to contribute to their own nutrition - during the famine - the students began planting rows of their own vegetables, such as tomatoes and cucumbers.

Grandfather, who was very concerned for the students, was a man of initiative and began collecting small donations from the farmers and set up a restaurant-like "kitchen" for his unfortunate students.  As a result of Grandfather's works, the students survived the war, the hardships and the disease that were the lot of everyone here in Eretz Israel.

I met with one of Dr. Pikholz' daughters a few years before she died and she told me that he suffered greatly from the discrimination of the socialist Bolshevik domination of the various Zionist enterprises. His refusal to toe the political line of the "ruling class" cost him in employment and promotion, in housing, in access to health care and more. He knew that would happen, but he had his principles. This was apparently typical of the stories of many of the east Galicianers.

In 1968, Zeev Salat, one of Eliezer Pikholz Haniel's three grandsons, was killed at the Suez Canal when his patrol jeep went over a mine. He too is buried in Kiryat Shaul.


﻿* There seems to be conflicting documentation on several points. I have used 13 Tammuz as the date of death, based on the death certificate. His gravestone and other documents say 15 Tammuz. My guess is that he died Friday and was buried Sunday and that the gravestone and other documents reflect the date of burial.
There are also alternate birth dates and even a variation on his mother's name, but since I am the genealogist and have the birth record, I am using what I have determined to be correct.