Part one of two

(Parts of this appeared in The Galizianer - published by Gesher Galicia - in February 2006. We have learned a bit since, but not nearly as much as we would have liked.)

It must have been early 1999 - soon after the inception of the Pikholz Project - when Steve Pickholtz and I came into contact with one another by email and now, fourteen years later, it seems that his family and mine are the only ones we haven't been able to take beyond the names on our great-grandfathers' graves.  We know now that both our families came from Skalat, where the mother lode of Pikholz families resided, so we assume we are both part of what we have come to call "the eastern branch."  (The smaller, "western branch" was centered in Rozdol.)

Steve has become the most active of the Pikholz researchers among those family members in the US, while I continue to coordinate the project from here in Israel.  But I get ahead of myself.
Steve was born in Philadelphia in 1945, to Morris Pickholtz (1903-1970) who was also born in Philadelphia.  Steve "knew" that his grandfather was Harry and that he had been an orphan who came to the US alone, but in census records we found Harry living with his parents into young adulthood.  So much for that particular oral tradition.

After a round of basic inquiry, it started out looking pretty straightforward.  Bernard (Berl/Berisch) Pickholtz and his wife Bluma (Bernstein) lived in Philadelphia, as did their children Olga Mandelkern, Harry Pickholtz, Anna Tersuhow and Fanny Pickholtz (who had no children and returned informally to her maiden name after divorce).  They were born in the 1870's-early 1880's, according to various later testimonies.  In the 1900 census, we have Bernard and Bluma with children Harry, Annie and Fanny.  Olga was married by then.

Steve collected the six death certificates and visited the graves and here is a summary.

The bit about Fannie's mother's being Sarah Bernstein was odd, but we chalked it up to a double name, even though Bluma's grave didn't indicate any such thing.  However the informant was her sister Anna, who surely knew what she was talking about.

The informants for Olga, Harry and Anna were their US-born sons who clearly did not know all the family history.

Bernard's father Moshe Zvi was interesting, but it didn't tell us much as we have this combination in a number of families where the name does not appear to have a common source.  (My own father's brother is Moshe Zvi, named for his two grandfathers.)

Based on the birthplace on Fannie's death certificate, Steve ordered a search of Odessa birth records for Pikholz and two turned up -  Fannie born in 1881 and Vodolya in 1883, both to Austrian citizens Bor and Sara Pikholz.  We never see a trace of Vodolya again (not as Vladimir, William, Wolf, Zeev etc), but neither do we find a matching child's death record or grave.  Clearly none of the other children of this family were born in Odessa, as the search request included them by names and ages.

Soon after, Steve came up with a passenger list, from 1890, which included the following consecutive listings (names and ages), all travelling from the east Galician town Skalat. And right after them, two other families from Skalat. The ship was bound for Baltimore. 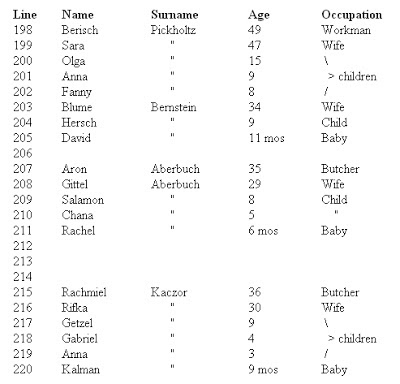 Sara and Blume are obviously two different people. How did both come to be married to Berisch?

Blume - who has two sons - is going by Bernstein, which we thought was her maiden name. There is a Bernstein family in Skalat who are kohanim, so perhaps Bernstein is Blume's maiden name. In which case, who is the father of her children?

One of Blume children is Hersch, who would be Steve's grandfather. And who is this baby David, who appears nowhere else.

It is of some note that Berisch and Sara are listed as coming from Skalat, not Odessa, so they must have returned there, at least briefly.

And is there a connection to the Kaczor and Aberbuch families? There are a few Awerbachs in Skalat, but no couple named either Aron or Gittel. There are a few hundred Kaczors in Skalat, including one Rachmiel married to a Rifka Goldstein. They indeed had sons Getzel and Gabriel, so those are probably the family that travelled with Berisch and family.

The scenario we began to see went something like this:

Some time later, Steve found Sara's grave. In Alliance New Jersey, where an attempt had been made to establish communities of Jewish immigrant farmers.

Sara died 1 January 1892, less than two years after arriving from Europe. She is clearly identified on the stone as the wife of Dov (=Berisch) Pickholtz and the daughter of Mordecai HaKohen. So she is indeed Blume's sister.


Then we considered who might be Harry's father.  I examined the JRI-Poland birth index for Skalat and found two births to Bluhme Bernstein.  One is Moses-Hersch born 1878, with no father listed.  (There were many births with no father's name in Skalat during that period, probably due to some mistaken policy of the registrar.)   The other is Zalman Hillel (1876) and the father is Judel Mendil Werfel.  Eight months later is a death record for Salomon Hillel Werfel, son of Juda Mendel.  In both of these birth records, Bluhme's father is Markus (=Mordecai) Bernstein and in the case of Moses Hersch, Bluhme's mother is called Rachel.  We find no record of either David's birth or Juda Mendel's death, but the family may have lived elsewhere at the time.

If all this is true, then Harry Pickholtz was Moses-Hersch Werfel - Moses-Hersch being the same name as the father of Harry's uncle/step-father, a fact which I am not assuming to be significant.

We have yet to find a trace of David, not in New Jersey and not in Philadelphia. Not as Bernstein, not as Pickholtz, not even as Werfel. Considering that David is a dozen years younger that Hersch, he may be from some other family entirely and just raveelled with Blume for some unknown reason. (Steve is more concerned about finding him than I am, which is quite understandable.)

There is one other open question regarding Berisch's children - where were Olga and Anna born? There are no records either in Odessa or in Skalat. Perhaps they spent some time in Podolia before arriving in Odessa.

There is also the matter of the Kaczors and the Aberbachs. I hope to address that next week.


Some time ago, a woman in Baltimore asked me to order records for her from the AGAD archives in Warsaw. When they arrived (paper copies), she claimed that she didn't know she had to pay for them - and in any case, she didn't gve me a mailing address. Last week, after three years, I threw them out.

Last week, without fanfare - except a Facebook post - I marked the anniversary of my aliyah. I have now been living in Israel for forty years.