SEMINAR AT THE NATIONAL LIBRARY

A DAY AT THE LIBRARY
I spent a day at the National Library, on the Givat Ram campus of the Hebrew University, the week before last. The library staff, particularly Mrs. Elona Avinezer, the Head of the Judaica Reading Room, want to better serve visitors who come with genealogy questions, so they invited several genealogists to give talks to the staff about what we do and how we do it.

We had the whole morning, from about nine o'clock until nearly one. I was the last of the morning presenters and I did a case study of the family of Peretz Pikholz of Skalat. I wanted to touch briefly on a large number of sources, ending up with a non-document that moved our main question from "beyond a reasonable doubt" to "beyond a shadow of doubt." As time was running out, I tacked on a bonus conclusion about the next generation up, even though the supporting evidence is far from conclusive.

After a break to visit the cafeteria, we had several presentations by library staff about resources that they thought we may not have known about. We finished up at about a quarter past five.

The whole program was generally well-received by the forty-fifty participants. It was open to the public, though it did not get much publicity.

A few things that I learned. Irit Shem-Tov, of the Israel Genealogical Society, discussed the notion of family numbers. These numbers were assigned to a family unit and remained with it no matter where they went. Irit was mostly interested in Lwow, but this idea is relevant to Hungarian research as well.

Professor Yitzhak Kerem is a Sephardic researcher and it would not be much of an exaggeration to say that he seems to find Sephardim every place you look, even in Ashkenazic communities. I spoke with him afterwards about the Scharf family tradition that Shimshon Scharf (who married Bassie Ruchel, the daughter of Peretz Pikholz) was in fact a Turkish Jew named Arak. I gave our Scharf-Pikholz researcher his address and perhaps he'll be able to help out with that.

I also spoke to him about the theory that our Pikholz family might have come from Vyskovo (then Hungary, now sub-Carpathian Ukraine) where there were some minor Hungarian land-owning nobility named Pikholcz. The idea here is that our family were living on their land and when required to take surnames, too the name of the landowner - as happened with for instance many of the newly-freed slaves in the United States. Kerem thought that made perfectly good sense and as I type these words I realize that can solve another problem that has been nagging me for the last ten years and has been aggravated by our latest DNA results. Finding actual evidence, however, is another matter entirely.

Shalom Bronstein gave a better idea about what is actually going on with the Paul Jacobi Archives, a subject which until now has generated much talk.

Gil Weissblei of the library staff spoke about a number of lesser-known collections. I was intrigued by the David Tidhar collection. Tidhar published a nineteen-volume set (in Hebrew) called "The Encyclopedia of the Founders and Builders of Israel" which has some 6000 brief biographies of Israeli personalities in the years leading up to 1960. It turns out that Tidhar had sent questionnaires to all these people and those questionnaires are available for research at the National Library. I imagine that they contain information which was not included in the completed work. Tidhar was also a private detective and his files from that work are also in the Library's collection.

I have an article in the next issue of Avotaynu. I have not seen the final version yet, but I assume the title "GETTING IT WRONG" will remain intact. The article is about being careful about possibly recording incorrect information and how such information is likely to cause damage later on. That has been a mantra of mine of late.

I sat down a few days ago to look at my presentation for the conference in Boston, four weeks from now. I knew it needed a bit of reworking and updating since I last gave the talk six months ago. What I had forgotten until now is that the entire Power Point presentation is in Hebrew, so I have to redo the whole thing.

Barbara Stern Mannlein has graciously agreed to introduce my talk at the conference.

I have approached a large number of Pikholz descendants about DNA testing lately, prompted by the company's $99 sale on Family Finder (autosomal) tests. Some ordered kits immediately. No one said "no." Most are either ignoring me or thinking about it. The sale lasts until 25 July. 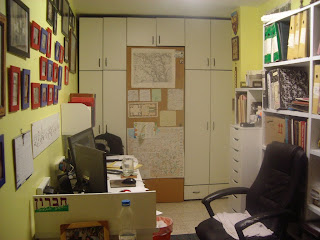 A couple of months ago, I wrote about redoing my office. Here are some photos of the more-or-less finished product. 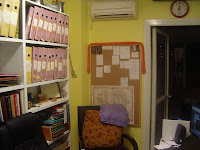 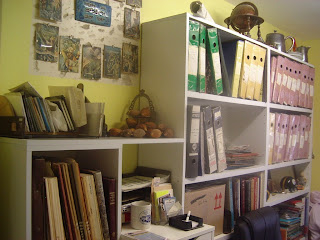 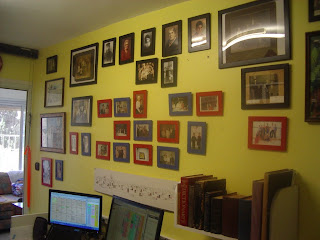 ﻿
Curse you, Blogger, for not leaving these images where I put them!