THE NINTH OF AV
Another year and another day of mourning for our lost Temple and sovereignty. This is not just history. It's not only mostly history. This is now.

The Talmud teaches "Any generation in which the Temple is not built, it is as if it had been destroyed in their times" (Yerushalmi, Yoma 1a)

But it is even more than that.

And I am not even talking about the fact that our own government used our own Jewish soldiers and police to evict some 8600 Jews from their legally-held homes, destroyed synagogues and uprooted a cemetery - only eight years ago a few days after we had mourned our earlier destructions. 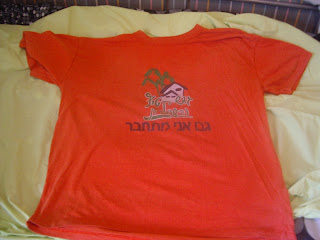 The Temple remains destroyed and our own authorities are ensuring that it remains inaccessible, even though it is permissible by law


Jewish worshippers hoping to ascend the Temple Mount in commemoration of Tisha B'Av were bitterly disappointed as, once again, police prevented them from ascending.

The hundreds of Jewish worshippers who waited Tuesday morning to enter the Temple Mount were turned away by the Jerusalem Police, who informed them that the district commander had ruled that entry to the Mount is forbidden to Jews.
The group included Members of Knesset Shuli Mualem-Rafaeli (Bayit Yehudi) and Deputy Foreign Minister Ze'ev Elkin (Likud). Several yeshivot (religious academies) were present as well.

Police spokesman Micky Rosenfeld said in a statement that after "security assessments" the decision was made "to close the Temple Mount to all visitors, in order to prevent disturbances."

However, it appeared that only non-Muslim visitors were included in that decision.

And as far as sovereignty is concerned, on this very day we hear,


[The European Union directive] also requires that any contracts between EU member countries and Israel henceforth include a clause stating that East Jerusalem and the West Bank are not part of the State of Israel, a senior Israeli official told Haaretz

So we have no Temple and our own government will not let us visit the place because they have been threatened with mob violence.

And the Europeans who failed to kill us seventy years ago threaten us again, this time with demands on our sovereignty., We have much to mourn. Today.

This trip divides into three - the genealogy conference in Boston, seeing family in several; different places and the bar mitzvah of my grandson in Chicago. That is similar to the structure of my trip two years ago, which also began with a conference and featured a Chicago-area bar mitzvah.

A few bits are still vague, but for those who are interested, here is the plan, laid out in one place.

I arrive in Boston the Thursday afternoon before the conference and will be staying in Brookline until Sunday morning. (A neighbor of mine who used to live in Boston set me up with a family in Brookline for Shabbat.)

The conference program has as many as eight lectures going on at once from Sunday morning until Friday noon. I am speaking Tuesday at five and will be on a panel Wednesday at three-thirty.

My lecture "A DNA Skeptic Turns His Family On Its Head - And Remains A Skeptic" is not my first at one of these conferences, but it's the first that is scheduled after the conference has actually begun. (The others were early Sunday, when most people hadn't yet arrived.) It may make for a bigger crowd.

The lecture description is thus:

As a genealogy research tool, DNA is very tempting because it tests the scientific genealogical makeup of possible family members, but at the same time uses analysis based on statistics and probability that can lead to incorrect or unfounded conclusions. The experts' explanations often confuse more than they illuminate, especially when you consider that some of these experts are the ones selling the testing services. So what is the lay researcher to do?

This talk will tell the story of one researcher, strictly a layman, who – despite his skepticism – used DNA testing to turn his basic family structure on its head, with more plans on the way. And despite his intentions to continue with this kind of research, remains something of a skeptic.


I'll be introduced by Barbara Stern Mannlein, a member of the Wachs family to whom I once thought we were closely related. The lecture is an hour plus fifteen minutes for questions.

As readers of this blog know, DNA has become an important part of my research tool-kit and we have quite a few Pikholz family members who are now testing. In fact, there are several DNA lectures planned and I hope to learn how to more fully use the results of these tests.

The sessions I certainly intend to attend are
All of these are sponsored by the testing company we use, family Tree DNA and the first two will be presented by their president.

On Wednesday I will be one of eight panel members for "Ask the International Archival Experts," each prepared to answer questions about archives in different countries.


I may or may not catch the first Friday lecture, as I am flying to Miami after the conference.

Travelling and Visiting
I will be in Miami from Friday afternoon until early Tuesday, spending Shabbat in Boca Raton. (I was in Florida only once before and then only as far south as Gainesville.) The purpose of this part of the trip is two-fold - I want to visit with some of the Pikholz descendants and to visit some Pikholz graves.

The cemeteries are Lakeside (Miami), Palm Memorial (Sarasota, Eternal Light (Boynton Beach) and Menorah Gardens (North Palm Beach, Fort Lauderdale and Weston). That's twenty-four graves altogether and I hope I get to them all. (I'll be with a rental car.)

Thus far, I am meeting with a Skalat Pikholz Sunday morning and one of the Rozdol Pikholz is trying to put together a group of cousins for Monday morning. Then another Skalater Monday late afternoon.

The most important part of the visit will be to see my father's cousin Herb, with whom I have been in correspondence the last few years. he is the oldest left of my father's family and our only previous meeting was when I was fourteen.


Next stop is Baltimore, again picking up a rental car. My grandsons Yaakov Meir and Avrohom are in yeshiva, one in Philadelphia and one in Baltimore, and they will already have started the new term by the time I get to Chicago, so I decided to see them in school. I plan to see Avrohom Tuesday and Yaakov Meir Wednesday.

I am staying both nights with Uncle Bob and Ro in their house in the woods and will see my cousin Beverly Wednesday morning and my cousin Chevy Thursday morning. I look forward to seeing Jerry & Marcia and the kids and anyone else who comes to the house Tuesday evening.

Thursday ends at Greyhound where I take a bus to Pittsburgh, arriving Thursday evening.

That weekend I'll be with Aunt Betty and Uncle Ken. I may be reading the Torah Shabbat at the Poale Zedeck.


Sunday I have an overnight bus to Indianapolis, but with an important stop in Columbus. It's at 10:30 PM and less than an hour, but my young cousin Merissa and I plan to get together at Greyhound. Merissa is critical to all my genealogy research, because she is the one who pushed my into doing it twenty years ago at Nana's ninetieth birthday party. Actually, that is the one and only time Merissa and I have met. She was not ten years old at the time.

The bus trip ends at 2:30 AM in Indianapolis and my son Eliezer will pick me up there for a day with him, Naomi and Noga in Bloomington.


From there it is back to Indianapolis Tuesday morning and a bus to Chicago, where my son Yerachmiel will pick me up at Greyhound downtown. They have just moved from Buffalo Grove to West Rogers Park, which among other things means they are no longer a ten minute walk from my sister Amy. I am leaving it to all of them to figure out the logistics of seeing everyone.

Shlomo Zalman's birthday is that week and they'll be having some kind of a Shabbat bar mitzvah, though the official bar mitzvah will be during the holidays so the older boys can be there.

I hope to continue blogging during my trip, but perhaps in a shorter format.
Posted by IsraelP at 7:30 AM