Buried With Her Great-Aunt

A few days ago, a question was asked on the Facebook group Tracing The Tribe about burials of very young babies.

The question was general in nature, without mention of time or place.
There were many replies in the comments, some anecdotal from personal family experience, some mentioning traditional Jewish practices at different times and places, some with mentions of Jewish law.

We have a Pikholz case like this and I chimed in:

This is the grave I referred to.

Joseph and Katie Pickholtz had four children, later known as Pickford. (I have mentioned this family before, most recently here.) Several of them are buried in Montefiore Cemetery in Philadelphia, in a plot belonging to the Deitelbaum family. Lillian Deitelbaum is the wife of Joseph's elder son Sam Pickford.

Among those in that plot is Joseph and Katie's daughter Ida Brown, who died in 1938 at age thirty-five after a very difficult life.

When I visited Montefiore Cemetery the first time, the cemetery office mentioned that there is an unnamed baby girl buried with Ida. The baby had died sometime in 1940 and I learned further that she is the daughter of Sam Pickford's older son.

Hence my response to the Facebook question. But while writing that response, it occurred to me that I had never looked for this baby among the Pennsylvania Death Certificates that Ancestry had acquired a few years ago. Initially, they posted death certificates for 1906-1963 and they have since added 1964-66.

I searched Surname=Pickford and Death year=1940 and there it was.

with a link to the original death certificate. 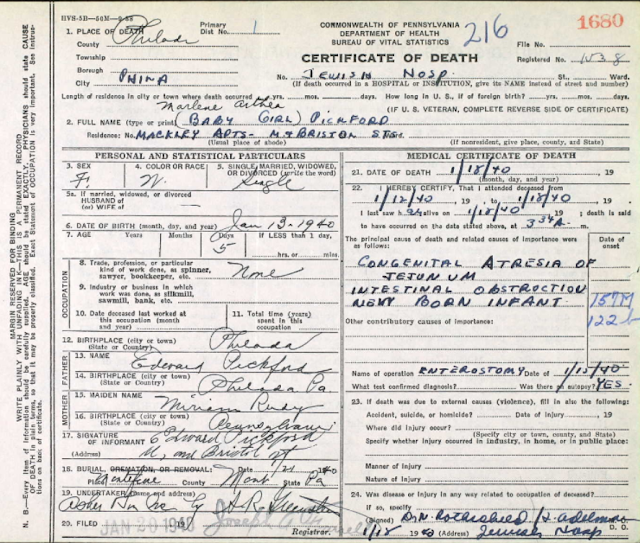 The baby had a name - Marlene - with a middle name that looks like Arther. Together with dates of birth and death. She lived for five days. The doctor attended to her beginning the day before she was born. The parents are who we know them to be.

The baby's name is in a different hand and appears to have been added to the certificate later.


BEYOND A REASONABLE DOUBT


What We Know vs. What We Can Prove
Posted by IsraelP at 5:37 AM