New records from AGAD
About two weeks ago, Mark Halpern of JRI-Poland posted the following, in reference to records from east Galician towns in the AGAD archives in Warsaw.

Some of these towns are of interest to my Pikholz families and my Kwoczkas lived in Zalozce, but many of our families had left their home towns by the time we get to these records. There are some records that add a bit of information, but not much of real significance

But in Podwoloczysk, there are six records of interest, some answers and some raising new questions. (I keep expecting that new records will only provide answers, but no.)

1. The Kiwetz marriage
Tema Pikholz and Zvi Kiwetz, of Skalat, had twelve children almost all of whom lived into adulthood. Of those, only their son Yitzhak survived the Holocaust, losing his wife and three children. Another Holocaust survivor is the daughter of his brother Chaim and eventually that daughter was brought up by Yitzhak and his second wife in Haifa. The daughter was born in 1939 and I have met her, though the last time I looked for her I was not able to find her.

The new Podwoloczysk include her parents' marriage. We know them to be Chaim Kiwetz and Pinie Podhorcer, a variation of Podhoretz. She told me that her mother's mother was also a Kiwetz, a relative of her father.

In fact she is incorrect. Her mother Pinie Podhorcer is the daughter of Menachem Kiwetz and Ester Podhorcer. Her parents' fathers are brothers.

2. There are Picks in Zbarazh
When I first began looking at AGAD records nearly twenty years ago, I saw a Zbarazh couple Lewi and Malka Dwojre Pick with two children born in the 1850s. At the time, I had no idea if this Pick (sometimes Pik) family was part of the Pikholz family of Skalat so I recorded what I found. Soon enough I became convinced that this is not our family but I continue carrying them in my database. There are a few others as well, who probably fit together, but I have not put any work into this family.

I have not found any of them alive during or after the Holocaust, but frankly I have never really looked.

The new Podwoloczysk records include a marriage of a younger member of the Pick family - Israel Jakob Kahane born to Reisel Pick and her husband Nuchim Kahane in 1899. This is the youngest member of this family that I have run across. 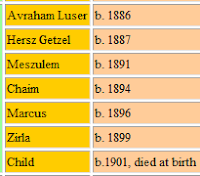 Josef Pikholz of Klimkowce (the grandson of Nachman Pikholz of Skalat) who has been mentioned here from time to time, lost his wife Lane Feldman in 1885 at age thirty-two. Soon after, he married his first cousin Sure Elka Pikholz and we have birth records of the children they had together. We know nothing about any of them. (These are half brothers of Jacob Laor's grandfather.)

The new Podwoloczysk records include a 1926 marriage for Chaim. I have suggested to Jacob that he have a look at the Yad Vashem records to see if any of Chaim's family are listed under his wife's surname.

4. The death of Syma Pikholz
Josef's father Arie Leib (1829-1901) also lost his wife in 1885 and afterwards he married a woman named Syma Friedmann. They had a son Nachman David in 1891, about whom we know nothing. Jacob wondered not long ago whatever happened to Syma. We now have her death record; she died in 1920 at age seventy.

5. Is this our Chana?
The Podwoloczysk records have a 1920 death for Chana Halpern.  The record does not identify her parents or her husband or her house number or her home town but she appears to be the daughter of Gabriel (the son of Nachman) and Sara Pikholz of Husiatyn, the wife of Joel Halpern. Her age on the death record is 64 which means she was born about 1856.

The problem is that our Chana's father Gabriel died in 1852. So either this is not our Chana or the age on the death record is incorrect. For now, I am not going to attach this death record to our Chana, but I shall make a note that it might be our Chana with an incorrect age.

6. Brane's husband
This is the most problematic of the new records, so let me start with a bit of background. Chana Pikholz, whom I just mentioned above, and her husband Joel Halpern had a daughter Brane on 13 January 1893 in Podwoloczysk.

In 1919, Brane had a son in Vienna. On the birth record she is identified unambiguously by her known birthplace and birth date. The father is not named.

That son, who went by Pickholz, ended up in Israel and I have visited his grave. The tombstone has the correct date of birth but the wrong year and identifies his father as Avraham. He has three children, all in Israel, who flat out refuse to talk to me - other than to say "We are not from Galicia. We are from Vienna!" If they would talk to me, I would ask about the identity and surname of Avraham, whether there were additional children, when their father came to Israel, what happened to Brane and more.

Be that as it may, the story seems clear. Brane was born in Podwoloczysk, went to Vienna, married Avraham and had a son in 1919.

But the new record in Podwoloczysk throws a monkey wrench into all of that.
On 29 September 1922, a Friday three days before Yom Kippur, in Podwoloczysk Brane Halpern the daughter of Joel Halpern and Chancie Pickholz, married Isak Siegel, the son of Chaim and Hinde Siegel. Brane's birth date is as we know it and Isak is a few months younger. (This is not the Isak Siegel of Bredowicz who is a Pikholz descendant himself.)

There is no mention in the record of her having been married previously or of her living in Vienna.

Perhaps there is an error someplace, though I cannot imagine where it might be. Might Isak and Avraham be the same person with a double name? I doubt it. What else might explain the documents?

Perhaps she didn't live in Vienna but went there to deliver her child, a child who did not have the benefit of married parents. Then she came home, married and returned to Vienna. Perhaps I should be looking in Vienna for Brane and Isak Siegel - maybe with additional children.