A Story From The Neighborhood

Last week I was doing some work for a client involving - among other things - the family of a woman who died in 1953. This is not basically a Pittsburgh case, but this particular woman lived in Pittsburgh most of her adult life. About ten minutes walk from Chez Pickholtz.

Pittsburgh is a relatively easy place to do Jewish research. Ancestry has Pennsylvania death certificates for 1906-1966 and adds more every couple of years.

Carnegie Mellon University has The Pittsburgh Jewish Newspaper Project.
And the Rauh Jewish Archives at the Senator John Heinz History Center has burial records from seventy-eight local Jewish cemeteries, updated to 2009. In an inquiry this week, I learned that they "hope to do an update in the next few years, although the project is still in the planning phases, at the moment." 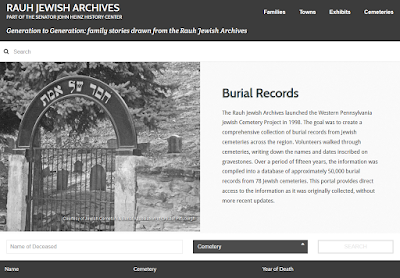 The combination of these three resources can be an extraordinary aid in Pittsburgh-area research, in addition to the standard sources such as census records, Social Security Death Index, immigration and military records.

I learned easily enough that the family of the woman I was interested in were active Tree of Life people. She and her husband are buried there, as are her sister and brother (who married a brother and sister). The home she shared with her husband and her married daughter is less than ten minutes walk from Tree of Life.

She and her husband had two daughters. One predeceased both of them and is buried at Tree of Life, as would be expected.

The other daughter was married and at some point they became affiliated with Beth Shalom, a Conservative congregation, much like Tree of Life, but about twice as far in the other direction. They are buried in the Beth Shalom cemetery. I see nothing that indicates that the husband had a prior affiliation with Beth Shalom, nor did the Rabbi's Assistant there find anything about his wider family. The husband's obituary names a sister who lived in Philadelphia. so perhaps he was not from a local family.

I wondered when and why they joined Beth Shalom. And I was not sure why this question bothered me.

The married daughter and her husband had one son, who died in his twenties, during the lifetime of his grandmother. In the course of my search, I saw the son's bar mitzvah announcement in the Criterion. At Beth Shalom. They were apparently there a long time. I wondered why. Not that it mattered.

I looked at the rest of the page and I saw that another boy was celebrating his bar mitzvah at the Tree of Life that same week. Maybe the fact that the date was taken was what brought them to Beth Shalom.

But the date wasn't taken by just a random Jewish boy from the neighborhood. The date was taken by the only non-relative I ever called "Uncle." (And his wife, also a non-relative, was one of two we called "Aunt.") I guess I was meant to know that.

European Jews have always married mainly within the tribe. Whether our numbers five hundred years ago in Europe were four hundred or four hundred thousand, the pool was limited. As a result, the members of the tribe today are all related to one another, multiple times.  This phenomenon, known as endogamy, makes Jewish genetic genealogy very difficult, often impossible. There is a similar phenomenon in some other population groups.
I was convinced that this brick wall is not as impenetrable as it seems, at least in some circumstances.

It is my hope that this book will encourage and inspire other researchers of their European Jewish families and other endogamous populations to say “I can do this!”
Posted by IsraelP at 7:10 PM