A few weeks ago, Beth Long - Hungarian researcher extraordinaire - asked me to join a project she was working on regarding a woman born during the Holocaust but has no idea who her parents are. More on this another time, perhaps with a guest blog by Beth herself.

But there is one corner of this project which warrants a spotlight now. One of my favorite soapboxes.

The woman - we'll call her the Holocaust Baby - did a DNA test at Ancestry and uploaded her results to GEDmatch where she found a number of matches of interest. Two of those - male first cousins to one another - match her in the 220-260 cM range. (All the DNA information cited here is based on GEDmatch on-to-one searches with the standard threshold of 7 cM. These do not include the X chromosome.) That is second cousin territory.

A third first cousin tested and his match is 336 cM.

There are several segments where these three cousins match the Holocaust Baby, particularly on chromosomes 7 and 8. 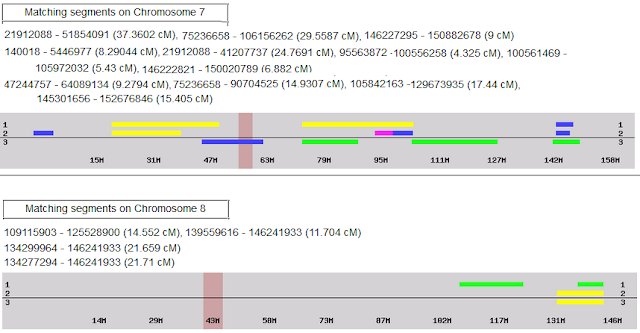 The connection with the Holocaust Baby must be on their grandmother's side. Beth built trees and went after the relatives. 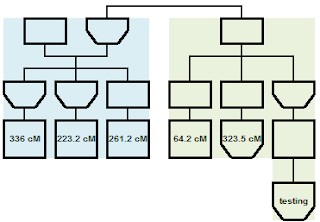 The grandmother had a brother (green) and two of his grandchildren tested. One matches with 323 cM, also second cousin territory.

A second cousin once removed of the original three testers (in blue) is in the testing process.


The grandmother had a sister (pink) with a living grandson from her first husband and two great-grandchildren from her second. They would be second cousins and second cousins once removed to the original blue testers. 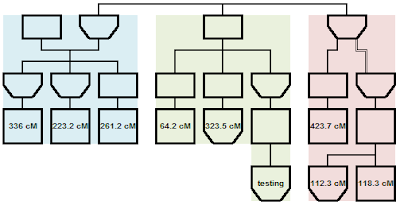 Here too, the sizes of the matches point to an as-yet-unidentified sibling of the blue grandmother, though 423 cM is high for a second cousin. But of course these Jewish families are subject to the vagaries of endogamy, where people are related multiple ways.

We have proceded beyond this and results there are not in, but that is not the point of this article. The green second cousin with the 64.2 cM match is way out of line with everyone else. I expected that he is not really a second cousin. The genetic father (or grandfather) is not who he is supposed to be.

But that is simple enough to confirm. We compared the 64.2 cM cousin to the rest of his known cousins, his green close cousins and the blue and pink second cousins.. 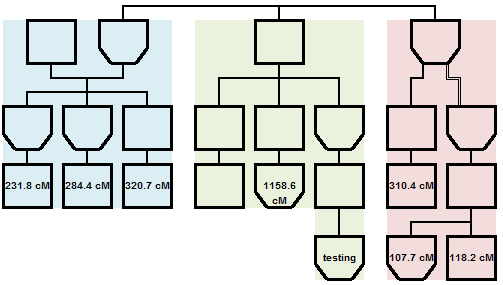 At 64.2 cM he may not look like a second cousin to the Holocaust Baby, but he matches everyone else quite well. He has a particularly large match with his first cousin, at 1158.6 cM. So there is no misattributed paternity here. This man is a second cousin to the Holocaust Baby - at least as much of one as the the others with the "normal" matches..

64.2 cM is way below the expected 213 cM for second cousins. It is below the 95th percentile which goes as low as 99 cM. Note that the pink cousin who matches the Holocaust Baby with 423 cM is also outside the 95th percentile, but in the other direction. And these two match each other within the norm.

So the lesson here is that norms are just that - norms. The ninety-fifth percentile still excludes five percent and five percent of the matches will be out there on the fringes. It is easy to say "This doesn't look like a good match." Easy - even lazy.

For this project it doesn't matter, but I would be curious to see what kind of match the Holocaust Baby would have with Mr 64.2's siblings, if he has any.

I have said this before. You have to test everyone. I expect I will find opportunities to say it again.
Posted by IsraelP at 6:20 PM