After getting what I could from the newly-indexed records from Skalat, Rozdol, Skole, Zbarazh and Komarno, I decided to circle back for a look at the earlier Stryj records that I had not gotten to when they came out a couple of years ago. Unlike the new records, the JRI-Poland site links to most of the actual older records.

The records in question are births, deaths and marriages for 1906-1914. I searched only for "Pickholz" and turned up thirty-five births, eleven deaths and eight marriages. Most of them are people I already knew, but there is often additional information. (Of course, I need to find others that take into account name changes based on marriage.)

Leibisch's wife Chaja Kohn
Then there was this:

The 1907 death of Beile Kohn age twenty-eight days. Her parents are Leibisch Pickholz and Chaja Kohn. We have no one named Kohn, by any spelling, so Chaja is obviously a "new" person and I hadn't a clue who brought her into the family.

My Given Name Analysis page for variations of Leib was not much use. We do have an Aryeh Leib Pickholz married to his first cousin Chaja Pickholz, with seven children born in Stryj during the period 1899-1918, but no one in Chaja's family was called Kohn. Her mother is Sara Rivka Pikholz and her father is Salomon Lerner, with the family known as Pikholz everywhere - even on Salomon's death record.

On the other hand, Solomon Lerner is a kohen. Nah...that's can't be the explanation. Quite impossible.

Fortunately when I moved on to the birth records, this same Beile appears, with the same parents - Leibisch Pickholz and Chaja Kohn. There is no house number but there is a clear identification of Chaja.

Her parents are clearly indentified as Salomon and Sara Ryfke from Rozdol. No "probably" about this one.

Someone in Stryj decided that Chaja's parents are not Salomon and Sara Rifka Pickholz - and not even Salomon's birth name Lerner - but the caste name Kohn. This was done only for this one child, and on both the birth and the death records. (We have birth records for five other children in this family, with everyone named Pickholz.)

Who would have even considered this possibility??

Leib, the father of Lea "Pickholz/Langenauer"
Having identified two "Leib Pickholz" records in Skalat in the last couple of weeks and another Leib from Rozdol/Stryj above, we have another unknown Leibisch Pickholz in the Stryj birth records. 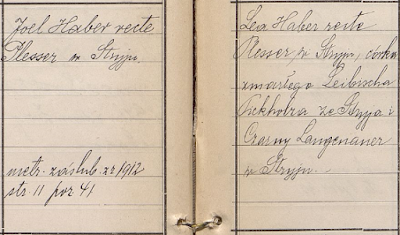 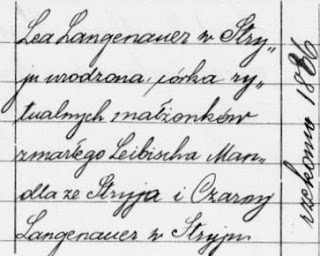 So who is THIS Leibisch Pickholz? We have the 1912 marriage record for Joel and Lea which gives her birth year as 1886. So Leibisch would have been born no later than the mid-1860s. But all the Leib Pikholz we have in the Rozdol area before 1870 are either married to other people or dead from childhood. So is this someone new?

And Joel and Lea have another daughter, Lybe, whose 1912 birth record also identified Lea's father as Leibisch Mandel.

So is this Leibisch a Mandel or a Pickholz? Or maybe both?

(Bear with me a minute)
As it happens, we have a marriage between Kalman Pikholz and Libe Mandel. Might Leibisch be their child? (Joel and Lea named their first daughter Lybe.) We have three records for daughters of Kalman and Libe - a death for infant Hendel (or Heudel) in 1886 and births for Chawa (1887) and Serka (1891). Might Kalman and Libe have had a son twenty years earlier?

And who is Kalman? We have only two Kalman Pikholz in our database, this one and the son of David Pikholz and Serka Kawa. Serka died in 1888, so when Libe and Kalman have a daughter in 1891, it gives me the idea that these two Kalmans are the same person.

The first Kalman, the documented son of David and Serka, was marriied to Feige Lerikstein and they had children in 1879 and 1880. Perhaps Feige died and Kalman then married Libe Mandel. That theory has worked for me until today and it is noted in my database as "probably."

But Leibisch puts paid to that. I have no reason to think that Kalman had a son with Libe before he married Feige, then had more children with Libe after Feige died.. Besides, we have Kalman's birth record from 30 Septenber 1856. No way was he Leibisch's father at age ten.

So we are back to the question who is Leibisch who was married to Czarna Langenauer? (Wait for it...) I have a theory. One that doesn't rely on an actual error in the record. Nor is it connected to the fact that Libe Mandel had a brother Leib (1858-1912).

Libe Mandel - the same one, her identity confirmed by her parents' names - was married to Abraham David Wiesler. They had two daughters - Chaje Jochewed (1876-79) and Rachel (1878-79). Abraham Wiesler died at age thirty-two on 30 November 1880. Was Leibisch his son? (Named for the same person as Libe's brother?) Then when Libe married Kalman, some people referred to her son as Pickholz? I think that is what happened. I am not sure that this rises to the level of "probably," but certainly warrants a strong "maybe." I find it satisfactory, for now.