I have long said that one of the advantages of a surname such as Pickholtz is that it is both uncommon and unusual, so most anyone who has ever met one of us will remember. Since I have been working with genealogy records, I can add to this that many people recognize the name and send me references that I otherwise might not see.

The newly released AGAD records at JRI-Poland have produced several of these in the last two weeks.

The great Logan Kleinwaks sent me two records. The first is a marriage record from Chodorow, a town which I do not think appears in any of my family records.

I know the father of the groom, Aba Pickholz from Zurawno but this is the first I have seen his wife or any children. And here his son Mojzesz Jozef is being married.

The second is a death record from Bobrka, which appears in a few Pikholz records, mostly in regard to spouses.

On 20 January 1920, Nuchym Pickholz the son of Abraham and Taube died at age 76. They have him marked as a female, but that has to be just a clerical error.

We actually have someone who nearly fits, in this 1855 birth record..

Nachim Bikholz, the son of Abraham and Taube was born in house 295, a known Pikholz house. So this is the birth of the man who died almost sixty-five years later at age seventy-six. Wait, that cannot be right. The age on the death record almost certainly wrong and I will probably record it as such.

So Logan gave me two records which added significant information about people I already knew.

Early last Friday morning I received a record from Mark Jacobson who was working on Boryslaw records. The first is a death record for a woman we know.

Mark came back to me a bit later with a Drohobycz death record for someone who is clearly her son. As Mark said a couple of times as we discussed it, "This family definitely wanted to be found today."

Pinkas died 15 May 1921 at age sixty. His parents are clearly identified. But although I have birth records for this couple beginning 1865, I do not have this older child. At least if I do, I do not have him attributed to these parents. 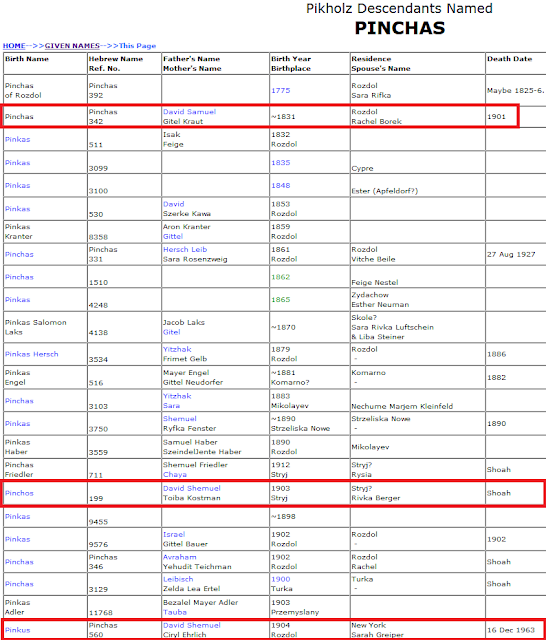 As I discussed a few weeks ago, we have a number of David Samuel in the Rozdol Pikholz family. Three of them have sons named Pinkas and all three of those have death information. So this must be someone else.

There are two Pinkas who are about the right age for the death record (based on the ages of their children) whose parents are unknown. The first lived in Stryj with his wife Feige Nestel and their first child was born probably 1877 or 1888. They have living descendants.

The second was married to Esther Neuman. They lived in Zydachow and had four known children, the first was born in 1890 and lived for two days. Their second child was named David Samuel and he lived to age five and a half. I have no idea what became of their two younger children. The David Samuel angle was intriguing, but I had nothing to connect this man in Zydachow to Drohobycz. But a second look made it clear.

The Pinkas who died in 1921 in Drohobycz lived, in fact, in Zydachow. It says so right on the death record.

So we now have four David Samuel Pikholz from the Rozdol area, with sons named Pinkas, after the patriarch of the Rozdol Pikholz family.

As Mark said, "This family definitely wanted to be found today."

The one whose unnamed first son was born on the second day July 1890. The 24th of Tammuz, 128 years ago yesterday.