The False Father
What do you call a situation where the father isn't who he was expected to be? On the few occasions when I needed to refer to such cases, I would call it a "false father" situation. Then I got into genetic genealogy and learned that the experienced folks call it a Non-Paternity Event, so I went with that. Until I began writing this post, when I looked it up on the ISOGG wiki. They define it thus:


Non-paternity event is a term used in genetic genealogy to describe any event which has caused a break in the link between an hereditary surname and the Y-chromosome resulting in a son using a different surname from that of his biological father.[1] The definition excludes minor changes in the spelling of the surname, and is implicitly limited to events after the relevant branch of the surname became hereditary.


They cite more than a score of synonyms and more than a dozen scenarios, including such innocuous instances like "Surname switch."

So I am going back to "false father" and changed the title of this post accordingly. It's much less cumbersome than "misattributed parentage event."

Anyway I am here to tell you about my first false father case. I have helped out on a few, but it's not anything I have run across in my own research or my own families. I am writing this with the permission of the people involved, after changing or omitting all identifying information. For the purpose of this post, it doesn't matter whether I have a connection to this family or how they came to approach me.

This is the basic family structure. 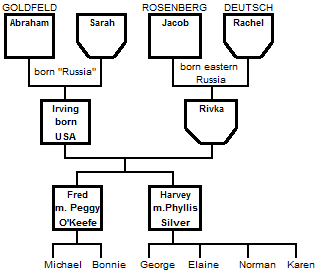 Elaine and Bonnie are, ostensibly, first cousins. Here is how GEDmatch sees them. (All the comparisons in this case are based on GEDmatch kits.)

They have no common segments of 7 cM or more and six segments in the 3-7 cM range.

According to the most recent iteration of Blaine Bettinger's Shared cM Project, first cousins share an average of 884 cM and 95% of first cousins share between 619 and 1159 cM. Clearly Bonnie and Elaine are nowhere near those numbers. In fact the segments they share are likely Identical By State (IBS) and do not represent any common ancestry whatsoever. (Bonnie's mother Peggy is not Jewish, so there is no intrusion of endogamy from her side.)

One of the two women is not the daughter of the Goldfeld brothers, Fred and Harvey. At least one of them, perhaps even both. Which?

Fred and Harvey are long dead, as is Harvey's wife Phyllis. All the children here are in their fifties and sixties. The entire family lives in a large US city which has probably never had as many as 30,000 Jews.

Another test, by George
The obvious way to proceed was to ask Bonnie's brother or Elaine's siblings to test. Elaine's older brother George took an autosomal DNA test - here too, I am not sure he is particularly interested in genealogy and my contact was his wife Cheryl.

George's top match is his sister Elaine, as expected, followed by his first cousin Bonnie. But let's look at the numbers. 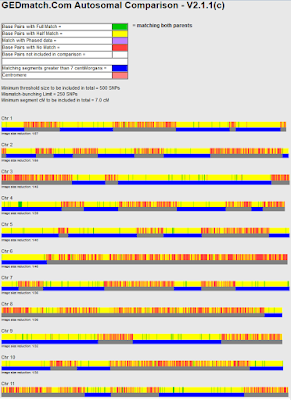 Since this is sensitive and I am new at this analysis, I asked CeCe Moore and Lara Diamond to review my logic. Both agreed that we are looking at half-siblings.

We see on the right the one-to-one comparison between George and Elaine. There are no significant green areas making it clear that they do not share two parents. (The yellow areas are segments where we see one common parent.)

Elaine and George share 118.9 cM on the X chromosome which must indicate that they have the same mother, since George gets no X from his father. Elaine and George have different fathers.That explains why Elaine and Bonnie are not related.

I decided to attempt to solve this question by looking at George's other matches and seeing what they share. Beforehand, I had to have a look at the geography. I knew from the documents that I had seen, that Fred and Harvey's mother Rivka was born in eastern Russia as were both her parents. Their father, Irving, was born in the US and all I could see was that his parents were from "Russia." I went into the JewishGen Family Finder and looked up their surname Goldfeld. There is one Goldfeld researcher and he said they were from Vilna. Since the name is rare, I figured that Irving Goldfeld's father Abraham was also from the western part of Russia, what is now Lithuania and Belarus.

I manage over 110 GEDmatch kits for my own families and it has become something of a joke on the Jewish genealogy groups on Facebook that most European Jews match several dozen of my kits. George matches over forty of my family kits. But seven segments stand out.

He has three segments on three different chromosomes which match my Jaffe cousins, from Borisov in Belarus. These matches appear to come from Irving's Goldfeld side. Neither Bonnie nor Elaine share these matches.

George has two segments which match my Kwoczka cousins who lived in Zalosce, near Tarnopol. These appear to come from Rivka's family, who lived a bit further east. Neither Bonnie nor Elaine shares these matches.

George has a match with nine of my family members on chromosome 21, about which I have written before. This group consists of two apparently unrelated parts of my family, one from the Tarnopol area, the other from Hungary. This also appears to be from Rivka's family. Neither Elaine nor Bonnie shares this match.

Finally, George matches a segment which appears to come from the other side of two of my second cousins. That family lived in Schedrin, in today's Belarus so is probably a Goldfeld match. Elaine does not share it, but Bonnie does.

If Bonnie and George both match a segment that comes from the Goldfeld side, I can conclude that Fred and Harvey are full brothers. This is far from 100% convincing.

A better way to check this out is to get Bonnie's brother Michael and George and Elaine's younger brother Norman and younger sister Karen to take autosomal tests. They would likely have less ambiguous results than the George-Bonnie match.

Elaine's father
After preparing my analysis and conclusions, I met with Elaine, her husband Rick, George and his wife Cheryl using GoToMeeting, which allowed me to show them the imges above and more. I asked them in advance, as I had during earlier emails with Rick, if they are prepared for whatever we might find. Rick assured me that all they wanted was the truth and that whatever it is, they could handle it.

So I explained to them that Elaine's father was not Harvey and showed them the proofs. Rick said that Elaine is still the same Elaine, no matter who her father was.

I suggested again that testing Norman and Karen might clarify the status of Fred and Harvey, but they were not sure if they wanted to tell the younger siblings anything at all.

And Rick asked me if I could tell them anything about the man who fathered Elaine.

I went back to GEDmatch and used their tool "People who match one or both of two kits" to find Elaine's matches which George does not share.  There were, of course, many - Most of them have Jewish-sounding surnames, so there is that. About fifteen of them matched on segments greater than 25 centiMorgans. The longest was just over 50 cM and there was another over 40 cM.

The one over 50 cM came with another of over 20 cM and they triangulated. I wrote to both. The smaller one answered, but she knows nothing that can help. The person with the 50+ cM has not yet responded. Perhaps she will later. 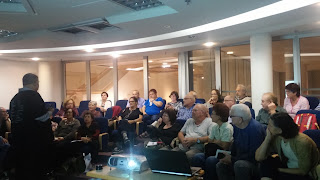 I had a nice turnout Sunday evening for the Israel Genealogical Society meeting in Kefar Sava. It was a lively, Hebrew-speaking crowd and with the questions we went well over the allotted time.

Next up, the genealogy series at Yad Vashem, in partnership with the Central Zionist Archives.
Posted by IsraelP at 5:36 AM