Issues With GEDmatch - A New Example 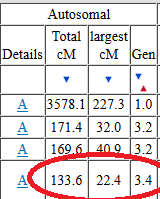 Last night, I received an inquiry from Banai Feldstein, whom I am sure many of you know, reporting that her mother has a new match with one of my people. His name is Marty and his Family Finder results came in maybe ten days ago. He is her fourth closest match over all on GEDmatch and she thought it worth a look.
Family Tree DNA is in the same ballpark.

Marty is my second cousin on the Pikholz side. Marty's sister Rhoda and first cousin Roz do not appear on Banai's mother's match list at all. (Banai herself does match Rhoda and Roz, which indicates something from her father.)

Banai's mother's match of 22.4 cM with Marty overlaps a match with a match of 13 cM with Herb who is a first cousin to our fathers - so there seems to be something on our joint Pikholz/Kwoczka side. But none of the other cousins are there and it appears fairly obscure.

I did a one-to-one and the results were different. 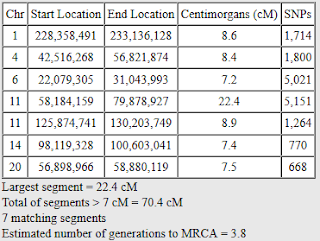 So we decided to leave it for now, but this is another internal inconsistency with GEDmatch data. Their stack has become worrying and it cannot serve their image well among users.