Our Genetic Portrait - Part One

DNA Painter
A few months ago, I came to the conclusion that I have been spending entirely too much time on the trees and not enough on the forest. I would hear from people who think they may be related to my family and I'd look at their GEDmatch kits, comparing them to my 110+ project members looking for segments with multiple matches of 10 centiMorgans or more to see what patterns would show up.

Most of them showed some direction, but nothing really specific, appearing mostly to be too far back in time to do anything with, especially without the benefit of common surnames, geography or multiple family kits

I decided I needed to do some chromosome mapping in order to attribute particular chromosomes to specific ancestors. I had used Kitty Cooper's wonderful Chromosome Mapper a few years ago, but I was far from comfortable with it. I circled the Chromosome Mapping course at GRIP next June and wondered if it would relate to the specific issues of endogamy.

A couple of weeks ago, someone on Facebook mentioned a new tool called DNA Painter and I decided to give it a try. This is a report on my first efforts. The chart below shows my first 183 segments - 60 on my father's side and 123 on my mother's side. And there will be more.

In the course of creating this map, I have been in contact with the developer and he has welcomed my comments and questions. There is a lot to like here.

The data comes from the GEDmatch one-to-one and X-one-to one results.

What you are probably supposed to do is take all your matches with a particular person and copy them into the Painter, but this is not a responsible way to deal with families from endogamous populations.

For us, we have to go segment by segment, analyzing each one, looking for matches with multiple people that are based on more than "I match cousin so-and-so, so we must be related IN THE MOST OBVIOUS WAY." Not necessarily. I'll get into that in greater detail on my mother's side. 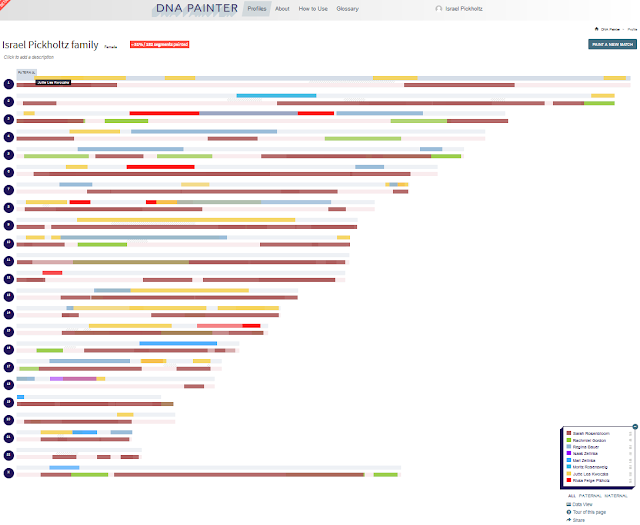 I decided to take the next, obvious step - the ancestral matches of my father's sister and brother, Aunt Betty and Uncle Bob, since all their ancestors are also my ancestors. But their matches are not the same as my father's matches (as represented by his children), so there will be places where the final map will include segments from both my grandfather and my grandmother AT THE SAME PLACE. This is a good thing, because it fills out the ancestors, but it will require extra care when some new person comes into the picture with a match that needs defining.

Mapping my father's side
I began with my fourth cousin Anna, the great-granddaughter of Uncle Selig about whom I have written several times.
The circled matches on Anna's chromosomes 3, 8 and 15 are definitely from our second great-grandmother Rivka Feige Pikholz and are the basis of the demonstration that Anna and her half-brother David are descendants of Uncle Selig. I also included Anna's matches on chromosome 21, as these are clearly from the same source.

But I tend to be conservatiive, so on chromosome 15 where Marty and Anna share 50 cM, I decided to record as certain only the 22.6 cM that Anna shares with Marty and Herb. The rest of Anna and Marty's long segment I recorded as "possible," though I could have chosen "very likely." Here is how that segment appears in full. 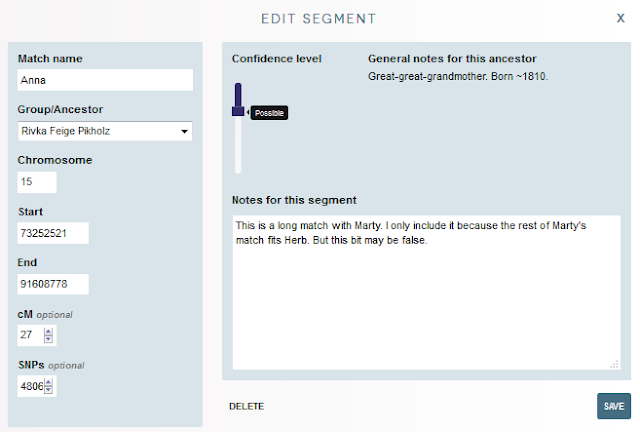 Another set of Rivka Feige matches came from my father's half second cousin Lia who contributed five segments to the map. These are the Rivka Feige segments from Anna and Lia. 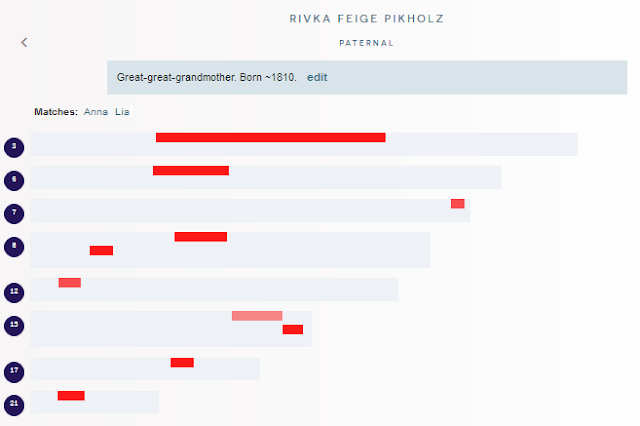 Note that on chromosome 15, one segment is pink rather than red. That is Marty's "possible" segment.

The second easy match was with Debbie from North Carolina, whom I wrote about in May 2016. She has one large match with us on chromosome 2 and and another on the X. The first is definitely from my second great-grandmother Mari Zelinka and the second is either from her or from my grandmother's Bauer/Stern side, but since I have seen no other indication this might be the case, I attributed the segment to the Zelinkas and called it "very likely."

Together with two segments from my fourth cousin Milan in Prague, this is what we have from Mari Zelinka.

There is also a single segment in purple which we received from Mari Zelinka's father - based on a match with my fifth cousin Cyndi Norwitz on chromosome 18. 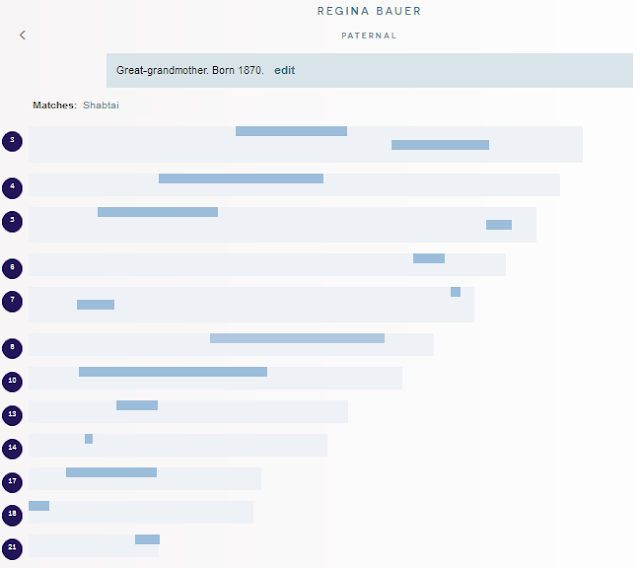 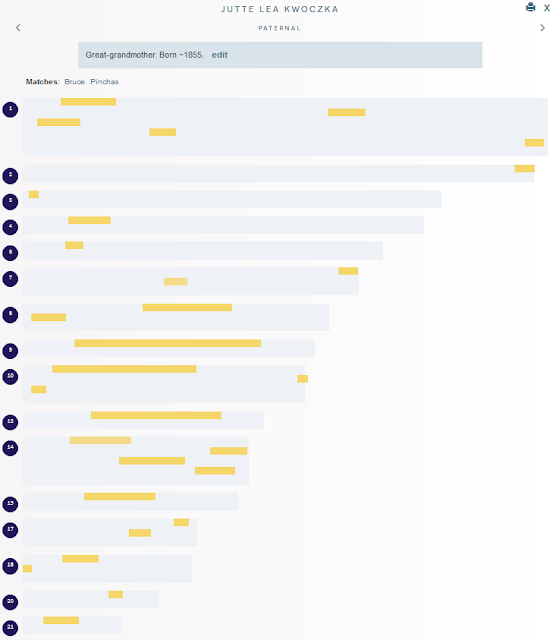 This gives me a total of sixty segments of low-hanging fruit on my father's side, supposedly representing 36% of my the ancestral DNA from that side. 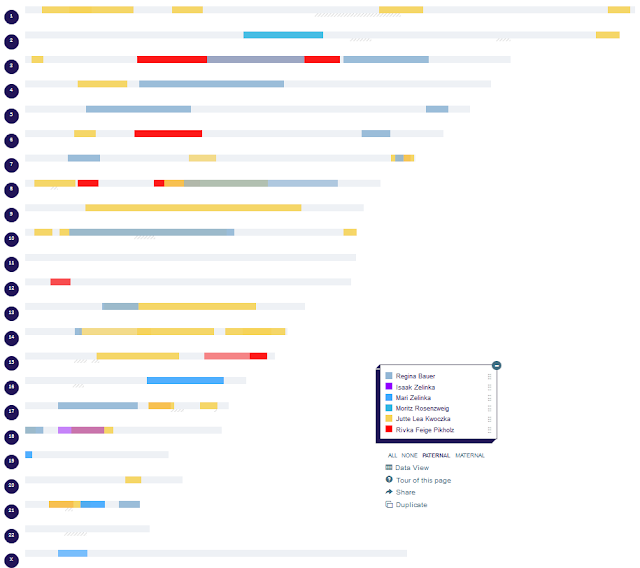 But in fact that is not correct. As you can see clearly on chromosomes 3, 8 and 18 there are overlapping ancestors. Different versions of the same segment from different ancestors. Here is where I have to be very careful when I want to look at matches with new people. And the 36% is nםt representative of all the ancestors on my father's side - it just refers to segments which have at least one ancestor represented.

Perhaps I shall redo the map later, so I can show a separate set of chromosomes for each of my paternal grandparents.

My mother's side is a different story entirely and I hope to tell you about that next week.

For now I shall wish you all a happy, healthy, peaceful and prosperous 5778 and that you and your families should be written in the Book of Life. 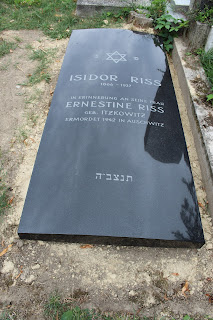 When I visited the cemetery in Vienna a few months ago, I reported that several of the family graves had no tombstones or had tombstones in very bad condition. I was kind of hoping that close family members might address this and I can now report that one actually did. The grandson of Isidor Riss sent me photographs of the stone he put up for Isidor (who died in 1937) and his wife Ernestina who was killed in Auschwitz.

In other news, I had a look at my Ancestry DNA matches for the first time in a long time and dropped a note to a woman named Andrea whom I didn't recognize but who seems to be fairly closely related. Turns out she is the daughter of a second cousin on my mother's paternal side. I knew her name but we have never met. I asked her to join GEDmatch and she said she would. Meantime we are now Facebook friends.
Posted by IsraelP at 11:08 AM