In  my posts last week and the week before, I introduced DNA Painter and described how I identified segments that my family received from specific ancestors of my father and from each of my mother's parents. The segments are pretty much low-hanging fruit - easy to identify and confirm.

This week, I added five additional relatives on my father's side. The results from one of them quite surprised me. Which is why I am writing this.

So Susan has now added another fifteen segments to the map. They are not as specific as I'd like, but we take what we can get. They represent what comes from my grandmother - and to Susan, from her grandfather. 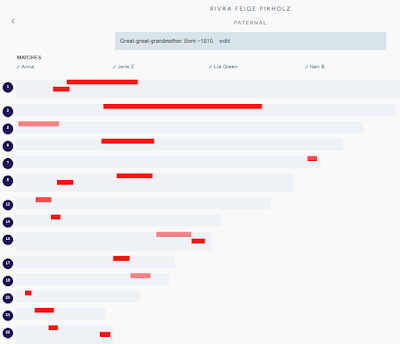 The early Pikholz family itself is complicated. I included two great-grandchildren of my great-great-grandmother's brother Uncle Selig in my first round, but the descendants of her other two brothers are Pikholz in muliple directions so are not useful for this exercise. All except two - Nan and Jane, who are second cousins to one another and fourth cousins to me. What we share with them is common to our second great-grandparents Rivka Feige and Moshe Hersch.

Together Nan and Jane added eight segments to the ten I already had. Two of those are on each of chromosomes 1 and 22  and the others are on chromosomes 5, 14, 18, 20. Some of those do not rise to the level of "certain" and one is merely "possible," that being the match on chromosome 5. 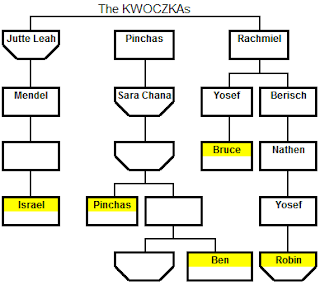 The segments here come to us from Jutte Leah, my great-grandmother. I had eleven segments from Pinchas, my third cousin, and another nineteen from my father's second cousin, Bruce. But I also have three third cousins once removed who had tested, Pinchas' niece and nephew, and a granddaughter of Bruce's first cousin. The truth be told, I did not expect to get much from them.

Ben added two segments - one of 16 cM on chromosome 9 and one of 26 cM on chromosome 20. The latter overlaps a smaller segment which I already had from his uncle Pinchas. With Ben in, his sister did not add anything else. (I knew from before that her matches with us were not as good as Ben's.)

Robin was the surprise. She added eight segments. They totalled 154 cM, with the largest segment 32 cM. My first contact with Robin was after she tested and that was how we found each other. I had my doubts about how much her results would contribute, but 154 cM is impressive.

Once again we learn the lesson - test everyone.

There is one oddity. More than an oddity, actually. Here is chromosome 10.

Robin's segment falls within Bruce's segment, but Robin and Bruce do not match each other there - or anywhere else on chromosome 10. So they must have received those segments from different people. It is possible that one of these segments comes from some outside endogamous source. But it is also possible that one received this segment from Rachmiel's mother and the other from his father. (The same as Jutte Leah's mother and father.)

Robin's matches with Jutte Leah's descendants on that segment are with Aunt Betty, Herb, Lee and Roz.

Bruce's matches on his segment are Aunt Betty, Rhoda, Marshal, Lee and my sisters Amy and Judith.

The appearance of Aunt Betty and Lee on both segments gives me pause. For that matter since Rhoda and Roz are first cousins, that is also a problem, for their grandmother only received the segment from one of Jutte Leah's parents. So let's have a look.

The Roz-and-Rhoda problem is not really a problem because Roz' match with Bruce is not in the same place as either of Rhoda's two matches with Robin.

But there is no way we can avoid the problem with Aunt Betty and Lee. Their matches with Robin are within the same range as their matches with Bruce. They must be matching on their other chromosomes - the one from their other parent.  If say they both match Bruce on the Kwoczka line, then somehow Aunt Betty matches Robin on my grandmother's side and Lee matches her on his father's side. Those matches could be on any of Robin's ancestral lines - except the one through Rachmiel Kwoczka.

I must go back and downgrade Robin's segment to "possible" or maybe delete it entirely. Bruce's match seems more likely so perhaps I can call it "very likely," but since my policy is to be conservative, I'll go with "possible" for both Bruce and Robin.

(I wonder how many other matches are like that. Better not ask.)

The total from Jutte Leah Kwoczka now looks like this: 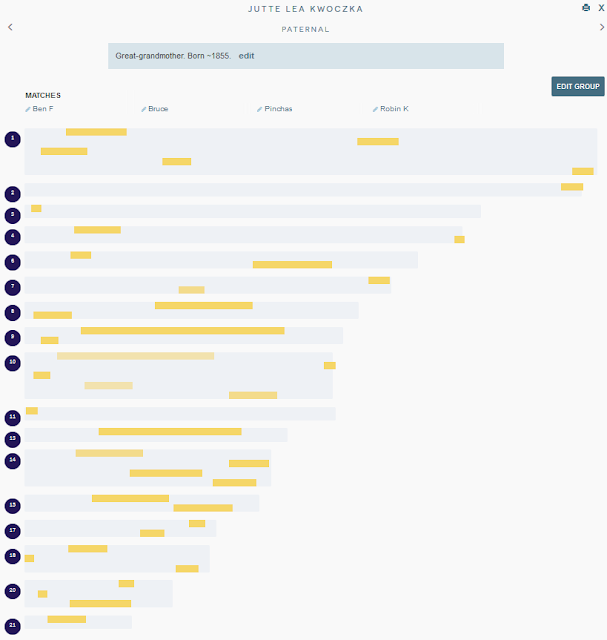 Wishing everyone an easy and meaningful Yom Kippur.
גמר חתימה טובה
Posted by IsraelP at 9:33 PM