In my post last week, I introduced DNA Painter and described how I identified sixty segments that my family received from specific ancestors of my father. The ancestors concerned are three of my father's grandparents, two of his great-grandmothers and one second great-grandfather. The segments are pretty much low-hanging fruit - easy to identify and confirm.

Mapping my mother's side
My mother's side is quite a different story. Not only do we have few known ancestral lines, but we have no test results from third or fourth cousins. Since all we have are second cousins (plus two first cousins, Kay and Leonard), I can only use DNA Painter to attribute segments to my grandparents, Rachmiel Gordon and Sarah Rosenbloom. I have no idea what they received from which of their parents.

There are now 132 identified segments on my mother's sides, which is an update since last week.

On the Gordon side, we have two second cousins on GEDmatch - Judy and Ruth. They are first cousins and their grandmother is Rachmiel Gordon's older sister. Andrea, the daughter of Judy and Ruth's first cousin, has also tested is new to GEDmatch and she adds nine segments that Ruth and Judy do not have.. And there are two third cousins who tested but have declined to upload to GEDmatch.

We have six tests on the Rosenbloom side, three from my grandmother's older sister Alta and three from her younger brother Hymen (Chaim Benzion). Here is the  structure of the family - both sides together. Those who have tested and uploaded to GEDmatch are in yellow. 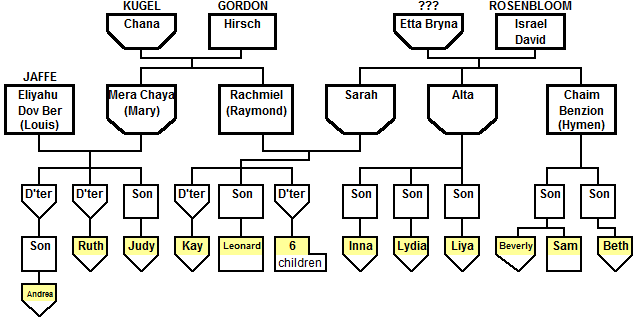 The Gordons
I started with Judy and Ruth. Judy has twelve matches with us - "us" being the eight grandchildren of my grandparents. Ten of those twelve have enough good matches that I consider them certain. On chromosome 5, Judy has a match with Kay and a similar-sized match with my sister Sarajoy. Normally I would reject that as being not good enough, but the fact that Kay's father has no Jewish DNA gives her a bonus since there is no endogamy from that side. Nonetheless, I rated this match "very likely" rather than "certain."

On chromosome 9, Judy has a match with me, a similar match with my sister Judith and a much smaller match with my brother Dan. I would like to see more people here, especially either Kay or Leonard, so here too I rated it "very likely."

Next I looked at Ruth's matches with us, ignoring those which she shares with Judy and which I had already recorded. There are fifteen. Ruth's total match with me is nearly 500 cM, much higher than we would expect from a second cousin, and I suspect that her father has significant Galitzianer in his background. (His parents died when he was young, so we really don't know.) Here Kay and Leonard become more important. Matches which include them, I regard as certain . Matches which do not, I downgraded to "very likely" because there is a non-negligible possibility that this such matches come from our fathers rather than our Gordon mothers.

I also downgraded a match between me and Ruth because although Leonard is there, his match is much smaller. It simply doesn't feel certain. All told, Ruth has eight certain matches with us and seven "very likely."

Andrea has nine matches but six of them are only with my mother's children. I marked those as "very likely" rather than certain. I left a comment in those cases. 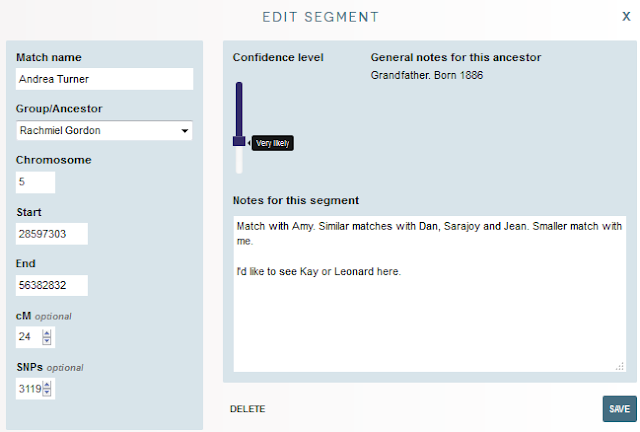 This is the set of matches between Ruth, Judy and Andrea and my grandparents' eight tested grandchildren. 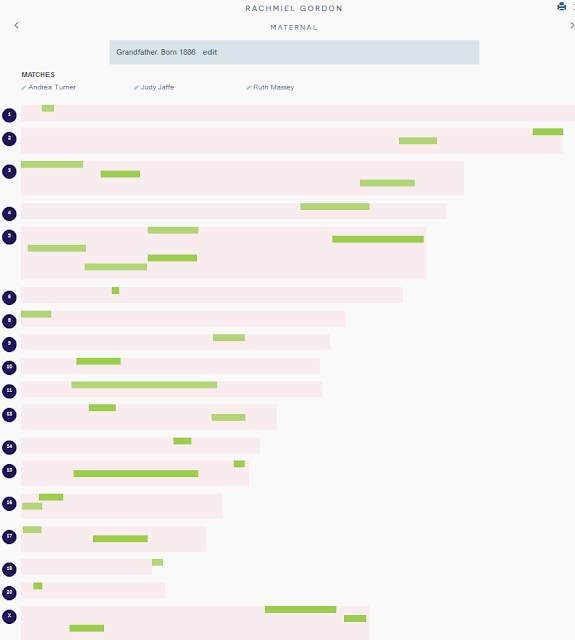 The Rosenblooms
A bit of background on my grandmother Sarah's family. She and her sisters and brother were born in Borisov in what is now Belarus. Her father Israel David Rosenbloom appears in the 1874 revision list in Borisov so I assume that's where his family had lived. His wife Etta Bryna - whose surname is unknown - could have been from anywhere.

My grandfather Rachmiel Gordon was born in Dolginov which is not far away and it is possible, even likely, he had some family in Borisov. Sarah's sister Alta married Berl Kaplan whom we think was from Borisov, but we are not sure. Uncle Hymen married in Pittsburgh - to a woman from Schedrin, also Belarus, but over a hundred miles from Borisov.

So I decided that I could not set matches that did not include any of Uncle Hymen's grandchildren as "certain" due to the possibility that there was some kind of connection between Sarah and Alta's husbands' families.

But it is more complicated yet. Louis Jaffe, Judy and Ruth's grandfather, was also from Borisov, so I had to be on the lookout for matches that might have included his family mixed in with the Rosenblooms.

I will spare you all the detail, but there are a lot of segments that required analysis and decisions. These are the results of the six Rosenbloom second cousins - three from Alta's granddaughters and three from Uncle Hymen's grandchildren. (Hovering over and clicking on the segments gives much additonal information.) 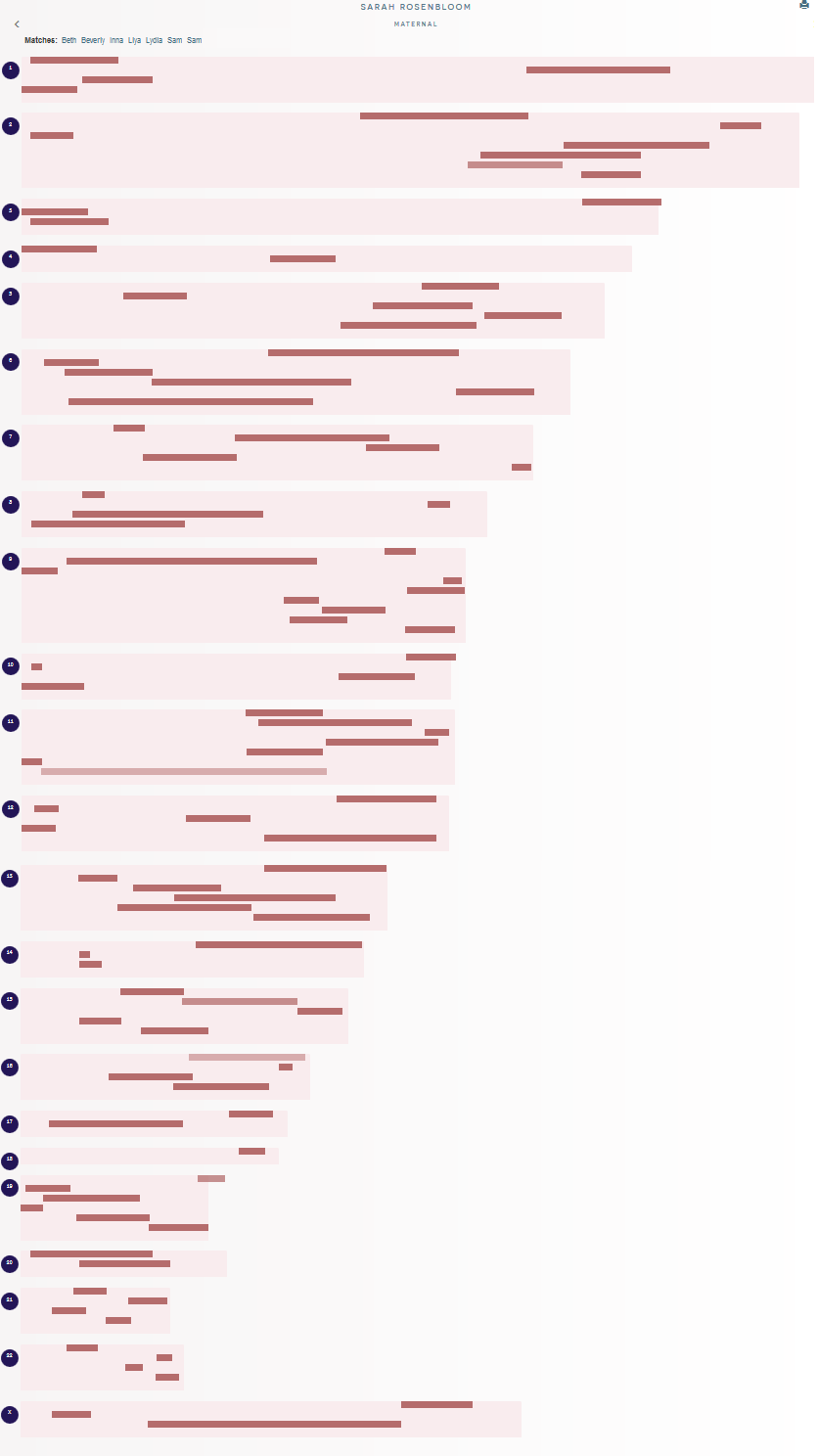 Lots of segments here. Quite a few overlapping segments as well, because a match with one of Alta's granddaughters may be similar to but different from a match with one of Uncle Hymen's grandchildren. This is not trivial, even if there is some (unnecessary) duplication.

If you look at the segment at the far right end of chromosome 19, you will find a similar match on the Gordon set above. Here is the chromosomal view. 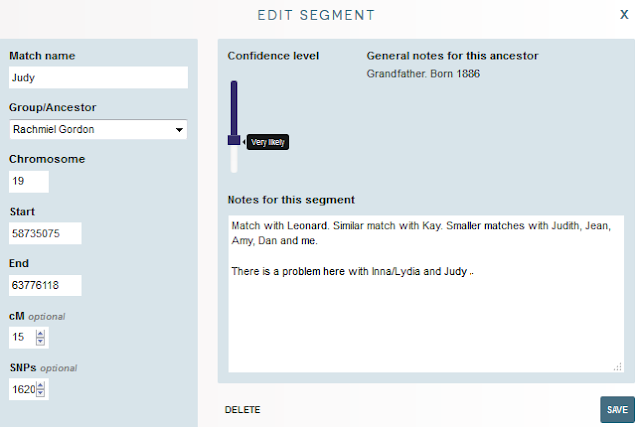 These are not distinct Gordon and Rosenbloom matches. Judy triangulates here with Lydia and Inna. Like some kind of general Borisov segment. And who know how many more are similar, but we cannot identify them. I rated it as "very likely" but I'm not even sure what that means in this context.

And can you imagine, there are people who would do this automatically!! Endogamous populations are hard to do well. Anyone can do them badly.
Posted by IsraelP at 7:24 AM