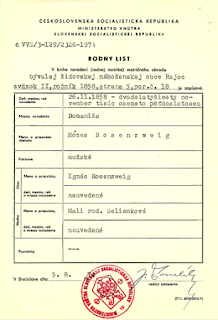 He was born 26 November 1858 in Domaniza, Trencin County, Slovakia to Ignac (Yitzhak Yehudah) Rosenzweig and Mali (Miriam) Zelinka. Both his parents' families had lived in Trencin County for several generations.

He had a sister who died just before her sixth birthday and three brothers, two older and one younger.

Moritz' mother Mali died in 1905 at age eighty and Ignac in probably 1917 at age ninety-six. Both are buried in Vag Bestercze.

In February 1885, Moritz Rosenzweig married Hermina (Chana) Schaefer in Budapest. They had a daughter Elvira and a son Siegfried (aka Aunt Ella and Uncle Fred). Hermina died in 1889 and the next year, Moritz married Regina (Rivka) Bauer of Kunszentmiklos. They had three children in Budapest - Sigmund, Albert Jules and Ilona (later Helen). Uncle Julie (later AJ Rosen) was named Yitzhak Yehudah in 1893, after his grandfather who lived another two dozen years.

In 1901, Moritz went to the United States, arriving in New York but bound for Allegheny Pennsylvania, now the North Side of Pittsburgh.

According to the passenger list, he was going to his cousin in Allegheny. I cannot read the name precisely and do not know who it might be.

The following year, Regina arrived in Allegheny with the five children and one year after that my grandmother was born. She was named Miriam (Margaret) after Moritz' living mother.

He became a US citizen in 1906. I see no evidence that he ever returned to Europe, not for his parents' funerals nor to visit his ninety year old father. (I checked both US passport applications and incoming passengers on Ancestry.)

Moritz worked as a cabinet maker and the family attended the (predominantly Hungarian) Poale Zedeck synagogue in the Hill District. He served on the building committee for the new building in Squirrel Hill and died at age seventy, just after the first High Holiday services were held in that building. 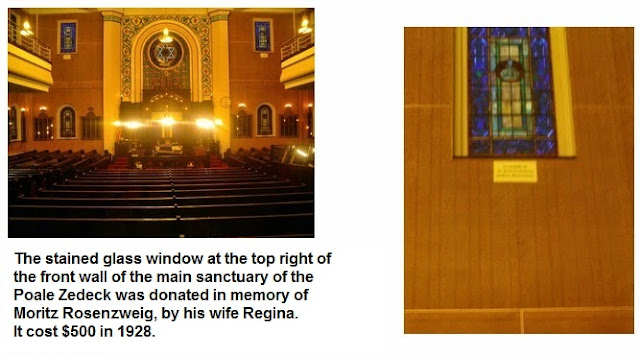 Housekeeping notes
I have just set for 12 February at the Orange County JGS.

Program chairs - and people who know program chairs - please note. I have some available dates during my coming US trip, particularly the weekdays between 23 January and 2 February, in the east and midwest and 14-16 February in the NY/NJ area  Several topics are available including the Lazarus-Endogamy talk which I presented in Seattle and a new one where DNA is not the main point of interest.