My friend Leah Gedalia, the former President of the Israel Genealogical Society, was here for two hours this morning, to talk about the FTDNA and GEDmatch results of her husband. Nahum himself has no interest in any of this - and I have never met him. 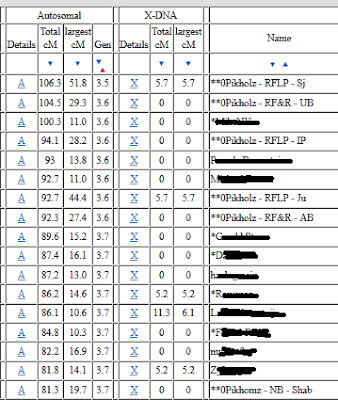 Nahum's first eight matches on GEDmatch include two of my four sisters, my father's brother and sister and me. His seventeenth best match is also one of mine, my father's second cousin Shabtai on my grandmother's mother's Hungarian Bauer/Stern side.

The six in my family have a longest segment from 19.7 to 51.8 cM and those not from my family are all less than 17 cM. So ours are clearly more significant.

In FTDNA, Nahum lists his ancestral surnames as being from Saloniki and Serbia, but his mother is from Hungary, so a match with the Hungarian part of my family makes sense. There is no reason he should match my Belarus or Galician families closely.

So I followed my own protocol, first sorting on the "Name" column to get all of my kits together - Nahum matches forty-some kits in my project. I selected the six kits above, plus my other two sisters, my double second cousin Lee and my second cousin Susan. Also my half second cousin Fred on my grandmother's father's side. Lee's brother Marshal does not appear in Nahum's GEDmatch match list, though they are suggested fifth-remote cousins according to FTDNA.

I did not include Uncle Bob's daughter and Aunt Betty's son.

Chromosome 1 shows a set of matches, 10-18 cM on a single segment with seven of us including Fred. There is also a small match of 8-9 cM with Aunt Betty, Uncle Bob, Lee and me.

I left it to Leah to do the triangulation on her own, but these segments are lined up well and in any case, she is quite sure that none of them should be on Nahum's father's side.

So based on the match with Fred, this groups appears to come from my great-grandfather's Rosenzweig or Zelinka families, both of whom lived in Trencin County in western Slovakia. (Fred has only one Jewish grandparent - my grandmother's half sister - so there should not be any endogamous interference from his other sides.)

On chromosome 2, Aunt Betty and Shabtai have a matching segment of about 10 cM. They triangulate.

On chromosome 4, Shabtai has a segment of 10 cM which matches a segment of 7.2 cM with Aunt Betty. Surprise, Leah - Nahum's father has something to do with this.

Chromosome 5 has the very large matches - 51 cM, 44 cM and three in the 27-30 range. Plus 19.7 cM with Shabtai. Most of them line up well and here too I left it to Leah to do the triangulation but it looks good.

The only other interesting match is a segment of chromosome 21, where an 18.2 cM segment with Lee triangulates with a 10.1 segment with Susan. Susan has an X match with Nahum, which cannot come from our side, but must be from her mother or her paternal grandmother.

Next I looked at Nahum's matches with other parts of my projects - my other known Pikholz relatives, the Rozdol Pikholz family, other Skalat Pikholz descendants. There was nothing remarkable there, almost as though each match represents a completely different path to Nahum.

But one match stood out. Nahum matches my fourth cousin Anna, great-great-granddaughter of Uncle Selig, on five segments, one of which is on the large segment on chromosome 5 above. This is a smallish 6.92 cM segment which, by all logic, should be a false segment, Identical by State (or by Chance). Nonetheless, Leah will include that in her triangulation, just to be sure.

I entered Nahum's kit and raised the threshold from 7 cM to 12 cM, to keep the results more meaningful and more controllable. He matches 5147 kits.

This tool shows all his matches arranged by chromosome, moving along each chromosome from left to right. The graphic shows the matches in colors which groups matching segments together. We wanted to see who else matches Nahum on the segments of chromosome 1 and 5 where Nahum matches my family. 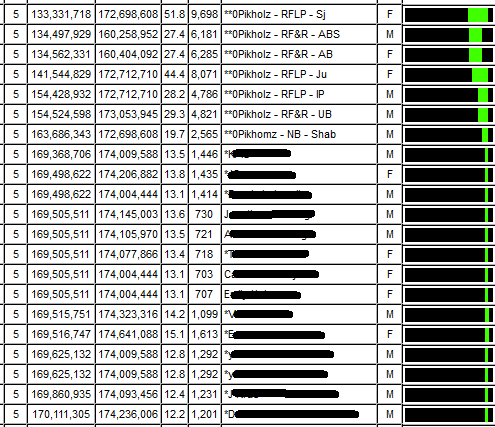 There is an additional column with the emails of the matches, so Leah can contact them, but it looks to me that they are a bit too far to the right to be useful.

Our segment on chromosome 1 has many dozens of matches and I'll leave it to Leah to decide if she wants to follow them up. They all appear to be less than 20 cM, so not likely to be productive. But then our matches here are also under 20 cM.

There are only four matches with our segment on chromosome 2, where Aunt Betty and Shabtai match Nahum. I don't know how promising that is, but it's not a lot of work to send notes to four people. Especially since it's Leah doing the sending.

FTDNA matches
Finally, we looked at Nahum's matches on FTDNA, based on surnames. Leah considers it likely that the chromosome 5 match which seems to come from my Bauer/Stern side, is the one which will most likely pan out. Leah was not familiar with the search filter (on the top right of the match page) which uses ancestral surnames, so I showed her how that works. One of the drawbacks with this filter is that you cannot simply write "Stern" and expect to get a neat list of matching Sterns. The search will give you everyone with Stern in the name - whether at the beginning or at the end. Nahum has over a hundred Sterns, including my thirteen.

But first we looked at Bauer where we found eighteen matches that are not my family.  Most of those are not actually Bauer and the few left did not appear to have any relevance to us. 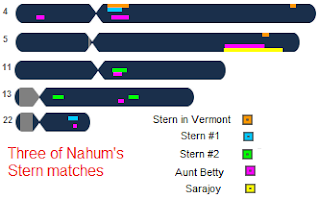 When we looked at Nahum's Stern matches, we picked three of the closer ones and ran a chromosome browser that also included Sarajoy and Aunt Betty. All three matched and two of them matched each other. (One of the three is a woman in Vermont whom I've been corresponding with about another, unrelated family matter.) Leah will write all three and check out others.

Finally, I mentioned that my great-great-grandmother Fani Stern may have been a Grunwald and Leah said that Nahum had Grunfelds. Those two need not be the same name, but could be, so we checked and saw that Nahum has six Grunfeld matches: Alice, Peter, Maxwell, Jeff, Julie and David. None of these matches is close, but we put them into chromosome browsers, just for fun. All but Alice match either Sarajoy or Aunt Betty and Jeff and Julie match one another. (I'm in a conversation with Jeff about some other part of my family.) So Leah will follow up with all of these too.

It was a good day's work. I'll add Nahum to my FTDNA project.

Housekeeping notes
Program chairs - and people who know program chairs - please note. I have some open dates for my US trip in the winter, including Sunday 5 February and Sunday 12 February. Weekdays are available between 23 January and 2 February. Several topics are available including the Lazarus-Endogamy talk which I presented in Seattle and a new one where DNA is not the main point of interest.
Posted by IsraelP at 11:42 PM