Etta Bryna - my great-grandmother
I wrote about the maiden name of my mother's mother's mother Etta Bryna Rosenbloom at length in the early days of this blog four and a half years ago and for those who want the details, it's worth a reread. She died probably in her late thirties and we know precious little about her. In addition to the information I presented back then, Renee Steinig found the death certificate of my grandmother's other sister in Islip, Suffolk County - but it lists both her parents' names as "unknown." The informant was the hospital.

So I am still where I was then. Etta Bryna's father is Yehudah and he is a Levi. My conjecture that she is a Lichterman still runs up against a lack of any proof that the Lichtermans - a known Borisov family - were Leviim, but the gravestones of the known Lichterman men have no Hebrew. The traditional grave of their sister Gitta Lichterman Benenson (below) calls her father "Yosef" with no mention of his being a Levi.

This is where I have been holding for the past four or five years.

Our new project for several Borisov families
Recently I joined forces with Galit Aviv to have a look at several Borisov famliies who appear to be connected to one another. These would be the Lichtermans, the Kaplanskys, the Benensons and the Rosenblooms. There are a couple of others which might belong here as well. To that end, we have added several people to the Rosenbloom Project that I set up at Family Tree DNA some years ago and are getting a few others to test - including a granddaughter of Gitta.

Galit - whom I have not met, but expect to see when I am in the US during the winter - is a good and resourceful researcher. Among other things, she came up with the following.

This is the 1908 death and burial record for Moshe Likhterman the son of R' Yudel
Likhterman the Levi, in Slutsk. He is also called "the son-in-law of R' Eliyahu" followed by the odd notation "l'm24." The burial is next to someone named Yehuda who died a few month earlier. Could this be the brother of Etta Bryna? The fathers of both are Yehudah who is a Levi. And is that Yehudah next to him perhaps his father? And what is that odd notation "l'm24?"

Slutsk is some ninety miles SSW of Borisov, but that needn't indicate a problem. Certainly not if this Moshe held a rabbinic position.

The next step was obviously to see the actual Chevra Kadisha records, the book from Slutsk which is the source for the above record.

I contacted the people who had submitted the Chevra Kadisha records and no one was quite sure what the source was, except that it was in Israel and that the translators (from Hebrew) too were Israelis. So I had a look at the web site of the National Library, on the campus of the Hebrew University here in Jerusalem, hoping I would find it either there or at the Central Archives for the History of the Jewish People which is now part of the Library.


The book is in the Manuscript Reading Room at the National Library, so that's where I went. It had moved since the last time I was there and is now in a pleasant room behind the cafeteria. Two young librarians, Ariel and Moriah set me up with a microfilm reader that had a scanner attached and brought out the film in a matter of minutes. 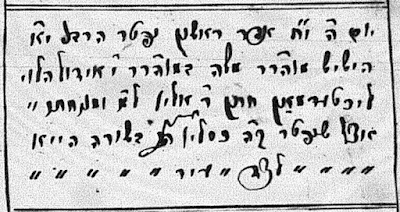 I saw that the transcription was faithful to the original text, with one small exception. (The original calls the deceased "yashish" which in modern Hebrew means elderly, while the translation is "venerable." But venerable was a more common meaning when the original was written.)

The original had the ל"מ (l"m) - left of center on the third line - but not the "24" which I assume was some sort of typographical error. But I didn't know what those initials meant or if they were significant.

Until suddenly I did. Because I had seen this before.

Four years ago, I wrote in this space about the correct name of Hersch Leib Pikholz of Rozdol and the solution to the problem was found in the records of what we call Kollel Galicia here in Jerusalem. The records in question are too poor quality to show here, but here is what I wrote in that earlier blog.


I was surprised to see that there were no contributions by anyone named Pikholz, despite the fact that Rozdol was the place that all the Pikholz families from that area had come from. There are no lists of Holocaust victims from Rozdol, but from our own records we know that there were Pikholz families there at the time. Certainly in the late 1920s. Eventually, I realized what had happened. The person in charge of collections for Rozdol, Pinchas Kerner, was himself a Pikholz son-in-law and he knew all the families personally, so instead of writing out the name each time, he simply wrote P"H as a personal shorthand.

l'm is shorthand for Likhterman!

R' Moshe's father-in-law Eliyahu is a Likhterman. I asked Ariel to have a look and he said "It wasn't uncommon for people to marry relatives." Maybe it's that simple.

But I don't think so. I read it differently. The rabbi Moshe ben Rabbi Idel the Levi Likhterman the son-in-law of R' Eliyahu Likhterman. How about Moshe (son of R' Idel the Levi) Likhterman? Ariel said he could see that possibility as well.

I think Moshe's father is a Levi but is not Likhterman. Moshe took the name Likhterman from his father-in-law. So Etta Bryna can be the sister of Moshe Likhterman without that being her maiden name - and the Likhtermans are not Leviim. The father of Etta Bryna and Moshe is. What is his - and Etta Bryna's - surname?

Now we go back to my grandmother's passenger list where she seems to be going to her "cousin J. Ben..." I demonstrated four years ago that this is Jacob Benenson, the husband of Gitta Lichterman. So is my grandmother calling a relative of her mother's sister-in-law (who lived in Slutsk!) "cousin?" Perhaps the cousin was Jacob and Etta Bryna is a Benenson.

I haven't a clue if the Benensons of Borisov are Leviim. Of the Benensons on Find A Grave, there are eight or nine men with photographs and Hebrew epitaphs. None say "Levi."

There are a lot of "if"s and "maybe"s in this highly speculative scenario and I am not about to jump to any conclusions. But for the first time in several years I see some possible movement in this part of the family. And some new possibilities. My instincts have been pretty good. Maybe we will learn something from the new DNA project and the new contacts.

Oh yes, I also looked at the burial record for the Yehudah who is buried next to Moshe Likhterman. He is someone not connected. Apparently they didn't number the plots, but recorded the locations according to the next grave over.

Housekeeping notes
Program chairs - and people who know program chairs - please note. I have some available dates during my coming US trip, particularly the weekdays between 23 January and 2 February, in the east and midwest and perhaps 14-16 February in the NY/NJ area  Perhaps even Sunday the nineteenth. Several topics are available including the Lazarus-Endogamy talk which I presented in Seattle and a new one about Uncle Selig where DNA is not the main point of interest.

It's been awhile since I have mentioned my book, available at www.endogamy-one-family.com.