After these things the word of the L-rd came to Avram in a vision, saying, Fear not, Avram: I am thy shield; thy reward will be very great... And He brought him outside, and said, Look now toward Heaven, and count the stars, if thou be able to number them: and He said to him, So shall thy seed be.   (Genesis 15)

Friday night during services, I spoke about the second verse above, which is part of what synagogues all over the world read the following morning. G-d makes promises to Avram and Avram says that so long as he has no children, the promises mean little.

There is some debate among the traditional commentaries about the meaning of "brought him outside." The great medieval commentator Rashi says that the literal explanation is that G-d brought Avram out of his tent so he could see the sky and attempt to count the stars. "So [innumerable] shall thy seed be."

Rashi goes on to suggest two other explanations. He suggests that G-d said "Get out of your astrology where the stars say that Avram will not have children for in fact Avraham will have children."

On a more fantastic level, Rashi says that G-d took Avram "outside the space of the world, above the stars" and told him to count the stars from that vantage point.

There are two versions of the Biblical punctuation on that verse and as I see it, one is more appropriate to Rashi's first explanation and the other for the third. That's part of what I am speaking about. (That, and that the more fantastic version seems more likely to be correct. After all, it was specifically described as a vision. And there was no need for a vision if the whole thing was "go outside and look at the stars.")

Malbim, who served as rabbi of a series of communities all over Europe in the 1800s, ran with the last of Rashi's ideas, which he referred to as "literal." I won't go into all the detail, but he says that since G-d has already told Avram that his seed will be numerous as the dust of the earth and that the "number" of dust is greater than the number of stars, He cannot be simply saying "count the stars" as a number.

He also pointed the obvious that by simply leaving his tent, Avram could not have seen "all the stars." For this, he would have to be  "outside the space of the world, above the stars."

Malbim says that G-d was saying (my translation here) "every one of your descendants will be an important world of his own and is to be counted on its own, just as G-d accounts for the stars with each as a world unto itself. And if one star were missing, it would affect the entire Creation. Similarly every Jew is a world unto himself and any who is missing affects the fullness (perfection) of the worldly structure.... and showed him that as G-d runs the world through the natural celestial system, with each star fulfilling its appointed purpose...," the importance of every individual, fulfilling his appointed purpose, is essential for the perfection of the universe.

That is why G-d adds "So shall thy seed be." Every one of critical importance, every one with a purpose.

A few days ago, I said a few words about this to my friend and colleague Lara Diamond and she said "Can you tie in genealogy?"

Eduard Riss
As it happened, at the same time I was having a look at Genteam's Vienna records for the first time in many months. Genteam made an announcement earlier this week about new records and I figured I should have a look.

I  did an "Overall Search" based on several spellings of Pikholz and got just over a hundred results, mostly births, deaths and marriages. They were transcribed extracts rather than records and often didn't even have the dates which surely appeared on the originals. Many were duplicates - one for the bride and one for the groom or one for the birth and one for the parent. 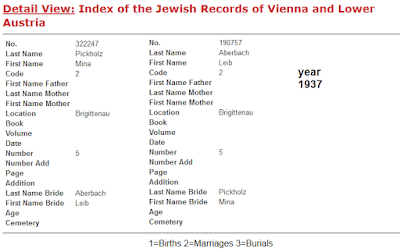 There were two for people I didn't know. This one for instance.

I have no idea who this Mina Pickholz is and although we have seen variations of Aberbuch in relevant records, this one doesn't seem to be connected to anyone we know.

The date does not appear, but it is on the "results" page, so I added it on the right.

This is the other: 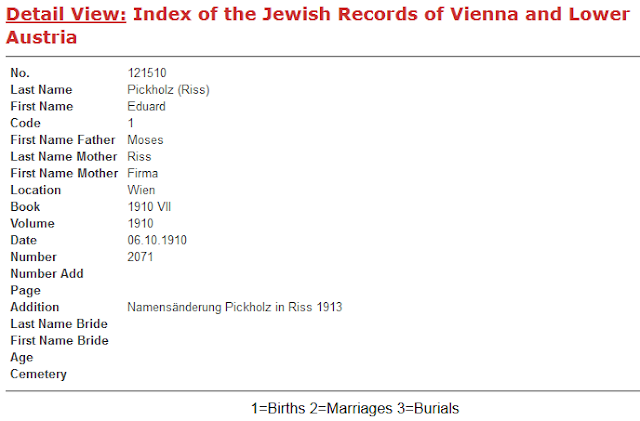 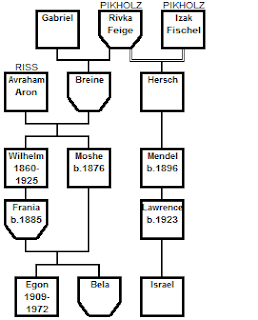 We know the family well. His parents - who are uncle and niece - had two other children whom I had heard about from family members. After Vienna, they lived in Cochabamba (Bolivia, for the uninitiated), but the local community says they are not buried there.

For the benefit of those of you who have not been here before, Breine Riss is the older half sister of my great-grandfather Hersch Pikholz. One of her younger sons, Moshe married the daughter - Frania - of his eldest brother Wilhelm.

Moshe and Frania's son Egon (there are three Egon Riss among Breine's descendants) appears in the Vienna birth  records. His sister Bela does not, so they may have left Vienna by the time she was born.

Egon and Bela are my half third cousins on Frania's side and my half second cousins once removed on Moshe's side. Both were married, neither had children.

Now this record for Eduard has shown up. In Vienna, in 1910. Clearly a third child of Moshe and Frania. But no one had ever mentioned him. I suppose he died young and the cousins I have been in touch with did not know he existed. (I checked this week with a ~94 year old daughter of Frania's sister.) Now we know at least that - and that apparently he did not die while his parents were still in Vienna. We know he lived at least until 1913, because the record says that his name was changed from Pickholz to Riss in 1913.

It's important to us genealogists to identify these family members, even those who died as children, and to learn what we can about them. Besides, as the Malbim tells us, each individual, fulfilling his appointed purpose plays a role in G-d's universe. Like every star.

Housekeeping notes
Program chairs - and people who know program chairs - please note. I have some open dates for my US trip in the winter, including Sunday 12 February. Weekdays are available between 23 January and 2 February, in the east and midwest. Several topics are available including the Lazarus-Endogamy talk which I presented in Seattle and a new one where DNA is not the main point of interest.