I suppose I should be writing at length about my mother - Beatrice (Batya) Pickholtz - but I am not up to that. At the funeral I wasn't either, speaking then mostly about Mother's death rather than about her life. But here is the basic bio.

Mother was born on the second day of Elul, 5686 (12 August 1926) in Vandergrift Pennsylvania, the youngest of the five children of Raymond and Sarah (Rosenbloom) Gordon. There were two grandfathers living in Russia, but the family - on both sides - lived mostly in Washington DC, with one aunt in New York.

They visited the family in DC fairly frequently, considering the times, and Mother was quite close with her older cousins who lived there. Mother also got her first real work experience in DC, where she spent several summers as a teenager. (Her Social Security card was issued there.) 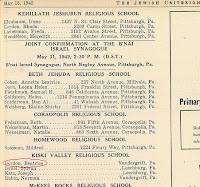 Mother was also permitted to attend a Jewish overnight camp, partly as compensation for her meagre Jewish education. She spoke of this experience - and other aspects of her childhood - in an interview with the investigative journalist David Bedein, while she was living in Beer Sheva. (That is not to say that there was no Jewish education whatever.  Mother attended Kiski Valley Religious School and was confirmed.)

Mother was accepted to the University of Pittsburgh and there met Betty Pickholtz, who introduced Mother to her brother, 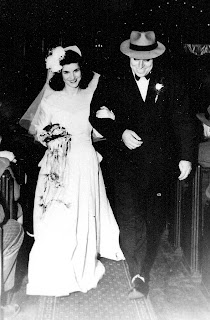 who had recently returned from the War. They married soon after, on 22 September 1946  at the Poale Zedeck Synagogue in Pittsburgh, where Father's parents were active members.

They moved into an apartment made out of someone's third floor on Shady Avenue and then into a small semi-detached house on Woodbine Street in Stanton Heights. And the children began coming.  There were five within their first seven years of marriage and by then they were in their third house, on Stanton Avenue.  We lived in that house nearly three-and-a-half years, a short time, but long enough for a major remodeling.

Mother did the bulk of the child-raising, as Father was on the road several days a week. And for those of you who have always admired her calm and patience,... well maybe I should just leave that alone. As the eldest, I was given alot of independence. (The kindergarten teacher was appalled that I was left to come home myself, from the very first day.) But under the circumstances, it couldn't have been much different.

After first grade, we moved one final time, to the house on Denniston in Squirrel Hill,

where we spent sixteen years and where the two youngest girls were born. Schools, shul, one set of grandparents and other family were within walking distance. 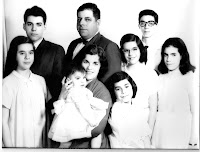 (Despite everything to do at home, Mother was very active in the school.)

They (I was out of the house by then and my brother remained in Pittsburgh) moved to Williamsport Pennsylvania and a year later - when the three older girls finished high school - to Israel. An absoption center in north Tel-Aviv, then a three-bedroom apartment in suburban Kiron. Father worked for Motorola. The three older girls were on programs that had them living away. And Mother was diagnosed with cancer. Surgery, treatments, I never needed to know the specifics.

After three years, they went back. With the two younger girls. They fully intended to return after Father's retirement and rented out the apartment. They rented and later bought in Skokie Illinois and Father went to work for Motorola, eventually securing a position which enabled him to visit the Israeli office (and the four children who remained here) several times a year. But Father had one heart attack too many and Mother was a widow at fifty-four.

But she had always intended to return to Israel and so she did, at age sixty, renting an apartment in Arad, where three of her children lived. One was killed in an accident two months later. (More on that sometime next week - I told you Shevat is a tough month around here.) After a year, Mother sold the Kiron apartment to the people who had been renting and bought the Arad apartment she had been renting and she lived there twenty years, as long as she had lived in her parents' house.

That third floor, three-bedroom apartment was her only home that most of the grandchildren ever knew. And they knew it well. As they got older, they would spend time there with Mother, without their parents, often several at a time. In their teen-age years, Mother had a full summer schedule of visitors, and as she got older, they were able to help her with whatever needed doing.  Mother had independent and individual relationships with each of her grandchildren, from eldest to youngest. And out-of-the-way Arad became part of the itineraries of family (and lots of non-family) visiting from abroad.

Eight years after Mother arrived in Arad, the cancer came back. It brought with it other health problems including a marked decrease in mobility.

Eventually, Mother decided she could no longer live alone and moved into a seniors facility in Beer Sheva, where she had her own 59 square meter apartment and an option to eat one meal a day in the dining hall. It worked for awhile, but after less than two years it became clear that she needed something with more personal attention. There was some discussion about going back to the United States, but - although Mother was prepared to do that if we all thought it best - she really wanted to be here. "Going back" would have been an admission of failure. 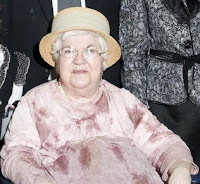 Mother's last twenty-seven months were in Jerusalem, first in a room for "independents" and later in a full care department at the same facility. The first ten months were very good, but after that things went downhill quickly and we thought that the end was close.  Then on Simhat Torah, from her fog, Mother said to me "I'm not ready yet" and a week or so later was sitting up having normal conversation. We had another fifteen months.  Some days better, some days worse, but she knew who everyone was and mostly she was clearly in control of her thoughts and her conversation. 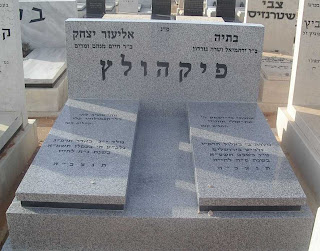 Often during those last months, Mother would tell me that Uncle George was coming, with her father's truck, from the furniture store.  To take her home. She looked forward to that.

And so he did. On Tu BiShevat morning, at five past eleven (four years nearly to the hour after her good friend Miriam Goldberg), at Hadassah Hospital.

We buried her the next day, next to Father, in the Segullah Cemetery in Petah Tiqva. I plan to go to the grave Wednesday, the fifteenth of Shevat. First time since sheloshim. Then again Friday, when we are to go to Judith's afterwards for brunch.