SOMETHING OF A DISSENT

After a series of posts about death, I decided it was time for one about life, before this blog gets a reputation for a grey backdrop that I had not intended.

And no, I am not a Luddite. At least not in this context. 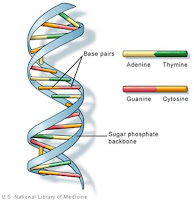 We learned about Drs. Watson and Crick and their four-colored ribbon back in high school and even then it seemed to be something special. Something like chemical fingerprinting, perhaps. And in time, it found all kinds of practical uses, including in criminal investigations, but this is quite different from testing for genealogy.

I think the first big use in genealogy was the study of kohanim, the descendants of Aaron the Priest, brother of Moses. It isn't anything I really got into, but from articles here and there, I understand that it seems to demonstrate that there is in fact a "kohen gene" passed down the Y-chromosome from father to son. 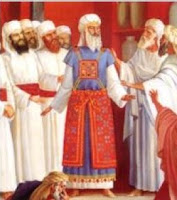 In fact, one of the most obvious challenges to the idea of an identifying kohen gene, may in fact support religious belief. The challenge says if a gene is passed from father to son, why wouldn't Aaron's brother Moses and his male descendants have it too? And Aaron's male cousins and their descendants - all the tribe of Levi. Then why not the descendants of the others of Jacob's sons?

In order to limit kehunnah to Aaron's descendants, to the excusion of the others, there would have to have been some kind of mutation affecting Aaron and his sons, but no one else. In fact, such a physical mutation fits with the idea that Aaron was not just a political appointment, but that some genetic transformation accompanied his becoming a priest, something that would forever genetically distinguish his line. I like that idea.

I don't suppose that if the Torah had come out and said that G-d altered Aaron's genes as part of the process described in the eighth chapter of Vayikra (Leviticus), it would have been understood, but I would not be surprised to find that the notion is hidden in the text in one way or another.

So what about DNA in our own practical genealogy? Well, when people began talking about that, it seemed to me like cheating, like looking at the answers in the back of the book. Real genealogy researchers look at books and records, they conduct interviews and visit cemeteries, libraries, courthouses and archives. And nowadays they use Internet sources. They don't do blood tests and cheek swabs. I knew, of course, that it wasn't that simple, but that became my response when people would ask me - especially non-genealogists who had read a puff piece in a magazine.

There was also the matter of cost effectiveness. When DNA testing for genealogy became a commercial reality, the costs were undeniably high.

And effectiveness? Well, first of all it was clear that only a very large database of DNA samples would make it likely to produce useful results. This would almost certainly take quite a few years to develop. And as multiple companies began to compete for this market, the potential very large database would inevitably be fragmented among those competing companies.

Second, it seemed to be limited to particular types of matches - the Y-chromosome which exists only in males with which you can make matches only in an all male line and the mitochondrial (Mt) sequence which can have a male only at the bottom of the line. But both of these issues can be solved with time, by increasing the size of the database and by technological progress.

But the most important problem for me was - and still is - one of principle. DNA testing deals in probabilities, not facts. Say they can prove that Steve Pickholtz and I are relatives. (Steve or Irene or Jacob or Rita or any of the other Skalat Pikholz families.) It cannot tell us that our great-great-grandfathers were brothers or uncle-and-nephew or first, second or even third cousins, with or without a degree or two of removal. But we are genealogists and we deal in facts, in documents, in evidence. DNA testing did not seem to be able to tell us anything with certainty about relationships five or more generations ago, which is what I would have wanted. After all, we can already trace most of the Skalat-Pikholz lines back about two hundred years, even without chemicals.

You look at the discussion list of the Association of Professional Genealogists and you see all this talk about precise documentation and citing sources. Nothing there about probability.  I have given a lecture called "BEYOND A REASONABLE DOUBT: What You Know vs. What You Can Prove" and I worry that if the "real pros" heard it, they'd throw me out of APG, because it isn't based on fully documented fact.

So in the mind of this ignorant layman I could not see much point in this whole business beyond perhaps giving a general sense of direction. Which I have anyway.

And of course the cost. Always the cost.

In fact, I did put my toe into the water. At the IAJGS Conference on Jewish Genealogy in Salt Lake City in 2007, I attended a lecture by a senior representative of one of the companies, but the email inquiries I made afterwards were never answered.

After my mother died last year, I began thinking more about our losing resources from previous generations and I thought it might be worthwhile to have a proper look at DNA testing as a genealogy tool. As it happens, the two lines about which I know the least are the two best suited for this kind of investigation.  My father's father's father got his Pikholz name from his mother, and we have no idea what his father's surname was. My mother's mother's mother's maiden name is also unknown, as she died when her children were young and her husband remarried soon after. So I began considering a Y-chromosome test for my father's paternal side and a Mt test for my mother's maternal side. 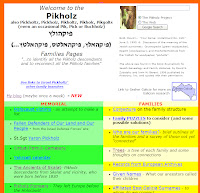 I also began considering who among the relatives would be the best candidates to test other lines of interest - either lines of my own family (or my wife's) or other lines in the Pikholz Project. Of course I could not even dream of approaching anyone else until I had gathered some experience from having myself tested. The relevant expression in Hebrew translates as "putting your money on the horns of a deer [as an investment]."

About that time, I saw an announcement of a free webinar on exactly that subject. The person giving the webinar is someone I had met, as is the president of the DNA-testing company she represents. So I signed up for the webinar.

I listened, I took notes, I asked some questions and received answers and assurances (remember, they didn't have their hands on my money yet) and a few days later I signed up for the Mitochondrial DNA Full Genomic Sequence tests, and the full Y-chromosome which checks 67 markers. I sent them my $470.20, which took into account a discount from my participation in the webinar. They called it a SuperDNA test.

After they analyzed my test results, they advised me that my Y-chromosome was R1b1a2 and my Mt showed I was in haplogroup U1. I figured that I should write those on my badge at the DC Conference, together with the family names I am researching.

In the weeks leading up to the Conference, I received a series of notifications about matches of 12 or 25 or 37 out of the 67 markers, always with numbers of variations. Each notification told me that they could not do more, because I had signed up (=paid for) only 67 markers. I learned how to use that part of the company's website that would allow me to contact those matches and I dutifully wrote to each. The results from those who replied were literally all over the map.  The closest DNA matches on my father's father's east Galician side were in Lithuania and Rumania and on my mother's Belarus side was in Slovakia.

I used the calculator on the company's site and found that the very best of the matches had something like a 14.5% chance of being related to me eight generations ago. Well.

At the Conference, I actually met a few of these folks, but couldn't hold an intelligent conversation with any of them, at least not about our 14.5%  chance of connections.

After the Conference, the notifications about matches stopped coming and I had more pressing matters to deal with and the DNA folder went to the bottom of the pile.

It is not supposed to be relevant from my understanding but I'm starting to
wonder if these folks have all this right or they are just making educated
guesses. Also not relevant is that my father's paternal line from what we
know has absolutely NO ROMANIAN line because we are Belorussian originally
from Latvia. My mothers side is 50% Romanian and many matches from my
Y-DNA show people of Romanian descent. How can this be?

I received another 25-marker Y-chromosome match a few days later and when I went into the company's website, I saw that it had been redone. The last thing I wanted to do was to relearn that. (For this, call me Ludd.)

I don't think I am exactly trying to swim against the tide here.  It's more like the electric nature of my research - it follows the path of least resistance. For now that does not include DNA. I have laid out my results where future testees can find them, so maybe something will come of it. But it won't be documented research.  I don't think it can be.
Posted by IsraelP at 11:54 AM