The inimitable Lara Diamond gave me a heads-up just before her most recent blogpost, telling me that she had seen some of my Pikholz (assorted spellings) in a Hungarian archival database she was writing about. She also sent me a Budapest death record which she had happened across.

The 9 December 1938 report of the death three days previous of Erzsebet Kornberger, wife of Jozsef Pikholz. She was seventy-two and her parents were Abraham Kornberger and Roza Korberg.

This looked familiar, but not quite as I remembered this person.

I have a Budapest birth record for Sara Rebekka Stefania born 24 August 1898 to Mozes Pikholz (mentioned in the notes on the record) and Erzsebet Kornberg, age 31 of Tarnopol Galicia. Close but no cigar.

We have additional information on this couple from their 1908 (late) Budapest marriage registration. We see Mozes' mother and birthdate, both of which we know from the Rozdol birth records. Erzsebet is called by a Jewish name "Lifsche" and she was born 30 May 1867 to Chaim Kornberg and Sara Rivka Stein. 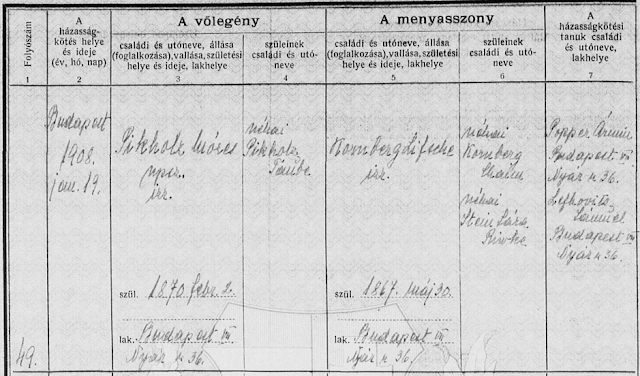 Lifsche's birthdate and parents' names (plus her maternal grandfather Eisig) appear in the Tarnopol birth records.

So are these two women the same person?

The ages look right. The surname Kornberg vs. Kornberger are within the norm of clerical error. (Mozes is dead by then, and he would have been the best source of information when his wife died.)

On the other hand, the husbands - Mozes and Jozsef - are different. We have no evidence of any Jozsef either in that part of the family or in any other Pikholz Budapest family. And the parents of Erzsebet/Lifsche are completely different - Chaim vs Abraham and Sara Rivka vs. Roza.

(I suppose it is possible that after Mozes Pikholz died, Erzsebet married Jozsef Pikholz, but I find that highly unlikely. And it only solves part of the contradiction.)

I really find it hard to believe that these are two different women, but the errors look too great to be clerical.

There is one other bit of information which seems to seal the deal. The address 36 Nyar Street appears for both. It appears on the 1938 death record, on the 1908 marriage record and on several birth records for the children.

As it happens, Mozes and Lifsche have a granddaughter living in Belgium. She has done DNA for our project and I am Facebook friends with her daughter. I do not assume that the granddaughter - who was born after the Holocaust - will be able to clarify this, but we shall ask.

In the meantime, I shall hold off on recording Erzsebet's death record in my database. And hope for the best.