Some weeks ago, a woman named Sherri contacted me via Ancestry.com. Ancestry said we were a very small match - 25 cM across six segments - and Sherri wanted to see if we could follow it up. She was already on GEDmatch, so I had a look.

GEDmatch showed a slightly larger match - nearly 32 cM over four segments, but still not much. Her mother's sister is also on GEDmatch, but she matched me even less, but with only a single segment of 11.8 cM on chromosome 12, where Sherri does not match me even at 3 cM.

I ran Sherri's kit against my families on the GEDmatch Multiple Kit Analysis, using a program called Short Keys to fill in my own kits. 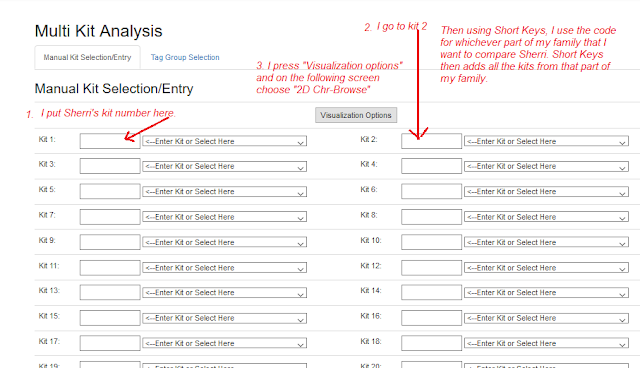 Sherri matches a few of my family members on my mother's side on three <12 cM segments, but all of these are matches with various cousins, none with me or my siblings. Sherri's aunt shares one of those three matching segments.

Then there was this, on my father's side. A nice segment of ~25 cM on chromosome 19, with eight of my family, not including me.

We have my brother and three of my sisters, my father's sister, two double second cousins (brothers) and my second cousin Susan. Susan nails this onto my grandmother's side, the one from Slovakia and Hungary. This is geography that Sherri didn't recognize from her own family. It is definitely Sherri's mother's side, as her aunt has this segment as well, although only ~11 cM.

And our match with Sherri is recent enough that a 25 cM segment has been preserved, despite that my Hungarian and Slovakian ancestors were in place at least since the mid-1700s.

(My guess is that Sherri matches my Hungarian great-grandmother rather than my Slovakian great-grandfather due to some other smallish matches she has with one specific cousin on each side, but I am way too conservative to jump to any conclusions here.)

So I asked Sherri about other family members who have tested and she mentioned a man we shall call *G, whom she has determined is her second cousin once removed. The relevant surname is Feldman from Belarus. Sherri's match with *G includes 37.4 cM on the segment we share on chromosome 19. That match is larger than even what Sherri shares with her aunt (31.4 cM).

My next step was to look at the Segment Search tool on GEDmatch. Like the Multiple Kit Analysis, this is a Tier1 tool, which requires a small payment. (I use GEDmatch enough that I generally pay for Tier1 12-18 months in advance.) 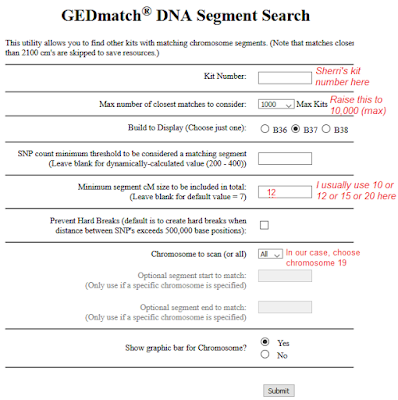 After removing the matches that are (or appear to be) from Sherri's father's side, these are Sherri's other matches on this segment. I removed the emails and kit numbers for privacy and coded the names for the same reason. 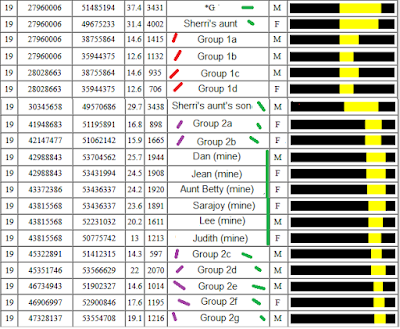 The four marked in red match Sherri's family members, but not my family - but they might if they were a bit longer. The seven marked in purple match Sherri's family and mine. The email for *G in the top row is one I recognized. It belongs to Leonid, whom I have mentioned here before. Our great-grandmothers have essentially the same given name and our maternal haplogroups are a perfect match. But that is a different part of our two families.

I wrote to the four people in Group 1 and the seven in Group 2, on the off chance that one of them may know something that can help connect the Belarus Feldmans to my Hungarian (or Slovakian) family. And of course I touched base with Leonid.

Thus far (after a week) I have heard back from the first two people in Group 1 and the first two in Group 2. None of them has been able to shed much light, but I see that they are more Sherri's Belarus/Lithuania, rather than my Hungary/Slovakia. It looks like my family is the outlier.

Besides telling the story, I am writing about this for two reasons. One is to give a bit more detail on the use of the GEDmatch tools Multiple Kit Analysis and Segment Search. The other is to bang the drum yet again for testing siblings. This inquiry began with a match between Sherri and me. But I do not share the interesting segment on chromosome 19. For that we needed my brother and some of my sisters. Without them, we don't find this.

Furthermore, although we usually place an emphasis on the older generations, had we only had Sherri's aunt and not Sherri herself, this segment would have been only 11 cM and I probably wouldn't have paid it any attention. But clearly Sherri's mother got a larger segment here than did her sister (Sherri's aunt). So once again, testing first and second cousins is of primary importance, but test the siblings too. Why? Who knows! There might be a difference in some segments that matter.